The need for economic rebalancing in the aftermath of the global financial crisis and the recent surge of capital inflows to emerging Asia have revived the debate about deeper financial integration in the region. On the one hand, financial integration is seen as an important tool to deepen regional financial markets, strengthen regional sources of funding, reduce the impact on Asian economies from negative shocks, and so allowing more “risk sharing,” and improve access of consumers and investors to financial services and, therefore, help rebalance growth by strengthening domestic demand. On the other hand, greater financial integration may imply larger risk of contagion from negative external shocks.

The need for economic rebalancing in the aftermath of the global financial crisis and the recent surge of capital inflows to emerging Asia have revived the debate about deeper financial integration in the region. On the one hand, financial integration is seen as an important tool to deepen regional financial markets, strengthen regional sources of funding, reduce the impact on Asian economies from negative shocks, and so allowing more “risk sharing,” and improve access of consumers and investors to financial services and, therefore, help rebalance growth by strengthening domestic demand. On the other hand, greater financial integration may imply larger risk of contagion from negative external shocks.

This chapter presents key findings from two working papers by IMF staff on these issues:15

A. Assessing the Degree of Financial Integration in Asia

Over the last decade, cross-border portfolio investment, foreign direct investment (FDI), and banking activities have been on an upward trend in Asia, as in other regions, except for a sharp decline during the global financial crisis of 2008—09. Relative to GDP, cross-border financial positions in Asia are comparable with other emerging economies of Latin America and Eastern Europe, but substantially smaller than in the euro area (the group of advanced economies that are the most financially integrated). However, cross-border portfolio investment in Asia is predominantly interregional (that is, with economies outside the region), especially after adjusting for the role of Hong Kong SAR and Singapore in intermediating inflows from outside the region (Figure 4.1).16

Controlling for a broad set of structural and cyclical factors confirms that Asian economies tend to be less financially integrated than other regions. We estimate what the degree of financial integration “should” be based on a set of country characteristics including trade integration, relative GDP growth, interest and exchange rate movements, and exchange rate volatility. We consider a panel of 90 advanced and emerging markets. Except for the financial centers of Hong Kong SAR and Singapore, the degree of financial integration of many Asian economies is below the level predicted by the model for all economies, and in several cases falls behind the norm for Latin America and Eastern Europe (Figure 4.3). Furthermore, a gravity-type regression of pair-wise cross-border portfolio investment on the same variables also suggests a lower degree of financial integration within the Asia region.17

B. Risk Sharing versus Contagion

An important potential benefit of financial integration is that it affords countries insurance against shocks. Through borrowing and lending, countries can stabilize their consumption around their long-term potential growth, even in the presence of idiosyncratic shocks. This “risk sharing” benefit remains low in Asia, however. Our measure of risk sharing captures the degree to which countries succeed in insuring each other against shocks—a perfect risk sharing implies no further potential gain from redistributing risk.18 The risk-sharing index for each pair of regions, which has a maximum value of one, is depicted in Figure 4.4.19 The newly industrialized economies (NIEs) share risks substantially with the United States, but much less so with other Asian economies. Meanwhile, intraregional risk sharing is below average for both NIEs and ASEAN. Among NIEs, only risk sharing between Hong Kong SAR and Singapore is above average, whereas Korea in fact achieves more risk sharing with ASEAN countries than with other groups of economies. Overall, the risk-sharing benefits enjoyed by all Asian economies, including China, Japan, and India (not shown), are dwarfed by those between the United States and the European Union.

Financial integration also has potential costs, particularly the greater risk of contagion, which can arise through interconnected banking sectors (Box 4.1) as well as through financial linkages more generally. As the recent global financial crisis illustrates, contagion costs can be large, calling into question the virtue of having an integrated financial market. To evaluate the trade-offs arising from financial integration we estimate an index of financial contagion (the lower the index the greater the contagion; see Rungcharoenkitkul, forthcoming, for details). Setting this index against the risk-sharing index in Figure 4.5 shows that there is a negative and statistically significant relationship between the two measures (green line), suggesting that more risk sharing can be obtained only at a cost of greater financial contagion risk. As Figure 4.5 reveals, however, there remains substantial room for most Asian economies to improve their trade-offs, thereby to enhance the “quality” of financial integration. The trade-off for the United States (red line) is noticeably superior, and in effect defines the efficient frontier. Most Asian economies, in contrast, have room to benefit more from risk sharing without incurring higher contagion costs.

One way to enhance the quality of financial integration is to further develop financial markets, and enable them to play a better risk-sharing role. Meanwhile, risk sharing should not be expected to contain the most extreme of shocks. Moreover, the ability of markets to provide insurance against even moderate shocks may be hampered by structural crosscountry differences in macroeconomic conditions and policy objectives. To test these hypotheses, intraregional risk sharing within NIEs, ASEAN, and the G-2 (the United States and European Union) are regressed against (i) the degree of intraregional financial integration; (ii) financial development, captured by stock market capitalization over GDP; (iii) the magnitude of real economic shocks, measured by deviations of industrial production growth from trends; and (iv) inflation rate differentials, which reflect differences in policy objectives. The fitted model is then used to decompose the contribution of each factor to the overall degree of risk sharing. As Figure 4.6 shows, policies that promote lower inflation differentials, contain volatility of real shocks, and foster financial development can go a long way in reducing this difference and therefore can help Asia attain a better trade-off between costs and benefits from financial integration.

Assessing the Contagion of Systemic Risk from Financial Integration through Banks

We exploit comovements of daily equity prices and CDS spreads among 20 large financial institutions across 10 regional economies to estimate the interconnectedness and the common dependence on external shocks. The analysis uses a probability-based model developed by Segoviano and Goodhart (2009) to analyze risk transmission and provides a systemic distress indicator measuring potential spillovers within and outside the region.1 The main results are as follows:

While the systemic risk from external vulnerability has remained low, the risk indicator has increased sharply since June, to levels similar to those observed during the Lehman Brothers episode, reflecting weakening global growth and U.S. and European debt turmoil. The risk indicator on Asian financial institutions has been highly correlated with global distress events, but the magnitudes appear to be smaller than for other regions (see IMF 2011a and 2011c).

Financial institutions in the region appear to be more exposed to distress from advanced economies outside the region than within the region (table), consistent with the pattern of low intraregional financial integration. If systemic distress occurred in the United States and Europe, it would likely have significant financial spillovers.

Greater quality of financial integration could yield significant benefits to Asian economies. Indeed, policies that can help enhance the benefits from risk sharing at a minimal risk of financial contagion are being pursued by many governments in the region and include:

Against this background, ongoing coordinated efforts by policymakers in the region to further develop common regional financial markets should continue to be a priority. The Asian Bond Market Initiative, for example, has already led to a notable expansion of the investor base.20 Combining these initiatives with ongoing efforts to promote convergence in macroeconomic policy objectives, such as through regional surveillance, peer review, policy discussions, and, ultimately, greater regional policy coordination, can help ensure that the benefits of financial integration are maximized for Asia.

Deeper financial integration with better access of consumers and investors to financial services would also strengthen domestic demand in the region and support economic rebalancing. Moreover, by facilitating the transfer of financial know-how, financial integration could foster financial innovation and lessen the motives for precautionary savings. Similarly, pressure for greater transparency exerted by foreign investors may reduce asset price volatility, as it would improve the quality and frequency of information (Prasad and Rajan, 2008). Model-based estimates using the macroeconomic balance approach (which analyzes structural determinants of savings and investment) suggest that if the degree of financial integration in Asia were to be at the global norm, on average across emerging Asia (excluding Hong Kong SAR and Singapore), the region’s current account surplus would be reduced by about 1 percent of GDP (Figure 4.7).

Further financial integration of Asian economies, in particular at the regional level, would strengthen Asia’s domestic sources of growth and improve economic resilience. In particular, policymakers should focus on ways to harmonize legal, institutional, and macroeconomic policy objectives and reduce discrepancies in the stage of development across different financial markets in the region. Such efforts would enhance risk sharing among regional economies at minimal cost of financial contagion, which is an inevitable by-product of greater financial integration. Deeper financial integration with better access of consumers and investors to financial services is also likely to support further economic rebalancing.

(In number of standard deviations from global mean)

Risk Sharing within and between Regions

Trade-Offs between Risk Sharing and Contagion 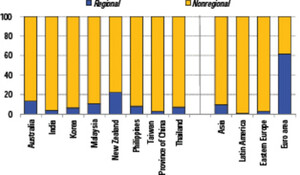 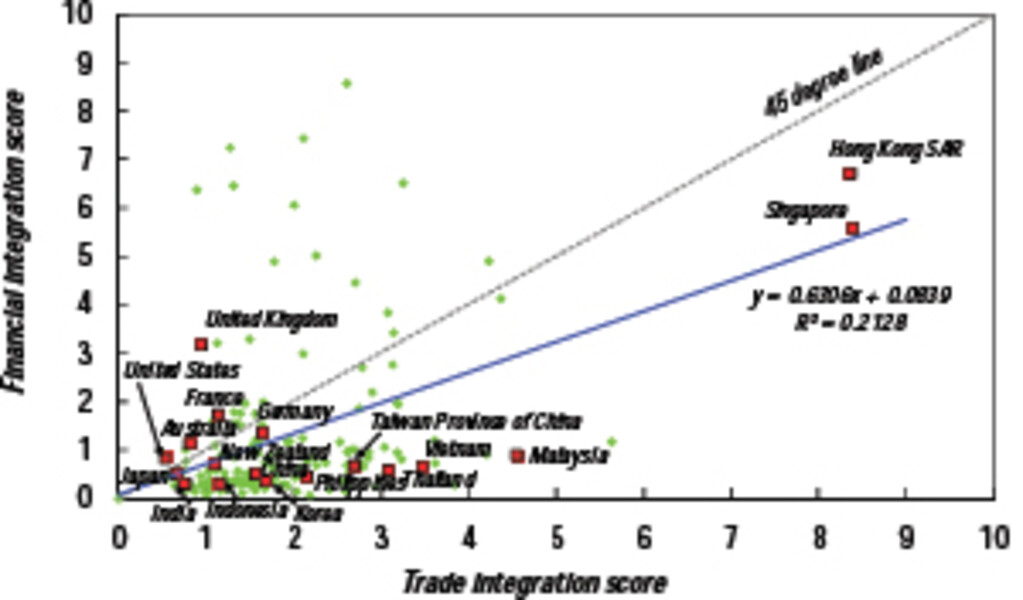 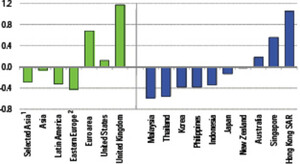 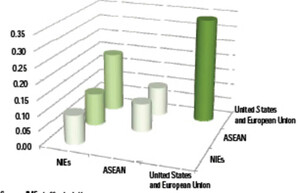 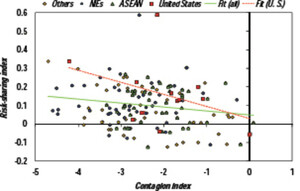 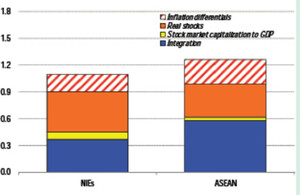 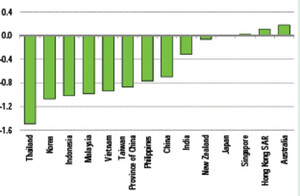