Credit growth is still relatively rapid across most of Asia (Figure 2.1). This may raise some concerns because, historically, episodes of rapid credit growth in Asia have been characterized by a higher incidence of crises relative to other emerging economies (Figure 2.2).4

Credit growth is still relatively rapid across most of Asia (Figure 2.1). This may raise some concerns because, historically, episodes of rapid credit growth in Asia have been characterized by a higher incidence of crises relative to other emerging economies (Figure 2.2).4

This chapter focuses on the following questions: When might an episode of rapid credit growth be associated with mounting financial imbalances? Are domestic or external factors more important in driving emerging Asian credit growth? At this juncture, what are the monetary policy challenges in terms of navigating near-term macroeconomic uncertainty while recognizing financial stability risks in the future?

The following main conclusions of this chapter are based on two working papers by IMF staff:5

A. Episodes of Rapid Credit Growth in Emerging Asia

Credit booms are episodes during which real credit to the private sector expands substantially faster than has been observed in previous expansions. To determine the occurrence of a credit boom, a pattern recognition algorithm is implemented using annual data going back to 1960.6 Specifically, a credit boom occurs when the deviation of real credit from trend is in the upper tail of the distribution. In Asian and non-Asian emerging economies, 16 and 44 booms were identified, respectively. In 2010, the last year of our sample, a boom was identified for Hong Kong SAR.7 Using an event study, credit booms that were associated with crises are differentiated from booms that were not. Figure 2.3 shows the typical evolution of these booms over seven-year windows centered at their peaks. Credit booms with greater deviations of credit from trend in the buildup phase are associated with disruptive busts. Typical credit booms last three years with a buildup, peak, and ending phase lasting one year each.

Credit booms are influenced by both domestic and external factors. Selected macroeconomic, financial, corporate, and banking sector indicators help to uncover warning signs that may help differentiate booms that ended more smoothly versus those that ended in disruptive credit busts (Figure 2.4). In terms of external factors, credit booms seem tightly interconnected with episodes of large capital inflows. Other (bank) flows—which tend to be less stable sources of financing and to have short maturities—increase during the buildup phase, particularly for booms that are followed by credit busts.

In terms of domestic factors, it seems that low policy rates have been associated with booms ending in disruptive credit busts (Figure 2.4). Low policy rates bring down the cost of borrowing, implying lower firm-level average interest rates, leading to increasing corporate leverage (debt-to-equity ratio). At the same time, lower prepeak interest rates tend to artificially boost firm-level valuations, which are then reflected in buoyant stock prices. This dynamic incentivizes excessive risk taking, borrowing, and looser lending standards, which seem to be related to the distinct increase in bank credit-to-asset ratios. Booms that were followed by particularly sharp reversals in key macroeconomic variables, including for example, domestic demand, seem to have been especially vulnerable to these bank and corporate balance sheet-related imbalances.

B. Domestic versus External Factors and the Role of Monetary Policy

While the event study suggests that domestic and external factors play an important role in determining how credit booms come to an end, it does not allow for the assessment of their relative importance in driving credit growth in emerging Asia. To do so, in this section, a structural vector autoregressive (SVAR) model is used. The model incorporates two blocks: (i) emerging Asia and (ii) the United States and euro area (taken as the foreign block), each including GDP-weighted averages of real GDP growth, CPI inflation, real credit growth, and the level of short-term interest rates. For each block, three shocks are identified: an aggregate supply, an aggregate demand, and a monetary policy shock.

Two main results are worth emphasizing:

To highlight the important role of domestic monetary policy in driving real credit growth in emerging Asia, two illustrative scenarios are developed. These scenarios are depicted in Figure 2.6, showing a two-year forecast horizon up to end-2012 in light blue, a gray shaded area corresponding to a growth recession (growth was below the sample average of 4.6 percent), the actual real credit growth rate, and its historical average. The horizontal red dashed line corresponds to a level of real credit growth which—based on the credit boom event study discussed in section A above—may serve as an illustrative warning threshold above which real credit growth may be excessive. The model-based forecast is the baseline, shown with the black line, and gradually converges to the historical average (albeit at a much slower rate after 2011). Focusing on the forecast horizon, the first illustrative scenario is shown with the blue line (along with 90 percent nonsymmetric confidence bands, shown by the dotted blue lines), whereas the second scenario is depicted with the orange line. Three points worth underscoring are as follows:

These scenarios serve to illustrate that the monetary response to the immediate macroeconomic downside risks should be balanced by a consideration of the risks associated with lingering financial imbalances over the medium term. Country-specific circumstances need to be recognized, but these illustrative scenarios highlight that if the current loose monetary policy stance within the region continues over the near term, it could exacerbate financial imbalances, which have a tendency to end abruptly. Tighter monetary policy stances could be usefully complemented by macroprudential measures as highlighted in the April 2011 Asia and Pacific Regional Economic Outlook.

The results discussed so far refer to the region as a whole, but there are important differences across economies, especially in terms of exchange rate regimes. The model was estimated for each country in the sample separately, allowing an individual breakdown of factors affecting credit growth. These factors were compared with various structural characteristics of the economies within the region. The results indicate that economies with more flexible exchange rate regimes (for example, Indonesia, the Philippines, and Thailand) are characterized by a lower share of external factors driving credit growth (the correlation is –60 percent). Greater exchange rate flexibility acts as a shock absorber by smoothing out cyclical fluctuations that affect credit dynamics, and also helps mitigate the buildup of financial imbalances.

Although credit growth has eased in recent months, it still appears elevated across emerging Asia. Although external factors such as global liquidity conditions matter, and increasingly so over time, domestic factors (including monetary policy) remain a more important driver of real credit growth in emerging Asia.

While near-term macroeconomic policy would be geared toward managing exceptionally uncertain global growth prospects, policymakers should remain focused on potential risks to financial stability and the real economy from lingering financial imbalances, including rapid credit growth. In particular, while they may have abated more recently, overheating pressures (which are associated with rapid credit growth) are still a concern in several economies including China, Hong Kong SAR, and Indonesia. Therefore, depending on country circumstances, policymakers should be prepared to use monetary, macroprudential, and exchange rate policies to limit financial imbalances that could eventually jeopardize macroeconomic stability.

(In percent of respective booms)

(In percent, deviation from trend)

Emerging Asia: Real Credit Growth and the Role of Domestic versus External Factors 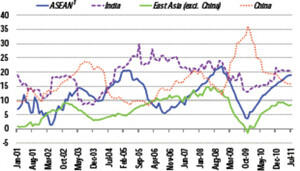 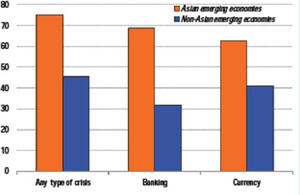 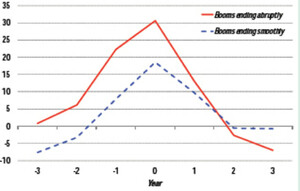 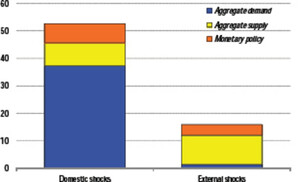 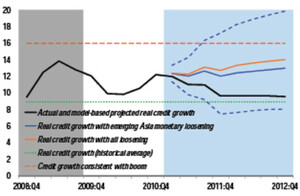