The course of the global economy in FY2008 was shaped by the interaction of three powerful forces: an escalating financial crisis slowed growth in some of the advanced economies, growth in emerging market and developing economies continued at a brisk pace, and inflationary pressures intensified throughout the world, fueled in part by soaring commodity prices. Overall, global GDP measured at purchasing power parity exchange rates increased by 4.9 percent in 2007—well above trend for the fourth consecutive year (Figure 2.1). From the fourth quarter, however, activity decelerated in the advanced economies, particularly in the United States, where the crisis in the subprime mortgage market affected a broad range of financial markets and institutions. Although growth in emerging market and developing economies also slowed beginning in the fourth quarter of 2007, it remained robust, by historical standards, across all regions.

Foreign exchange markets were also affected by developments in financial markets. The real effective exchange rate of the U.S. dollar declined sharply from mid-2007, as foreign investment in U.S. securities was dampened by the weakening of U.S. growth prospects and expectations of interest rate cuts. The currencies of a number of countries that have large current account surpluses—for example, China and oil-exporting countries in the Middle East—continued to be managed. The main counterpart of the dollar’s depreciation has been an appreciation of the euro, the yen, and other floating currencies, such as the Canadian dollar and some emerging market currencies.

The sharp increase in prices for primary commodities, particularly for food and oil, pushed up headline inflation in virtually all of the Fund’s member countries, with spillover effects into core inflation, especially in emerging market economies. Surging food prices have compressed real income, especially in countries for which food represents a larger share of consumption baskets. While oil exporters have benefited from record oil prices, some net oil importers have seen their trade balances deteriorate and growth prospects weaken.

Spillovers from the credit deterioration in the U.S. subprime mortgage market led to a full-blown liquidity crisis in term-funding interbank markets in August 2007. By October 2007, key central banks had begun taking aggressive policy actions, including providing liquidity to troubled institutions, that helped calm markets temporarily. However, pressures rekindled and intensified toward the end of 2007 as major financial institutions began to report substantial losses, notably from exposures to securities related to subprime mortgages. Market deterioration was compounded by signs that the U.S. economy was slowing. The crisis continued to spread as systemic concerns were exacerbated by a deterioration of asset credit quality, a drop in the valuation of structured credit products, and a lack of market liquidity accompanying a broad deleveraging in the financial system.

Central banks in the advanced economies found themselves caught—to different degrees—between rising inflation pressures and slower growth prospects, and striking the right balance depended on country or regional circumstances. A number of central banks eased monetary policy, most dramatically in the United States, where the U.S. Federal Reserve lowered the federal funds rate by 300 basis points between August 2007 and April 2008. The pace of activity in the United States declined sharply in the fourth quarter of 2007, and consumption and business investment softened markedly as sentiment soured and lending conditions tightened. Growth in 2007 was only 2.2 percent, down from 3 percent in 2006, and fell further, to about 1 percent, in the first quarter of 2008 as the correction in the U.S. housing market led to a contraction of residential investment and household consumption slowed markedly. Rising oil prices contributed to the dampening of consumption while boosting 12-month headline inflation to more than 4 percent in late 2007 and early 2008. The weakening of growth prospects in the United States relative to its trading partners and expectations of interest rate cuts dampened foreign investment in U.S. securities, putting downward pressure on the dollar. The dollar’s depreciation vis-à-vis the euro, the yen, and other floating currencies, such as the Canadian dollar and some emerging market currencies, boosted net exports, the one area of strength in the U.S. economy, and the current account deficit of the United States moderated somewhat, to 5.3 percent of GDP in 2007. (Figure 2.3 shows current account balances for different countries and regions as a percentage of world GDP.)

For most of 2007 and in early 2008, activity in the advanced European economies continued to expand at a robust pace. Strong domestic demand was fueled by steady employment growth and buoyant investment. The euro area as a whole recorded annual economic growth of 2.6 percent in 2007, close to the rapid pace achieved in 2006, while growth in the United Kingdom registered a strong 3.1 percent increase despite strains in the banking sector. In the first quarter of 2008, euro area growth accelerated to almost 3 percent, notwithstanding deteriorating consumer and business sentiment in response to financial sector dislocation, the impact of rising oil prices on real disposable income, euro appreciation, and a weakening export market. The Bank of England responded to weaker growth prospects by lowering interest rates, but the European Central Bank kept policy rates steady.

Throughout FY2008, financial conditions in most emerging market countries continued to benefit from those countries’ improved macroeconomic fundamentals and stronger public sector balance sheets. However, some countries—notably those in emerging Europe12 where domestic credit growth had been fueled by external funding and large current account deficits needed to be financed—came under market pressure. While emerging market sovereigns remained broadly resilient to the financial turbulence in mature economies, and bank lending continued to be strong through the fourth quarter of 2007, emerging market corporate bond issuance slowed sharply in the third quarter of 2007 and remained subdued in early 2008, while the cost of funding rose (Figure 2.4).

Growth in emerging Europe moderated by almost a full percentage point, to 5.7 percent, in 2007 but exceeded growth in the advanced European economies for the sixth consecutive year. In most of the emerging European countries, growth continued to be driven by buoyant domestic demand, which again substantially outpaced production in 2007. As a consequence, the region’s overall current account deficit widened to 6.7 percent of GDP. Demand continued to be supported by strong credit growth fueled by capital inflows and—in many countries—vigorous wage growth, as labor market conditions tightened further. Inflation pressures increased, especially toward year-end, because of rising food and energy prices and increasing labor costs. Most central banks in emerging market economies continued to tighten monetary policy in response to building inflationary pressures.

Real GDP growth was sustained at 8.5 percent in the Commonwealth of Independent States13 in 2007, as high commodity prices, expansionary macroeconomic policies, strong capital inflows during most of the year, rapid credit growth, and rising asset prices fueled strong growth in domestic demand.

Growth in emerging Asia remained strong throughout 2007, although with some signs of softness, especially in early 2008. External surpluses continued to be large. Growth was led by China, where output expanded by 11.4 percent (year over year) in 2007, driven by consumption, strong investment growth, and net exports. Growth in India slowed modestly, to 8.5 percent (year over year) in the second half of 2007 as consumption cooled in response to tighter monetary policy, although investment continued at a brisk pace. The strength of domestic demand in the region, combined with rising food and energy prices, contributed to a buildup of inflation pressures in a number of countries.

Economic activity in Latin America and the Caribbean grew by a robust 5.6 percent in 2007, slightly stronger than in 2006. The U.S. slowdown dampened growth in neighboring Mexico, but growth remained high in Central America and in commodity-exporting South American countries while accelerating markedly in Brazil, amid sustained declines in real interest rates and strong employment. Increased domestic demand has been the main driver of growth in the region. Current account surpluses have declined, and inflation has accelerated, driven by high capacity utilization in some countries and by rising food prices.

Building on the largest period of sustained economic growth since independence, the pace of economic activity in sub-Saharan Africa accelerated to 6.8 percent in 2007, led by very strong growth in oil-exporting countries and supported by robust expansion in the region’s other economies. In non-oil-exporting countries, activity was boosted by domestic demand and investment in particular, the payoff from improvements in macroeconomic stability and the reforms undertaken in most countries.

Growth in the Middle East also remained strong, reaching 5.8 percent in 2007. Although increases in oil production were limited, high world oil prices supported greater government spending in exporting countries and strong expansion of credit to the private sector. Despite the growth of domestic spending and imports, the large current account surpluses in the oil-exporting countries narrowed only slightly—to about 22.8 percent of GDP—as higher oil prices boosted export revenues; the currencies of these countries continued to be pegged or tightly managed. Growth was even stronger in some of the non-oil-exporting countries in the region, spurred by trade, financial spillovers from oil-exporting countries, and domestic reforms. Inflation pressures rose considerably in the Gulf Cooperation Council (GCC)14 countries because of strong domestic demand, rising food prices, supply constraints in the real estate market leading to higher rents, and interest rate cuts (the latter to match developments in major advanced economies, as required under the GCC countries’ pegged exchange rate regimes).

(Percent change from a year earlier)

(In percent of world GDP) 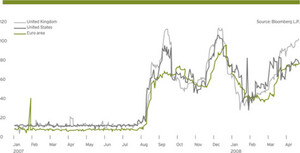