Critical external factors for Latin America include external demand, interest rates in advanced countries, investor risk appetite (or alternatively, global liquidity), and commodity prices. In the econometric model underlying this section, these factors are proxied by world growth, U.S. treasury bill rates, the high-yield corporate bond spread in the United States, and a trade-weighted index of commodity prices that are relevant for Latin America. As a measure of Latin American growth, a weighted index for Argentina, Brazil, Chile, Colombia, Mexico and Peru—referred to as the “LA6” in the remainder of this section—was used.9 In addition, the model included the Latin America subcomponent of JPMorgan’s emerging market bond index, which is influenced both by external financing conditions and domestic fundamentals in Latin America.10

The results shed light both on the relative contribution of external shocks to fluctuations, and the typical effects of particular shocks on Latin America. External factors are estimated to account for at least half of the medium-term variance of Latin American GDP growth. Within these, external financial conditions are the biggest influence (accounting for about 35 percent), followed by world growth shocks (10–15 percent) and commodity price shocks (5–6 percent). The model also suggests “rules of thumb” for the effect of external shocks on Latin American growth. The overall impact of a world growth shock on Latin America is roughly one-for-one (including lagged effects). One-standard-deviation shocks for commodity prices and the Latin EMBI—namely, changes of about 5 percent and 115 basis points, respectively, within one quarter—are estimated to lead to a change in Latin American growth of around 0.4–0.5 percentage point. The effect of a standard deviation shock in the U.S. high-yield bond spread (90 basis points) is estimated to be even higher (0.9 percentage point).

In addition to generating these results, the model provides a vehicle for forecasting LA6 growth under various assumptions about the paths of the external variables. As a consistency check, the average growth forecast for the LA6 based on the WEO projections presented in this Regional Economic Outlook (Section II and main economic indicators table) was first compared with the model’s “baseline forecast” conditional on WEO projections for world growth and commodity prices. The two forecasts turn out to be very close.

The next step is to examine a number of scenarios for the external environment, which seek to quantify the risks to Latin American growth briefly described in Section II. Specifically, four types of risks are considered, consistent with the WEO:

Each scenario is represented by a hypothetical path (or set of paths) of the external variables in the model. The following subsections briefly describe both these paths and the corresponding forecasts generated by the model, and compare them with the model’s forecast under baseline assumptions.

As described above, alternative world growth paths include (i) moderately stronger growth than assumed under the baseline, representing the effect of a smaller-than-expected slowing in U.S. growth on world growth; (ii) moderately slower world growth, representing the response of world growth to a similar shock of the opposite sign; and (iii) a sharp downturn in world growth, assumed to go along with a widening of the high-yield corporate bond spread in the United States by 400 basis points. These growth paths are taken from simulations by staff of the IMF Research Department discussed in the April 2007 and September 2006 issues of the WEO (Chapter 4 and Box 1.3, respectively). To isolate the effect of the three scenarios from changes in commodity prices, the baseline scenario for commodity prices is maintained in each of these cases.

Of the three growth scenarios, only the sharp world slowdown would have a significant impact on Latin American growth. In particular, a larger-than-expected slowdown in the United States that falls short of a recession would have a muted impact on LA6 average growth (largely because its impact on world growth would be minor). Moreover, a U.S. slowdown would in part be offset by changed monetary conditions, as the model forecasts U.S. short interest rates to fall/rise when growth slows/accelerates. Emerging market risk premia would scarcely be affected, so that financing conditions would remain broadly favorable. In contrast, the much sharper shock to world growth associated with a disruptive adjustment of global imbalances would not only have stronger effects through trade links, but would also be expected to lead to sharply higher risk and maturity premia in the United States (here, represented by a spike in the U.S. high-yield bond spread). This, in turn, would affect Latin American growth both directly and through higher EMBI spreads. Hence, the model forecasts a severe downturn in Latin America, with four-quarter growth falling to less than 1 percent by early 2008, and average growth falling to about 2¾ percent in 2007 and 1½ percent in 2008.

The WEO baseline for nonfuel commodity prices already envisages a moderate decline during 2007 and 2008. The question is how Latin American growth would react if nonfuel commodity prices experienced a larger fall, for example, say, to end-2005 levels (approximately 20 percent below end-2006 levels, in terms of the LA6 net commodity export index used to estimate the model) or end-2003 levels (an approximately 50 percent decline relative to end-2006, undoing the sharp rise in prices from which Latin America has benefited over the course of the most recent expansion). To focus on the effect of commodity price corrections, both scenarios retained the baseline world growth path, while the remaining variables were allowed to adjust endogenously.

The model predicts that a 20 percent fall in commodities prices in early 2007 would lead to noticeably lower, but still robust growth in Latin America (about 3½-3¾ percent on average in 2007 and 2008). In contrast, a 50 percent decline would lead to a severe slowdown, of almost the same magnitude as a disruptive unwinding in global imbalances. Four-quarter growth would fall to around ¾ percent by mid-2008, while average growth would decline to 3 percent in 2007 and about 1¼ percent in 2008. This mainly reflects the direct effect of net commodity export income on the economy, but also indirect effects through less favorable financing conditions, via EMBI spreads. The latter could reflect the impact of sharply lower terms of trade both on the trade balance—a 50 percent commodity shock would imply that trade surpluses would be erased, removing one important element that currently provides comfort to external investors in Latin America—and on the fiscal accounts, by significantly reducing primary surpluses (see the November 2006 Regional Economic Outlook and Section II).

Finally, a scenario illustrating much tighter emerging market financing conditions was considered, in the form of a 400-basis-point shock to the Latin EMBI spread and a 200-basis-point increase in the U.S. high-yield bond spread—close to the changes in these variables during one of the major “sudden stop” events of the 1990s. Unlike a disruptive adjustment in global imbalances, this financing shock was not assumed to impact industrial country growth. Hence, the scenario isolates the effects of a “pure” emerging market financing shock from a global crisis involving a growth decline in all major regions. The model suggests that a financing shock would significantly reduce growth in Latin America, but by less than either a global crisis or a 50 percent drop in commodity prices. On an annual basis, the model predicts growth to drop to just under 3 percent in 2007 and to about 2¾ in 2008. In practice, this is likely to overestimate the average impact of a financing shock on LA6 growth, as it is based on the reaction of the LA6 to the EMBI during the 1994-2006 period, in which these countries for the most part suffered from higher macroeconomic vulnerability than they do today.

As can be seen from the figures, all forecasts involve a probability distribution, denoted by blue and gray shading, in addition to a central conditional forecast which represents the median of the distribution (the 50th percentile). By assigning probabilities to the various scenarios, it is possible to generate a single risk-weighted probabilistic forecast (see Österholm, 2006), for a technical description.11 The “fan chart” presented in Section II is an adaptation of this probabilistic forecast, in which the probability distribution has been drawn around the staff’s baseline forecast. As shown in that chart, the overall risk is moderately tilted to the downside, reflecting the fact that while some (albeit unlikely) scenarios could lead to much lower-than-projected growth in Latin America, there is no offsetting scenario—given the already benign current conditions—that involves much higher growth in the short run (though moderately higher-than-projected growth is of course a possibility). Even so, the model suggests that a growth outcome below 3 percent in 2007 or 1¾ percent in 2008 is very unlikely (less than a 5 percent probability).

The analysis of this section supports two main conclusions.

Reducing Latin America’s vulnerability to such shocks is to a large extent a matter of increasing its resilience to fluctuations in international financing. Governments have taken significant steps in this direction in recent years, leading to improved economic institutions and policy frameworks, primary fiscal surpluses, safer debt structures, and more flexible exchange rates. These provide a measure of assurance that the region’s finances would remain solid even in the event of a sharp deterioration in the external environment. However, as governments in the region recognize, further action is needed, particularly in lowering public debt further, making budgets more flexible, and ensuring the resilience of financial systems (see Section II and the November 2006 Regional Economic Outlook).

The LA6 group represents about 90 percent of Latin American output. Together with Venezuela, which was excluded because of its different economic structure, it includes the largest economies in the region. For results with respect to individual Latin American countries, see (Österholm and Zettelmeyer 2007).

A real effective exchange rate index for the region was initially also included, but had no effect on the results.

For the four growth scenarios (moderately higher, baseline, moderately lower, and global crisis), a probability distribution of 0.15, 0.575, 0.25 and 0.025 was assumed; for the three commodity price states (baseline, 20 percent decline, and 50 percent decline), probabilities of 0.88, 0.10 and 0.02 were assumed; and an emerging market financing shock was assumed to occur with probability 0.05. Combinations among these events were also allowed. 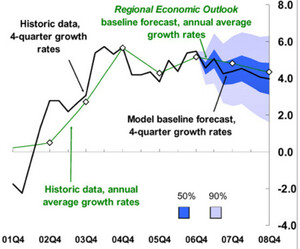 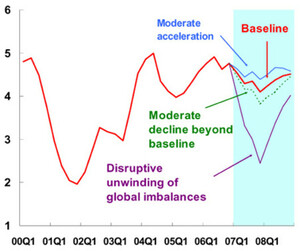 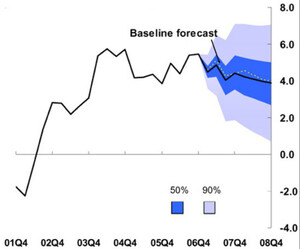 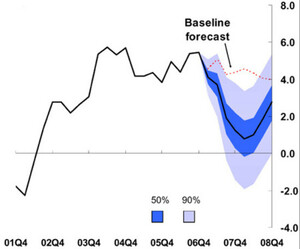 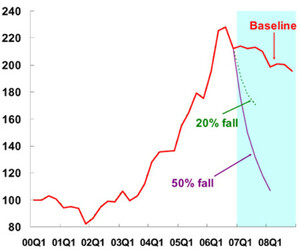 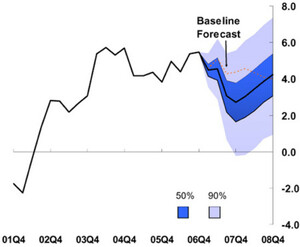 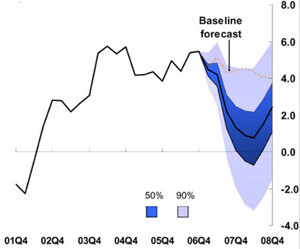 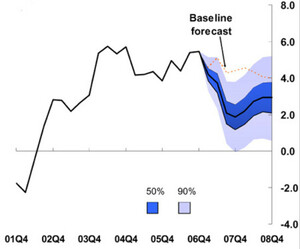