Jump to Content Jump to Main Navigation
I. The Global Economy and the Outlook for the United States and Canada
Author: International Monetary Fund. Western Hemisphere Dept.

Expectations of continued solid economic growth and fading inflation concerns contributed to buoyant global financial conditions in the latter half of 2006 and early 2007. Strong earnings growth pushed advanced economy equity markets to new highs. At the same time, long-term bond yields remained low and spreads on risky assets narrowed, with volatility reverting to historically low levels (see the April 2007 Global Financial Stability Report). On the back of these positive developments, emerging bond and equity markets recuperated from the turbulence in May–June 2006 and pushed on to new highs. However, equity markets underwent a correction in late February and early March 2007 in reaction to a sudden global retreat from risky assets—including emerging market equities. The increase in volatility provided a reminder that unusually favorable financial conditions could reverse rapidly.

The world economy is, nevertheless, expected to continue to grow robustly in 2007 and 2008. With the current expansion entering its fifth year, global growth is forecast to moderate to just below 5 percent in 2007, more in line with potential. The modest slowdown is expected to be driven mainly by the advanced economies. Growth in emerging market and developing countries is projected to continue at a rapid pace, supported by still-favorable financial conditions and relatively high nonenergy commodity prices, while somewhat lower oil prices in the near term are expected to support growth in oil-importing countries.

Although the prospects for the world economy continue to be favorable, risks remain weighted moderately to the downside. Besides the possibility of more far-reaching spillovers from the housing market to other sectors of the U.S. economy (see below), there are other risks for the world economy. These include: (i) the potential for more financial market volatility, prompting further retrenchment from risky assets; (ii) possible supply shocks in the oil market; and (iii) the low-probability but high-cost risk of a disorderly unwinding of global imbalances. In the April 2007 World Economic Outlook, IMF staff estimate that there is a one-in five-chance that world growth will fall below 4 percent in 2008.

Commodity-rich countries—including those in Latin America—face the additional challenge of softening export prices, although many commodity prices remain high by historical standards.

The Outlook for the United States and Canada

The slowdown in the U.S. economy continued in the fourth quarter of 2006, with growth of 2.5 percent (on an annualized basis), ½ percentage point higher than in the previous quarter. Real GDP growth for the year as a whole was 3.3 percent, similar to that in 2005. Fourth-quarter growth was underpinned by strong consumption—sustained in turn by continued employment growth and declining energy prices—and a turnaround in the growth contribution of net exports. But a decline in residential investment as well as a slowing in business investment—unexpected in the face of continued strong profits and easy financing—and a drag from inventories represented dampening influences. The current account deficit narrowed to 5¾ percent of GDP in the fourth quarter on lower oil prices and a better non-oil trade balance.

Thus far, the U.S. economy has been resilient to the slowdown in business investment and the housing market (Box 1), even though the slowdown in the latter has been sharper than forecast at the time of the November 2006 Regional Economic Outlook. In particular, the slowdown in the housing market has so far had limited fallout on consumption, as a strong labor market has sustained household incomes and low long-term interest rates have contained household debt service. Recent market turbulence, including a rapid rise in spreads on risky subprime mortgage instruments in response to rising default rates, has exposed lax lending standards at the end of the housing boom. Although the impact on broader markets has been modest to date, there are concerns that easy lending standards may have been more widespread than currently evident and risks will need to be closely monitored.

The Slowdown in the U.S. Housing Market

The rate of house price appreciation in the United States declined sharply over the course of 2006, and activity in the housing market weakened dramatically. Sales of new and existing homes came off their recent peaks, and residential investment fell 11 percent between the first and the fourth quarters. Despite some signs that the decline of residential construction is slowing, the outlook for the housing market has been complicated by problems in the subprime mortgage market, where foreclosures may add to supply and prolong the residential investment cycle.

Overall mortgage delinquency rates have started rising, but still remain at a very low level. A more pronounced spike has been observed in the subprime segment (which refers to riskier loans made to borrowers with tarnished credit histories, limited documentation, etc.) that grew rapidly in recent years. With the liquidity of the housing market already curtailed by stalling house prices and tightening lending standards, subprime delinquencies are expected to rise further. Although the level of delinquencies is not out of line with past experience, the trend has led to a marked spike in spreads on assets linked to the riskier portions of such loans. These difficulties have also taken a heavy toll on the originators of such mortgages. At the moment, the spike in spreads has remained contained to relatively small and risky parts of the U.S. bond market, and the impact on the overall financial system has been limited. There remains a concern, however, that problems in the subprime mortgage market may lead to a more significant tightening of consumer credit, thereby putting household finances under greater strain, or be symptomatic of loose lending and underwriting standards over a broader range of markets, which could lead to a more general tightening of U.S. and global financial conditions that would put downward pressure on activity.

Note: This box was prepared by Vladimir Klyuev.

Looking forward, the U.S. economy should continue its “soft landing” in 2007, with growth gradually recovering toward potential (around 3 percent) thereafter. Softness in late 2006 and early 2007 is expected to bring the growth rate to close to 2¼ percent for 2007 on average and just under 3 percent for 2008. Baseline projections envisage a gradually fading impact from the housing market correction, with only a modest slowing of consumption growth. However, the financial market fallout from problems in the subprime market could take a more significant toll on construction and household spending, while business investment could also continue to falter if lending conditions tighten more generally.

Recent tax buoyancy as well as lower-than-expected spending on Medicare, defense, and debt service have improved U.S. fiscal prospects in the near to medium term. The FY2008 budget now targets the elimination of the federal budget deficit within five years, through expenditure restraint. As the U.S. Administration acknowledges, broad-based entitlement reform is still needed to ensure long-term fiscal sustainability in the face of an aging population and rising medical costs. Particularly if combined with supportive policies by other countries, deficit reduction would also help reduce global imbalances and mitigate the risk of their disorderly resolution.

In Canada, the economy grew close to potential in 2006, and unemployment declined to a 30-year low of 6.1 percent. The boost to activity from rising commodity prices has been offset by a roughly 35 percent nominal effective appreciation in the Canadian dollar over the last few years. Headline inflation, which was earlier pushed up by higher energy prices, has fallen to around 2 percent, also in response to a cut in the goods and services tax in July 2006. High income tax elasticities and spending restraint have led to an estimated federal budget surplus of ¾ percentage point of GDP for fiscal year 2006/07, despite tax cuts.

The outlook for 2007 and beyond remains broadly favorable. While the Canadian economy has recently slowed, partly owing to weaker U.S. activity, growth is expected to pick up to 2½ percent for 2007 as a whole and to return to potential in 2008. Thanks to a strong policy framework—including the recently renewed inflation targeting regime, and a medium-term debt reduction target—inflation of around 2 percent and small fiscal surpluses are projected for the next several years.

Throughout the text, all data on country groupings are weighted averages based on countries’ GDP at purchasing power parities (PPP), unless noted otherwise. For the external accounts, GDP at current prices and market exchange rates is used.

Equity Markets in the U.S., Europe, and Japan 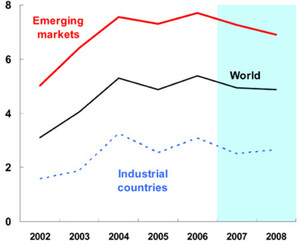 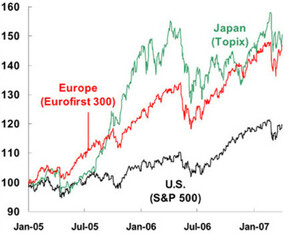 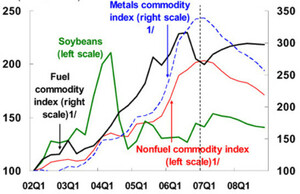 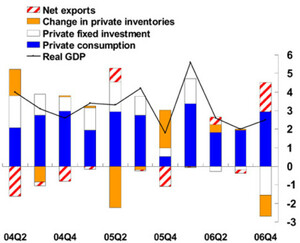 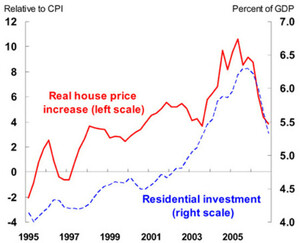 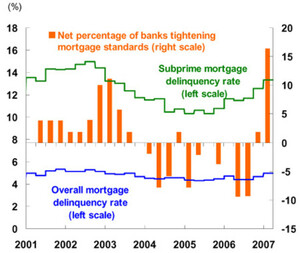 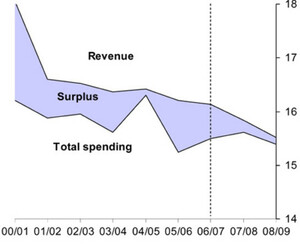