A distinguishing feature of emerging market crises in the 1990s and early 2000s was the sudden disruption in the capital accounts of key sectors of the economy. Capital account crises typically occur as creditors quickly lose confidence, prompting sudden and large-scale portfolio adjustments such as massive withdrawals of bank deposits, panic sales of securities, or abrupt halts of debt rollovers. As the exchange rate, interest rates, and other asset prices adjust, the balance sheet of an entire economy can sharply deteriorate.

A distinguishing feature of emerging market crises in the 1990s and early 2000s was the sudden disruption in the capital accounts of key sectors of the economy. Capital account crises typically occur as creditors quickly lose confidence, prompting sudden and large-scale portfolio adjustments such as massive withdrawals of bank deposits, panic sales of securities, or abrupt halts of debt rollovers. As the exchange rate, interest rates, and other asset prices adjust, the balance sheet of an entire economy can sharply deteriorate.

These crises highlighted the need for closer attention to vulnerabilities in sectoral balance sheets. As a result, the International Monetary Fund (IMF) intensified development of the balance sheet approach (BSA) to examining macroeconomic vulnerabilities.

Since the start of this more intense effort in 2002,1 the BSA has been increasingly applied as part of the IMF’s bilateral surveillance activities (Box 1).2 This paper draws on this experience and on progress made in meeting the data demands for the BSA in order to draw lessons for the most effective framework for this type of analysis. The main objectives are to provide guidance on how best to design the analytical framework—in terms of delineation of sectors and financial instruments—in order to address particular country circumstances, and to give an update on recent improvements in statistical methodologies and data availability that are enhancing the BSA’s potential as a surveillance tool by allowing for a more detailed and timely analysis.

The BSA examines the balance sheets of key sectors of an economy in a framework that facilitates the identification and analysis of vulnerabilities. It tries to explain the dynamics of a capital account crisis by examining stocks of assets and liabilities. As such, the BSA departs from the traditional financial programming approach whose flow-based analysis examines the build-up of unsustainable fiscal and current account positions over time. By focusing instead on shocks to stocks of assets and liabilities, which can trigger large adjustments in capital flows, the BSA can be a useful complement to the traditional flow analysis. As such, it encourages analysts to look more broadly in monitoring and assessing economic and financial conditions.

The basic sequence of accounts of the IMF’s System of National Accounts 1993 (known as the 1993 SNA) provides the internationally accepted, comprehensive, and integrated framework for both flows and stocks for an economy and, thus, the BSA (Figure 1). The current accounts at the beginning of this sequence record the production of goods and services, income generation and distribution, and use of income for consumption and saving. This is followed by the accumulation accounts that record the acquisition and disposal of financial and nonfinancial assets and liabilities, and changes in net worth. Finally, the balance sheets show the value of the stock of assets and liabilities of institutions and sectors at the beginning and end of the accounting period. The balance sheet completes the sequence of accounts, showing the final result of the entries in the production, distribution, and use of income, and accumulation accounts. These balance sheets are the building blocks of the BSA.

The data requirements of the BSA depend on its specification of sectors and financial instruments, as well as on the vulnerabilities being analyzed. The analyst should try to specify a framework based on the important risks or mismatches to be analyzed and on the available data for a country. The BSA can be applied without having a full set of data for all sectors and could be pursued to the extent that data are available and timely for useful empirical and policy analysis. To the extent possible, data used in the BSA should be produced following internationally accepted methodologies based on the 1993 SNA to minimize inconsistencies.

The availability of data for applying the BSA, whose gaps in the past hindered the assessment of vulnerabilities for macroeconomic policymaking, has improved.3 Efforts to incorporate the balance sheet approach into the IMF’s work have been supported by recent statistical and transparency initiatives. Requirements for the special data dissemination standard (SDDS) have improved the dissemination of data and metadata on public and external debt, international reserves and foreign currency liquidity, international investment positions, and analytical accounts of the banking sector. This, in turn, has led to improvements in methodologies and data availability, including the following:

In addition, some of the key results of the balance sheet analysis of Brazil are available at http://www.imf.org/external/np/pdr/bal/2004/eng/070104.htm.

While the paper by Allen and others (2002) marked the launch of a systematic application of the BSA, development of crisis models based on analysis of sectoral balance sheets dates at least to the Mexican crisis of 1994—95. This included work at the IMF such as Bussiere and Mulder (1999) and Johnston, Chai, and Schumacher (2000).

The latest review of data provision to the IMF for surveillance purposes indicated that balance sheet analysis had been generally hampered by lack of availability of currency and maturity breakdowns, particularly on public debt and assets and liabilities of the nonfinancial private sector.

Interrelationships of the Balance Sheet and Accumulation Accounts 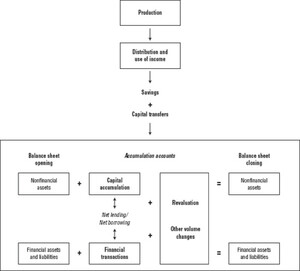