While the monetary tightening cycle appears to be nearing its peak in most Asian economies, the outlook for inflation remains uncertain, and monetary authorities will need to remain attuned to the emergence of stronger inflationary pressures. A further rise in global perception of risk could also require additional monetary tightening in countries where capital flows remain volatile. On the fiscal front, performance has generally remained on track, and risks to the outlook appear low. However, difficult longer-term fiscal challenges remain in many countries.9

While the monetary tightening cycle appears to be nearing its peak in most Asian economies, the outlook for inflation remains uncertain, and monetary authorities will need to remain attuned to the emergence of stronger inflationary pressures. A further rise in global perception of risk could also require additional monetary tightening in countries where capital flows remain volatile. On the fiscal front, performance has generally remained on track, and risks to the outlook appear low. However, difficult longer-term fiscal challenges remain in many countries.9

The principal factors influencing monetary policy in the region are broadly as outlined in the May 2006 REO, although relative risks have changed somewhat.

Most regional monetary authorities have remained proactive in addressing inflationary pressures. Although their rate increases have on the whole continued to lag those of the Fed (in some cases by quite a lot), they have in general exceeded the increase in inflation. As a result, real policy rates in Asia (based on contemporaneous core inflation) have risen to about 2¼ percent in the NIEs, and roughly 2 percent in the ASEAN-4. In recent months, however, real policy rates have eased somewhat. By comparison, the real policy rate in the United States had reached about 2½ percent at midyear.

Abstracting from these broad trends, there has been some variation in monetary policy across the region since the May 2006 REO. Most countries have raised policy rates further (by ¼ to ½ percentage point), to keep inflationary expectations in check. Indonesia, which has faced the highest inflation in the region, has been an exception to this general trend, lowering its policy rate by 150 basis points (from a peak of 12¾ percent in May) as price pressures have eased. And in the Philippines, the policy rate has remained on hold (at 7½ percent) since late 2004, reflecting a gradual moderation of inflation and positive external developments. In China, where inflation has remained low, the primary policy concern has been rapid credit and investment growth in certain sectors, and the risks this may pose to banking sector health.11 To address this concern, monetary policy has been tightened (via interest rate and reserve requirement increases), and administrative controls have been adopted (including sector-specific investment bans and restrictions on lending to excess capacity sectors).

In Japan, with inflation better established, monetary policy has normalized. Following the end of quantitative easing in March 2006, the Bank of Japan (BoJ) increased its overnight policy rate to ¼ percent on July 14. The move brought an end to almost five years of ZIRP—the unprecedented policy of effectively zero short-term interest rates aimed at reversing deflation and reviving the economy. The beginning of a tightening cycle was well anticipated by markets, with the modest removal of accommodation broadly viewed as an appropriate step toward a more neutral monetary stance. BoJ statements have helped reassure markets that, going forward, interest rates will be adjusted gradually.

In most of Emerging Asia, exchange rate appreciation had, until recently, contributed (in some cases significantly) to tighter monetary conditions, thus reducing the need for interest rate hikes. While regional exchange rates depreciated during the mid-year global financial market turbulence, most have recovered at least partially since then. Looking ahead, financial markets expect most Asian currencies to appreciate further. In the case of China and Malaysia, various indicators—including persistent and large current account surpluses—suggest that further appreciation is warranted. In other emerging Asian economies, appreciation pressures are likely to be weaker, reflecting generally narrowing current account surpluses. However, financial markets suggest that any renminbi appreciation is likely to be followed by that of other regional currencies, given the strong trade linkages in the region (Chapter II).

In some Asian countries, greater exchange rate flexibility is important for addressing the significant pressures on liquidity stemming from large foreign exchange inflows. Asian official foreign exchange reserves surged by $220 billion in the first half of 2006, reaching $2.9 trillion.12 In China—which accounts for one third of Asian reserves—strong inflows primarily reflect a burgeoning trade surplus. In the rest of emerging Asia, while current account balances have generally been narrowing, capital inflows have been buoyant, despite a temporary reversal in May and June.13 In these countries, the strong reserve accumulation this year marks a turn-around from late 2005. While part of the overall increase in Asia’s official reserves can be attributed to valuation gains on non-U.S. dollar holdings, the majority reflects intervention by monetary authorities.14

For most Asian economies, the central outlook is for the monetary tightening cycle to end this year. Headline inflation is generally expected to remain modest or decline in 2007—especially in countries where base effects have played a large role in the increase (e.g., Indonesia and the Philippines)—reflecting well-anchored inflationary expectations. Against this backdrop, some monetary authorities may even be in a position to begin easing (with Indonesia expected to ease further). And in Japan, with inflation unlikely to rise quickly (as growth appears to be moderating), monetary policy is expected to remain accommodative.

China and India present exceptions to this central outlook. In China, although there are signs that credit and investment growth may be moderating, both remain robust, and more monetary policy tightening is likely to be needed. Given concerns that such tightening could attract additional capital inflows (and hence expand liquidity), allowing more rapid appreciation of the renminbi, combined with an intensification of open market operations, is warranted. In India, although core inflation remains low, there are considerable price pressures in the pipeline, emanating principally from rapid credit growth (running at about 30 percent per annum), and possibly also from rising wage pressures.15 In addition, the decline in the yield differential with the United States (which has fallen by 2¾ percentage points since May 2005) may depress capital inflows, which play a significant role in financing India’s current account deficit.16 Further monetary tightening is therefore likely to be needed.

This central policy outlook could face a number of challenges.

Fiscal consolidation is set to continue in most Asian economies in 2006, as anticipated in the May 2006 REO. In the Philippines, higher revenue following the VAT reform, combined with expenditure constraints related to failure to pass the 2006 budget, is forecast to lower the deficit for the second year in a row. The deficit is also forecast to fall in Malaysia (due to buoyant oil-related revenues) and in Thailand (as public investment projects are postponed). In India, where the fiscal deficit has been considerably higher than in the rest of emerging Asia, consolidation is expected to be fairly modest this year, though somewhat larger in 2007. Deficit reduction is also expected in Japan, where public debt remains high and population aging will heighten already strong spending pressures. In contrast to this consolidating trend, Indonesia’s fiscal deficit is expected to widen this year, as fiscal policy aims to boost flagging domestic demand.

The fiscal stance across Asia is broadly neutral this year, which appears warranted in most countries given that growth is at or near potential. In some, however, significant off-budget oil subsidies entail a more expansionary fiscal policy than the headline deficit numbers would suggest. This could cause some tension with monetary policy where inflationary pressures require tightening (e.g., India).

Risks to the near-term fiscal outlook appear relatively minor at this stage, and relate primarily to expenditure.

Over the longer term, significant challenges remain on the fiscal front, primarily related to much-needed upgrades to infrastructure and costs related to aging societies. As discussed in the May 2006 REO, the infrastructure needs of emerging Asia are significant, and will require a considerable step-up in public investment in the coming years. In addition, the NIEs and industrial Asia are likely to face significant costs over the medium to long term as old-age dependency ratios rise. To the extent that regional economies are not making the most of the current favorable economic conditions to accelerate fiscal consolidation, an important opportunity to address these medium- to longer-term fiscal challenges is being missed.

(Since the rate tightening cycle began in each country, in percentage points)

(One year ahead, in percent) 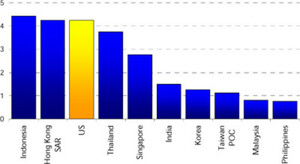 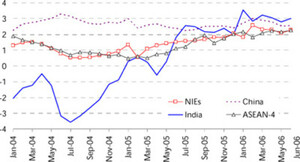 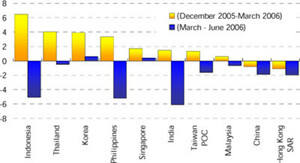 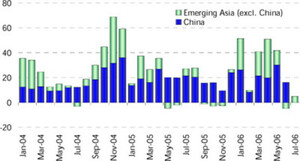 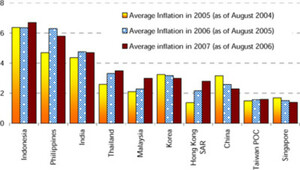 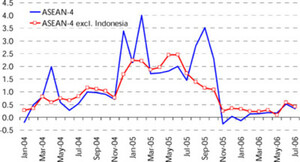 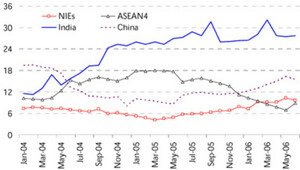