The world economy has been expanding strongly, with widespread, healthy growth in both employment and labor productivity. But unemployment remains a problem in many countries. Globally, almost half the unemployed people are young (ages 15–24), although they make up only 25 percent of the working-age population, according to the International Labor Organization (ILO).

The world economy has been expanding strongly, with widespread, healthy growth in both employment and labor productivity. But unemployment remains a problem in many countries. Globally, almost half the unemployed people are young (ages 15–24), although they make up only 25 percent of the working-age population, according to the International Labor Organization (ILO).

In 2005, the world’s labor force ages 15 and older—comprising those in work and people seeking jobs—topped 3 billion, up almost 17 percent from 1995. Of these, 2.85 billion had jobs. The ratio of global employment to population stood at 61.4 percent, down 1.4 percentage points from a decade earlier, with most of this decline taking place in the late 1990s.

Although unemployment fell markedly in developed economies in 2005 to an average of 6.7 percent from 7.1 percent a year earlier, it continued to rise in the former Soviet bloc countries. The Middle East and North Africa have the highest regional rate (13.2 percent), while East Asia has the lowest (3.8 percent).

Almost half of the world’s unemployed are under 25 and young people are more than three times as likely as adults to be jobless. Within their age group, the share of employed young people fell to 46.7 percent in 2005 from 51.7 percent in 1995. Youth participation in the labor force also fell, partly because of the increasing proportion in education.

Global labor productivity (measured as output per worker) rose by 2.6 percent in 2005, compared with 3.0 percent in 2004. Since 1995, it has grown at an annual average rate of 2.0 percent, while GDP has risen by an average of 3.8 percent a year. The least progress is being made in sub-Saharan Africa, the Middle East and North Africa, and Latin America and the Caribbean.

Women make up some 40 percent of the world’s workforce. While the gap between the proportion of women employed versus men has narrowed, it still remains wide: some 52 percent of adult women versus 81 percent of adult males. And participation rates (the proportion either working or looking for a job as a percentage of working-age women) are declining, after increasing in the 1980s and early 1990s. Male participation rates have also fallen.

The proportion of workers and their families who are living on $2 or less a day per family member has fallen to 48 percent of the global employed workforce from 55 percent in 1995. But absolute numbers increased to 1.37 billion in 2005 from 1.35 billion 10 years earlier. Trends in extreme working poverty (those living on less than $1 a day) varied by region, with Asia showing strong falls, but with absolute numbers in sub-Saharan Africa and Latin America and the Caribbean rising.

Prepared by Dorothea Schmidt, an Economist at the International Labor Organization, www.ilo.org.

The world’s workforce is rising steadily …

… but unemployment is also increasing.

… and global youth unemployment is far too high.

Jobs are shifting to services sector …

(sectoral shares as a percent of total employment)

… and productivity is rising.

(output per worker in dollars, at purchasring power parity)

But the gender gap remains wide …

… and poverty among workers remains a huge problem.

(working poor living on less than $1 a day, number and share in total employment, by region, millions) 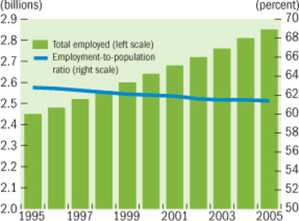 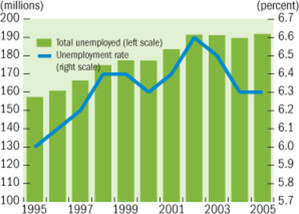 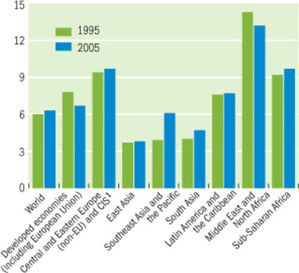 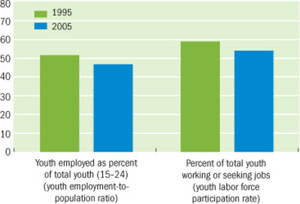 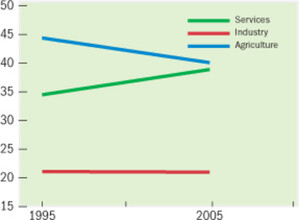 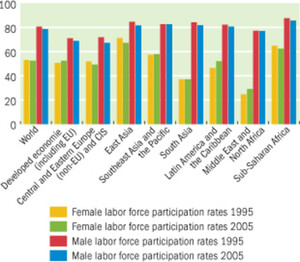 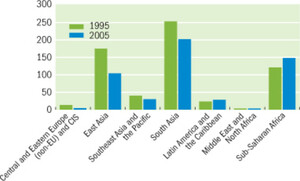