How has the increased participation of many developing countries in international trade affected their economic growth rates, and what implications has this had for the international distribution of income and the incidence of poverty?

How has the increased participation of many developing countries in international trade affected their economic growth rates, and what implications has this had for the international distribution of income and the incidence of poverty?

The World has become a much smaller place over the past two decades. International trade has grown twice as fast as worldwide income during this period. Spurred by advances in information technology, a growing share of this trade is in services rather than merchandise, especially among rich countries. International direct and portfolio equity investment has also surged tremendously during the same period.

What are the implications of international integration—or globalization—for inequality and poverty? In recent research (Dollar and Kraay, 2001b), we have explored this question by studying the experiences of a group of developing countries that have significantly opened up to international trade during the past two decades. We provide evidence that, contrary to popular beliefs, increased trade has strongly encouraged growth and poverty reduction and has contributed to narrowing the gaps between rich and poor worldwide.

We illustrate our main points by focusing on the experiences of a small group of developing countries that have seen large increases in trade over the past 20 years. We refer to these countries (see table) as the “post-1980 globalizers.” We first exclude the member countries of the Organization for Economic Cooperation and Development (OECD), as well as the East Asian tigers (Hong Kong SAR, the Republic of Korea, Singapore, and Taiwan Province of China), and Chile, whose experiences with trade liberalization in the 1960s and 1970s are well known. We then ranked the rest of the developing world according to their increases in trade as shares of their GDPs over the past 20 years and selected the top one-third as our globalizers. As a group, these countries saw their trade as a share of GDP double to 33 percent, while trade relative to GDP actually declined among the nonglobalizers. The 24 globalizers contain many well-known trade liberalizers, including Argentina, China, Hungary, India, Malaysia, Mexico, the Philippines, and Thailand. Because China, India, and several other large countries are included, more than half of the developing world’s people live in this group. But it also includes some anomalies, such as Haiti and Rwanda. These serve to remind us that changes in trade reflect many factors other than trade policy, as we discuss below. We have used the experiences of these globalizers to make four points.

• First, many existing studies measure trade openness simply as the share of a country’s trade in its GDP. However, differences in countries’ trade shares reflect their geographic characteristics (for example, countries that are small and close to major markets tend to trade more than countries that are large or remote) to a much greater extent than their trade policy decisions. As a result, it is difficult to draw conclusions from many of these studies, which rely on cross-country evidence, about the effects of trade liberalization on growth. Worse, the observed correlation between trade and growth may simply reflect geographical determinants of growth. Efforts to use more direct measures of trade policy (such as average tariffs or nontariff barriers) have shown mixed results, although this may simply reflect the difficulties in systematically measuring these indicators of trade policy.

• Second, it is often difficult to disentangle the effects of trade liberalization from other domestic policy choices—after all, many countries that liberalize trade often simultaneously embark on other domestic reforms that can also have sizable growth benefits. Without adequately controlling for other policies, one risks confounding the effects of trade liberalization with other growth-enhancing policies.

• Third, it is difficult to identify the direction of causation in many existing studies—does trade cause faster growth or do economies that grow quickly also trade more? While conclusively identifying causal effects of trade on growth is likely to remain elusive for some time, it is possible to improve on many existing studies that ignore the issue entirely.

In our recent research, we have attempted to address some of these concerns. In order to eliminate the geographically determined component of trade, we have estimated the effect of trade on growth using decade-over-decade changes in countries’ trade as shares of their GDPs. This, by definition, removes the spurious effect of geography on trade and growth (because countries’ geographic characteristics do not change over time) and, in our view, gives a cleaner (although still far from perfect) measure of the policy-induced component of trade. To control for the effects of other contemporaneous changes in policies and institutions that may affect growth, we include measures of the stability of monetary policy, financial development, and political instability. Finally, we use an econometric technique for which the results are less likely to reflect reverse causation running from growth to trade. The evidence that emerges from this analysis is consistent with the experiences of the post-1980 globalizers. We found a statistically significant and economically meaningful effect of trade on growth: an increase in trade as a share of GDP of 20 percentage points increases growth by between 0.5 and 1 percentage point a year.

Inequality has not increased systematically

Although the growth benefits of trade are increasingly recognized, many analysts are legitimately concerned about the effects of trade liberalization on income distribution. In our research, however, we document that the growth benefits of increased trade are, on average, widely shared—we have found no evidence of a systematic tendency for inequality to increase when international trade increases (see Dollar and Kraay, 2001a). Chart 2 illustrates this point by plotting changes in a measure of inequality (the Gini coefficient, which ranges from 0 to 100, with a higher coefficient indicating greater inequality) on the vertical axis, and changes in trade volumes on the horizontal axis. This figure reflects the experiences of more than 100 developed and developing countries, with changes in trade and changes in inequality measured over periods of at least five years in order to capture the medium- to long-run relationship between trade and inequality.

Chart 2 exhibits a striking absence of any simple correlation between changes in trade and changes in inequality. In our other research, we have examined the validity of this simple result in several dimensions. We considered a wide variety of measures of openness, including direct measures of trade policy and international capital flows, as well as trade volumes themselves. We also searched for nonlinearities in this relationship, allowing for the possibility that the effects of trade on inequality are different in rich and poor countries and in countries with different factor endowments. The conclusion that emerges from this—that there is little evidence of a systematic tendency for inequality to either increase or decrease with increased trade—is consistent with the simple evidence presented in Chart 2.

This evidence is also consistent with the experiences of the post-1980 globalizers. While several of our globalizers have seen increases in inequality (most notably China, where the Gini coefficient increased from around 32 in the early 1980s to 40 in the mid-1990s), several others have seen decreases (for example, Malaysia, where the Gini coefficient fell from 51 to 48 during the same period). And, in many countries, large shifts in income distribution can arguably be linked to influences far removed from international trade. In China, for example, domestic liberalization, restrictions on internal migration, and agricultural policies have played a much larger role than increases in international trade.

The combination of increases in growth and little systematic change in inequality in the globalizers has considerably boosted efforts to reduce poverty. In Malaysia, for example, the average income of the poorest fifth of the population grew at a robust 5.4 percent annually. Even in China, where inequality did increase sharply and the income growth rate of the poorest fifth lagged behind average income growth, incomes of the poorest fifth still grew at 3.8 percent annually. The fraction of the population of these countries living below the $1 a day poverty threshold fell sharply between the 1980s and the 1990s: from 43 percent to 36 percent in Bangladesh, from 20 percent to 15 percent in China, and from 13 percent to 10 percent in Costa Rica, to name a few.

Gap between rich and poor has narrowed

The top panel of Chart 3 provides a rough estimate of trends in worldwide inequality over the past 40 years, using the mean log deviation measure of income inequality (the mean log deviation can be interpreted as the percentage difference between the income of a randomly selected “typical” individual and worldwide average income). To construct this figure, we used cross-country differences in real per capita GDP adjusted for differences in purchasing power for more than 100 countries as a measure of income differences between countries. To measure inequality within countries, we used the nearest available Gini coefficient for each five-year period for each country.

Worldwide interpersonal inequality has been quite stable over the past forty years, showing at most a weak downward trend that is unlikely to be statistically significant, given the immense difficulties of measurement inherent in such calculations. More interesting for our purposes is the effect of the rapid growth of the post-1980 globalizers on this inequality measure. To illustrate this, the top panel of Chart 3 first divides worldwide inequality into inequality between countries and inequality within countries. Consistent with the findings of other studies, most worldwide interpersonal income inequality can be attributed to the large differences in average incomes between countries, rather than to inequities in the distribution of income within countries. And since many of the globalizers were initially poor, their rapid growth over the past 20 years has contributed to reducing income inequality between countries. This can be seen in the bottom panel of Chart 3, which takes the between-country component of inequality and further subdivides it into the globalizers, the rich countries, and the rest of the world. Much of the decline in the between-country component of inequality can be seen to be due to the rapid growth of the globalizers, most notably China and India, whose economies’ vast size has given them substantial weight in these calculations.

The integration of the world economy over the past twenty years has been dramatic. The experiences of the post-1980 globalizers show that the process can have great benefits, contributing to rising incomes and falling poverty and enabling some of the poorest countries in the world to catch up with richer countries. The real losers from globalization are those developing countries that have not been able to seize the opportunities to participate in this process.

Changes in trade and income inequality

The globalizers and worldwide inequality 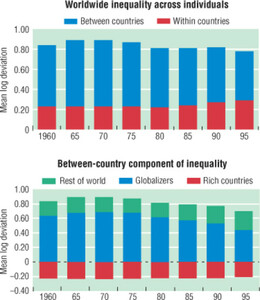