Cross-Border asset accumulation has risen dramatically over the past decade. After a period of relatively narrow fluctuations during 1980–95, global cross-border flows tripled during the past decade to $6.4 trillion, reaching about 14.5 percent of world GDP by 2005 (see Chart 1). Much of the movement is due to a number of trends. Investment is increasingly diversified across borders, global capital markets are becoming more integrated as a result of liberalization and advances in technology, and the current economic environment offers many opportunities for growth around the world.

The confluence of these factors, combined with the rapid growth of assets under management outpacing the availability of domestic assets, has contributed to heightened cross-border flows. Low-risk premiums on assets have emboldened investors to venture down the credit curve in search of better yields. These developments have also been accompanied by increased leverage and risk taking.

Analyzing the changes in the international investor base and their investment allocation behavior is fundamental to understanding the buildup of strengths and weaknesses in international financial markets. Decisions that key investors make about where to allocate their assets not only affect the prices of financial assets, but also have wide-ranging implications for economic performance and welfare in various countries. The size of these cross-border flows and the rapid pace of innovation have given rise to concerns for financial stability, as countries remember that past booms in financial investment were followed by crises. Although it is admittedly difficult to disentangle the complex links and networks of investors around the world, this article attempts to illustrate the key underlying changes in the global investor base and assess the implications for financial stability.

Where’s the money coming from?

Mature market countries remain the dominant supplier of gross capital flows, driven by intra-European cross-border flows, followed by the United States and Japan. European Union (EU) integration has facilitated financial regionalization within the continent, boosting Europe’s share in global cross-border flows to about 70 percent in 2005 from 50 percent in 1996. Indeed, because euro member countries disproportionately invest in one another relative to other country pairs, there is considerable empirical support for euro area bias in bond portfolios (Lane, 2006). Developed Asia’s position as a major supplier of gross capital flows has declined somewhat, with Japan, though still sizable, losing ground over the past decade. However, the contribution to cross-border flows from Asia—the emerging economies, newly industrialized economies (Hong Kong SAR, Korea, Singapore, and Taiwan Province of China), and the oil-producing countries—has risen significantly since 2000.

An examination of trends in net capital flows reveals a notable shift in the composition of the global balance sheet and casts a spotlight on global payments imbalances. Most notably, emerging market countries, as a group, have become net exporters of capital and an important investor class in mature markets over the past five years (see Chart 2), with their outflows mirroring the U.S. external financing gap. However, this movement of capital from emerging markets to mature markets is channeled primarily through Asian central bank reserves and sovereign wealth funds, mainly of oil exporters (such as those managed by the Abu Dhabi Investment Authority, Kuwait Investment Authority, and others). But private capital is also flowing from mature markets to emerging markets as institutional investors, banks, and corporates increasingly allocate their growing financial assets to cross-border investment to diversify and enhance risk-adjusted returns.

A surge in flows of institutional money has buoyed global capital flows over the past decade. The most significant growth has been in portfolio flows, mainly in debt, and in cross-border banking. These inflows, combined with the appreciation of asset prices and facilitated by financial innovations in the derivatives markets, have led to an unprecedented growth and deepening of financial markets. The size of the world’s equity and bond markets is now double the level of world GDP, with global stock market capitalization reaching $38 trillion in 2005, compared with $45 trillion for bond markets (see Chart 3).

“In emerging markets, central banks and sovereign wealth funds have become key players in the cross-border allocation of capital, with U.S. financial markets a major focus.”

Aside from the institutional money and banking finance, foreign direct investment (FDI) originating from mature market countries has also partially recovered since the bursting of the dot-com bubble. FDI inflows to emerging markets have been increasing but remain largely concentrated, with China accounting for about 50 percent of emerging market flows since 2002. Among the emerging markets, Asia-Pacific and emerging Europe are the leading recipients of FDI, while inflows to Latin America, dominated by Brazil, have fallen since 2000.

How the investor base is changing

The rapid growth in cross-border flows has been accompanied by changes in the investor base that have been fueled by three key trends: the phenomenal growth in assets under management of institutional investors, the rapid growth of hedge funds, and the rise of emerging market central banks and sovereign wealth funds as key players.

There has been a sharp increase in assets under management of traditional mature market institutional investors (pension funds, insurance companies, and mutual funds). Assets of these investors grew from about $21 trillion in 1995 to about $53 trillion in 2005, with the United States accounting for about half and Europe for more than one-fourth (see Chart 4). Pension funds in the United States represent a sizable portion of this asset base, while—except for Ireland, the Netherlands, and the United Kingdom—the share held by Europe is relatively small. Mutual funds and insurance companies, however, constitute a major share of institutional assets both in the United States and in Europe.

Another key trend has been the rapid growth of hedge funds. The number of hedge funds (excluding subsidiary funds) multiplied from 530 in 1990 to more than 6,700 by 2005. Inflows to hedge funds have been very strong since 2002, driven by a widening of the investor base to bring in institutional investors alongside high-net-worth individuals. Assets managed by the hedge fund industry, though smaller than those of other institutional investors, grew from $30 billion in 1990 to more than $1.4 trillion in 2005. Most of these funds are managed from the United States and the United Kingdom, which accounts for the bulk of Europe’s share (see Chart 5). For example, U.K. pension funds significantly increased their allocation to hedge funds in 2004 (UBS, 2005).

In emerging markets, central banks and sovereign wealth funds have become key players in the cross-border allocation of capital, with U.S. financial markets a major focus. The volume of U.S. treasury securities held by foreigners has more than tripled over the past decade, and the acquisition by foreign official institutions has contributed significantly to this buildup. China recorded the largest gain, increasing its holding by 50 percent over the past few years to become the third-largest investor. By end-2005, foreign official institutions were estimated to be holding more than 50 percent of all foreign-held U.S. long-term securities.

The increase in assets managed by mature market institutional investors has been accompanied by an increase in cross-border asset allocation and a trend decline in home bias. The home bias emerges from the observation that weights in international portfolios tend to be biased toward the home country (French and Poterba, 1991; Aurélio, 2006).

The decline in home bias has been driven by structural as well as cyclical factors. Diversification has been an overarching motivation for most institutional investors. Regulatory and accounting changes for pension funds have also contributed to the shifts in investors’ asset allocation decisions. In particular, because of the increase in expected liabilities of pension funds, such investors have sought to diversify investment strategies that not only match more closely their liabilities but also achieve the highest risk-adjusted return.

Although cross-border capital flows and the change in investor base have significant implications for financial stability, there are both pluses and minuses. On the one hand, a more globally diverse investor base, representing different types of institutions and different countries, is less likely to suffer simultaneous, symmetric, and significant shocks and therefore may be better able to manage risks and absorb shocks during a period of stress. On the other hand, a period of low volatility and low credit spreads may well be masking new exposures and new risks, such as increased activity in alternative assets that are relatively more illiquid, raising financial stability concerns. Such concerns are compounded by increased leverage of market participants and how the unwinding of such positions can be executed under duress.

Investor perception of the maturity of the emerging market asset class has been underpinned by improved credit fundamentals, more flexible exchange rate regimes, higher reserve coverage, a structural boost from the convergence of emerging European countries to EU levels, and transparency of information originating from emerging market countries (Byun and Oswald, 2006). These changes have resulted in a higher strategic inflow to this asset class. Indeed, assets under management of emerging market funds benchmarked to emerging market bond indices grew from $27 billion in late 2000 to about $230 billion as of mid-2006. These strategic investors tend to buy and hold and usually have a lower, or no leverage because they aim largely to match the duration of their longer-term liabilities.

Asset price volatilities have seen a long-term decline across asset classes for bonds, equities, and foreign exchange. Both realized volatilities and implied volatilities have moderated considerably in a range of assets in mature markets. Emerging market assets, such as sovereign external debt, have also followed this trend. Although such a phenomenon could, in the words of U.S. Federal Reserve Chairman Ben Bernanke, be attributed to “the great moderation,” its durability remains to be tested in a less benign environment.

Ceyla Pazarbaşloğlu is a Division Chief, Mangal Goswami is an Economist, and Jack Ree is a Senior Economist in the IMF’s Monetary and Capital Markets Department.

This article is based largely on the IMF’s Global Financial Stability Report (April 2007), which includes a chapter analyzing the growth in international capital flows, the widening of the investor base, and the implications for financial stability.

Global bond and equity markets have witnessed unprecedented growth in the past 15 years.

Hedge funds are becoming more popular with a wider set of investors. 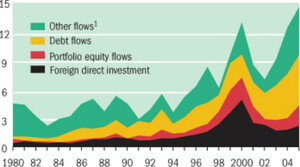 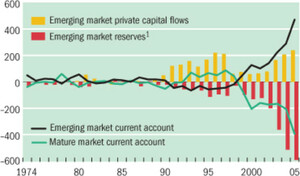 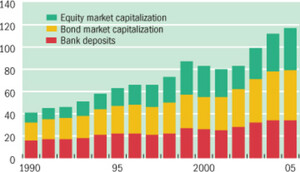 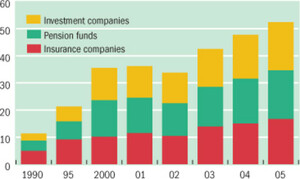 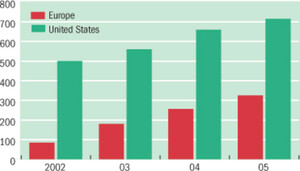