What new data tell us about the external wealth of nations

What new data tell us about the external wealth of nations

External imbalances and financial globalization have been at the top of the international policy agenda for the past few years. Indeed, such influential observers as former U.S. Federal Reserve Chairman Alan Greenspan and his successor Ben Bernanke have argued that the rapid integration of the international financial system during the past decade has played an important role in enabling these imbalances to persist and be easily financed. In addition, emerging market economies, traditionally recipients of foreign capital, have become a major source of net foreign capital outflows and, most notably, have been collectively important in financing the large and growing U.S. current account deficit.

So what is there to worry about if financial globalization means that the current configuration of imbalances represents a new but sustainable regime for the world economy? Is the system unstable, or are analysts unduly concerned about global imbalances? To answer these questions requires some spade work. We need to decide how to measure international financial integration, track down which countries are net creditors and which are net debtors, and assess the magnitudes of the accumulated external holdings.

As it turns out, unearthing this information is not that straightforward. For example, despite notable progress in recent years, there are very significant gaps in the availability of data on holdings of external assets and liabilities (the so-called International Investment Position in a country’s balance of payments), all the more so if one looks beyond the past few years. This means that, for a large set of countries, we know neither their net external wealth nor the size and composition of their external portfolios—hindering a truly global analysis.

We have sought to remedy this problem by constructing a data set comprising estimates of external assets and liabilities for more than 140 countries for 1970–2004. Although measurement error is likely to be substantial for a number of countries for which there is limited data availability on cross-country capital flows and holdings, this extensive coverage provides a useful global perspective on the cross-country distribution of external holdings and its evolution, and enables analysis of the sustainability of global imbalances from a policy perspective.

Why is information on net external positions and the magnitude and composition of external portfolios important? Clearly, the assessment of external sustainability requires knowledge of a country’s financial exposure to the rest of the world, while information on the size and composition of international portfolios is key to understanding the interdependencies among countries, as well as their respective financial vulnerabilities.

For example, an emerging market country facing a sudden slowdown in capital inflows will be more vulnerable to a crisis if it has large debt liabilities denominated in foreign currency—because domestic currency servicing costs rise with a depreciation—than if it has relied more heavily on foreign direct investment (FDI), when returns are linked to the performance of the domestic economy.

Similarly, the internationalization of portfolios means that shocks in one country are immediately transmitted to foreign holders of financial instruments issued by that country. While such financial interdependencies are a manifestation of a desirable increase in international risk sharing, they also imply that international events will have stronger domestic repercussions and that large shocks are more likely to have systemic implications, requiring enhanced monitoring by regulators and other policymakers.

For our research, described in more detail in Lane and Milesi-Ferretti (2006), we divided data on assets and liabilities into broad categories: portfolio equity investment, FDI, foreign exchange reserves, and debt (which includes portfolio debt securities as well as other instruments, such as loans, deposits, and trade credits). The net external position, given by the difference between total external assets and total external liabilities, measures the net creditor or debtor position of a country vis-à-vis the rest of the world. From this database we can deduce a number of broad trends or stylized facts.

First, international financial integration has increased markedly, particularly among advanced economies. While the trend toward increased international asset trade has been visible since the early 1970s, it has accelerated since the mid-1990s (see Chart 1). In advanced economies, the increase in cross-border asset holdings has been strong for both debt and equity instruments (the latter including FDI and portfolio equity). In emerging markets and developing economies, there has also been a sharp increase in cross-border equity holdings, but the overall stock of debt instruments (assets—including official reserves—and liabilities) has been relatively stable since the mid-1980s. Clearly, factors such as the increase in trade linkages, the reduction in capital controls, domestic financial deepening, advances in telecommunications, and the increased availability of information are important in driving the acceleration of international financial integration.

Second, global imbalances have widened sharply during the past few years, with emerging Asia and the oil exporters increasingly becoming creditors and the United States seeing a worsening in its net external position (see Chart 2). However, despite the massive U.S. current account deficit, the U.S. external position during the past three years has been surprisingly stable, a puzzle we will address below. Which are the largest creditors and debtors, relative to their GDP levels? Although richer countries tend to be creditors, the correlation is less than watertight (see Chart 3). Indeed, in addition to a country’s level of development, several other factors—including demographics, the size of public debt, and natural resources—can influence its external position.

Consider the United States. On average, U.S. investors have earned higher returns on their assets than on their liabilities, especially during 2002–04 (see Chart 4). These rates of return include investment income earnings—such as dividends or interest payments on debt securities—which are recorded in the current account, and capital gains and losses arising from fluctuations in the value of assets and liabilities. These valuation effects, triggered by changes in stock prices, interest rates, or exchange rates, are not included in the current account. They can, therefore, generate changes in the net external position even if a country’s net borrowing from abroad is zero.

During 2002–04, however, movements in exchange rates and asset prices also played a key role in explaining the return differential. While U.S. liabilities were almost entirely denominated in U.S. dollars, a sizable proportion of U.S. assets (FDI, portfolio equity, a fraction of portfolio debt, and foreign exchange reserves) was denominated in foreign currency, primarily held in Europe and other advanced economies. The substantial weakening of the dollar vis-à-vis the currencies of those countries during 2002–04 raised the returns on U.S. foreign assets through the valuation channel, a development that has been compounded by the movements in relative stock prices, which have increased more sharply overseas than in the United States. (However, there is also evidence that, on average, U.S. investors make superior returns within asset categories—particularly for FDI.)

We can now understand why the U.S. external position did not deteriorate substantially during 2002–04, despite massive net external borrowing. From a “dollar area” perspective, movements in exchange rates and asset prices raised the value of U.S. holdings of assets overseas, while, from a “European” viewpoint, the weakening of the dollar imposed heavy capital losses on holders of dollar-denominated debt instruments.

Naturally, the reader may think that the recovery in the dollar’s value during 2005 means that the United States will suffer a currency-related capital loss. Well, not so fast! On the basis of the admittedly incomplete data available so far, that loss was more than compensated for by stronger equity market performance in the rest of the world (including Europe, Japan, and emerging Asia) than in the United States—and so, 2005 goes down as the fourth year in a row of significant net external capital gains for the U.S. economy. In 2005, the Morgan Stanley Capital International Index of world stock markets (excluding the United States) rose by 12 percent in dollar terms, compared with a 4 percent rise in the S&P 500.

But how long can a large differential between returns on U.S. assets and U.S. liabilities be sustained, thereby allowing the United States to run large trade deficits without experiencing a major deterioration in its external position? Although some positive differential in returns may well persist and would play an increasingly important role as long as financial integration increases, logic would suggest that return differentials of the order of magnitude of those witnessed in the past three to four years cannot be sustained for a prolonged period of time—they would likely require persistent dollar depreciation, which would eventually be incorporated in inflation expectations and interest rate differentials. And higher interest rates together with a global decline in stock market values could reverse the return differential and lead to a substantial deterioration in the U.S. external position. Thus, a substantial correction in the U.S. trade deficit will eventually be necessary to correct external imbalances.

Opportunities and risks for emerging markets

It is well known that those same “valuation effects” that help the United States stabilize its external position have in the past wreaked havoc with the external balances of emerging market countries. Indeed, a surprise exchange rate depreciation has conflicting effects for a typical emerging market economy—although its trade balance will eventually improve, its net foreign asset position may deteriorate if it is a net debtor in terms of foreign currency instruments. This conflict between the trade and valuation channels helps explain why emerging market economies are concerned about exchange rate volatility and why it is so difficult to determine appropriate exchange rate policies, especially during times of crisis. It also highlights the importance of promoting local currency debt markets, increasing the role of FDI and portfolio equity inflows as a means of sharing risk more effectively, and using alternative financial instruments such as GDP-indexed bonds, whose returns are tied to domestic economic performance.

Philip R. Lane is Professor of International Macroeconomics and Director of the Institute for International Integration Studies at Trinity College Dublin. Gian Maria Milesi-Ferretti is a Division Chief in the IMF’s Research Department.

The United States saw a sharp deterioration in its net foreign asset position during 1999–2001, but the position has since stabilized despite record current account deficits.

For richer or poorer

Richer countries are more likely to be creditors than poorer countries.

U.S. investors have earned more from their external assets than foreigners have from investments in the United States. 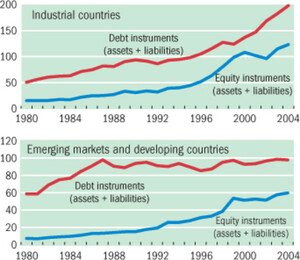 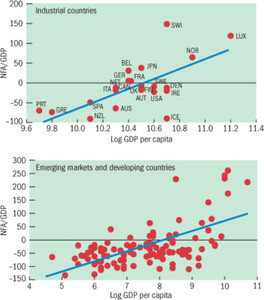 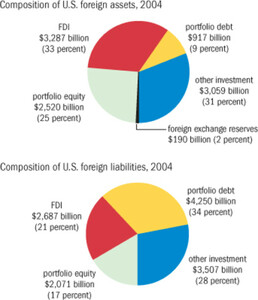