Reduction in cost of ocean freight transport between 1920 and 1990

Price of equivalent computer in 2000

Globalization is characterized by increases in flows of trade, capital, and information, as well as mobility of individuals, across borders. It is not a new phenomenon—globalization has progressed throughout the course of recorded history, although not in a steady or linear fashion.

Increased international trade and capital flows have been a major source of the unprecedented economic growth and rise in living standards globally in the postwar period. Evidence shows that countries that have opened up to the rest of the world have done better than those that have not (see chart). In fact, there are no successful cases of fast-growing countries that followed inward-looking policies. Even so, not all open economies have prospered, nor have all citizens of countries that have globalized. Of course, other factors—including the full range of domestic economic and social policies—also shape countries’ economic growth and how the benefits of that growth are shared.

Has globalization helped the poor?

Not only does international economic integration promote economic growth, but also, on average, economic growth tends to increase incomes of the poor. In fact, without economic growth, there can be no sustained poverty reduction. Globalization has also facilitated the spread of technologies that have contributed to dramatic improvements in health, life expectancy, and literacy in poorer countries and communities.

• Over the past three to four decades, adult illiteracy rates have declined by 30 percentage points in China, Ghana, India, Korea, and Mexico.

Global inequality has two dimensions: inequality among and within countries.

• Within developing countries, inequality has increased even as income has grown for both rich and poor. However, it is wrong to link this increase in inequality solely to globalization, as many factors can affect inequality. Some of them are specific to the countries concerned (such as wars and natural disasters), while others are more general (such as technological change).

How should governments respond to problems caused by globalization?

How should governments respond to problems caused by globalization? 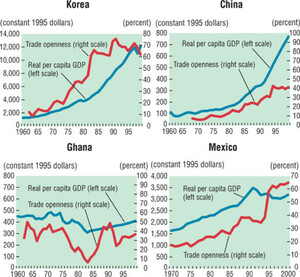