Macroeconomic outcomes in low-income countries have improved markedly in recent years. Reflecting improvements in policy implementation, increased official financial support, and a relatively benign international environment, economic growth in the poorest countries has increased from 2½ to 3 percent in the 1980s and early 1990s to some 4 percent since the mid-1990s. These higher growth rates have been associated with lower inflation rates, healthier public finances, and higher international reserves (Table 1.1). Although these growth outturns remain short of the rates required to achieve the Millennium Development Goals (MDGs), they nonetheless represent the best performance for low-income countries since the late 1970s.

Macroeconomic outcomes in low-income countries have improved markedly in recent years. Reflecting improvements in policy implementation, increased official financial support, and a relatively benign international environment, economic growth in the poorest countries has increased from 2½ to 3 percent in the 1980s and early 1990s to some 4 percent since the mid-1990s. These higher growth rates have been associated with lower inflation rates, healthier public finances, and higher international reserves (Table 1.1). Although these growth outturns remain short of the rates required to achieve the Millennium Development Goals (MDGs), they nonetheless represent the best performance for low-income countries since the late 1970s.

However, important questions remain regarding the appropriate focus of macroeconomic policies for the next generation of IMF-supported programs in low-income countries:

This paper considers possible adjustments in the design of IMF-supported programs, drawing on the experience of low-income countries that have successfully addressed the most apparent domestic macroeconomic imbalances. The paper, including the discussion of stylized facts and various empirical assessments, focuses on a group of 15 mature stabilizers that had achieved positive output growth at the start of their PRGF arrangements and in which inflation and the domestic government deficit had been brought under control (Box 1.1). An additional 5 or 6 other countries could have made this group, but the final sample was chosen with broad geographical representation in mind (Box 1.2) and limited to 15 to keep the analysis tractable. Importantly, the criteria used here do not include measures of external viability, which remains a serious concern in most of the countries in the sample.

Although the focus of this paper is on mature stabilizers, the paper also addresses some issues that are of relevance to other PRGF-supported programs. For example, both mature stabilizers and other countries with PRGF-supported programs face the challenge of increasing their capacity to absorb foreign aid and improving the efficiency of public spending. As such, some of the analysis is applicable to low-income countries more generally.

Section II presents the stylized facts of program design in the 15 mature stabilizers during 2000–03. Against this backdrop, Sections III and IV take up monetary and fiscal issues, respectively. Section V concludes.

In September 1999, the IMF established the PRGF to make the objectives of poverty reduction and growth more central to lending operations in its poorest member countries. PRGF-supported programs are framed around comprehensive, country-owned Poverty Reduction Strategy Papers (PRSPs) prepared by governments with the active participation of civil society and other development partners. As of September 2005, 78 low-income countries were eligible for PRGF assistance, of which 31 had a PRGF arrangement. Loans under the PRGF carry an annual interest rate of 0.5 percent and are repaid over a 10-year period.

Experience with the PRGF highlights a number of distinctive features:

PRGF-supported programs are designed to cover only areas within the primary responsibility of the IMF, unless a particular measure is judged to have a direct, critical macroeconomic impact. Areas typically covered by the IMF include advising on prudent macroeconomic policies and related structural reforms such as exchange rate and tax policy, fiscal management, budget execution, fiscal transparency, and tax and customs administration.

When appropriate, the IMF draws on World Bank expertise in designing PRGF-supported programs, and the staffs of the IMF and Bank cooperate closely on program conditionality.

Why the “Mature Stabilizer” Moniker?

There is no accepted definition of a mature stabilizer. Previous IMF documents have identified such a country as one where “political and economic institutions are in place and macroeconomic stability is reasonably well established.” The criteria developed in this paper are meant to capture those low-income countries that—after a period of protracted macroeconomic instability, manifested among other things in high levels of inflation (see the figure)—have achieved some degree of internal macroeconomic balance and a manageable fiscal position. Countries were selected on the basis of their performance on a number of macroeconomic criteria, including positive output growth, inflation less than 10 percent, and domestic financing of the budget deficit under 1 percent of GDP in the year before the start of the PRGF arrangement.1

Another label that has been used to refer to low-income countries with similar traits is “poststabilization” countries. Gupta, Verhoeven, and Tiongson (2002) and Adam and Bevan (2004) referred to similar countries as poststabilizers. The criteria used in this paper are more comprehensive. In Gupta, Verhoeven, and Tiongson (2002), poststabilization countries are defined as those with deficits under 2 percent of GDP, inflation less than 10 percent during the preprogram year and projected to remain under 10 percent during the two subsequent years, and positive growth during the preprogram year. Adam and Bevan (2004) define a successful stabilization (and by extension, a poststabilization country) as one in which inflation declines from “high levels” to rates under 15 percent for at least two years. The World Bank (2001) suggests that a primary surplus of 3 percent of GDP would qualify a country as being in a poststabilization state.

On the basis of the criteria, 15 countries that also had PRGF-supported programs during the 2000–03 period were selected, although a few more could have qualified. The exclusion of some countries was based on the expiration of PRGF eligibility (Macedonia FYR), the start of a qualifying PRGF program period only in 2003 (Armenia and Burkina Faso), political instability (Côte d’Ivoire), and the desirability of ensuring adequate geographical representation. The countries in the sample are Albania, Azerbaijan, Bangladesh, Benin, Ethiopia, Guyana, Honduras, the Kyrgyz Republic, Madagascar, Mongolia, Mozambique, Rwanda, Senegal, Tanzania, and Uganda. Data were drawn from IMF staff reports and the World Economic Outlook (WEO) database. Given fluctuations in macroeconomic and fiscal performance, most countries did not continuously meet all three conditions. For example, of the 51 annual IMF-supported programs in these 15 countries examined between 2000 and 2003, in only 29 cases did they meet all three conditions in the preprogram year.

1 This measure provides a proxy for the sustainability of domestic debt accumulation. As long as growth is positive, under most circumstances, such a low level of financing would result in no more than a moderate steady-state level of domestic debt as a share of GDP.
1

The implications of the recent Multilateral Debt Relief Initiative, in particular for the countries that have been part of the enhanced Heavily Indebted Poor Countries (HIPC) Initiative are not considered in this paper. 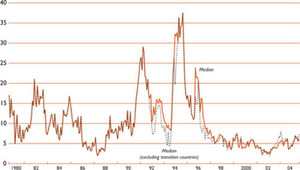