This report provides an updated assessment of movements in official financing to developing countries during 2000–02, using the most recent creditor/donor-based data.3 As recent developments in new aid flows including ODA have been reviewed elsewhere, based largely on debtor-reported data,4 this report focuses on recent developments in officially supported export credits and debt restructurings with Paris Club and other official bilateral creditors. It discusses the issue of trade finance in financial crises and a new approach by the Paris Club to deal with unsustainable debt in non-HIPC countries.

Total ODA remained little changed in U.S. dollar terms between 2000 and 2001, with multilateral institutions providing an increasing share of the ODA flows in 2001. However, preliminary data indicate that net ODA increased by 5 percent in 2002, compared with 2001, amounting to

57 billion (see Appendix I for more details). The ratio of ODA to gross national income (GNI) of DAC members fell to only 0.22 percent in 2000–01, from 0.24 percent in the previous year, but recovered to 0.23 percent in 2002. To support the implementation of sound economic policies and institutional reform thereby achieving enduring poverty reduction in low-income countries, several bilateral donors have announced initiatives to raise ODA in the years ahead. For example, European Union (EU) members have committed themselves to raise their collective ODA to 0.39 percent of GNI by 2006, and the United States has announced plans for a

5 billion increase in its core development assistance by 2006, an increase of close to 50 percent from 2000 levels. While these plans for ODA increases are expected to be phased in, intensified efforts by low-income countries to increase the efficiency of resource use and to mobilize financing from other sources, including domestic savings and FDI, coupled with a substantial increase in ODA, will be critically important if these countries are to achieve the Millennium Development Goals (MDGs).5

Official export credit agencies, key players in the provision of nonconcessional official financing to (mainly middle-income) developing countries, increased their exposure in 2002, reversing a declining trend since 1998. Available evidence suggests that trade financing, the bulk of which is provided by the private sector in normal circumstances, contracted during financial crises in a number of countries. Most official export credit agencies, which have played an important role in medium-and long-term financing, responded to these financial crises procyclically, tightening their policies on new commitments and reducing overall exposure to crisis countries. In response to the reduction in access to trade credit, the authorities of several crisis countries attempted to mitigate the adverse impact of the collapse in trade financing through alternative financing schemes, often with international support. The disruption caused by the generally unprecedented loss of access to trade finance points to the need for a better understanding of the causes and nature of the problem, and raises the broader question of what can be done to alleviate the harmful effects of sharp reversals in financing on developing countries affected by crisis.

Further progress was made in the debt-relief efforts for HIPCs, most of which are in sub-Saharan Africa. As of end-November 2003, 27 countries had reached their decision points under the enhanced HIPC Initiative, of which 8 (Benin, Bolivia, Burkina Faso, Mali, Mauritania, Mozambique, Tanzania, and Uganda) had reached their completion points.6 In combination with traditional debt relief and pledges of additional bilateral debt forgiveness, the external debt of the 27 decision point countries will be reduced by almost two-thirds in net present value (NPV) terms to $26 billion, bringing their indebtedness to levels below the average for all developing countries. For the 27 countries taken together, annual debt service paid during 2001–05 is expected to be about one-third less than that in 1998–99.

Paris Club creditors have agreed recently on a new approach—the Evian Approach—to deal with debt problems in non-HIPC countries. This new consensus aims to provide debtor countries a more tailored response to ensure that debt restructuring provides these countries with a debt treatment that reflects their financial needs and the objective of ensuring long-lasting debt sustainability. As such, it is expected to make a significant contribution to the current efforts to make resolution of debt crises more orderly, timely, and predictable.

Maintaining long-term external debt sustainability remains a key challenge for many developing countries, even for those that have benefited from significant debt relief under the enhanced HIPC Initiative. The experience of the past two years has shown that external debt indicators of HIPCs can deteriorate quickly when growth and export performance worsen. Similarly, large new borrowing, even on concessional terms, that outpaces the development of the country’s repayment capacity can bring about a rapid deterioration of these indicators. After HIPC relief, these countries’ external debts will be owed mainly to multilateral creditors, since financing from private sources is limited, most bilateral donors provide grants, and most Paris Club creditors have agreed to provide additional debt forgiveness above and beyond the HIPC Initiative. To ensure long-term external debt sustainability, debtors will need to pursue prudent new borrowing policies, and creditors, including multilateral creditors that have become the main sources of new loan disbursements, will have to provide their financial support on terms consistent with these countries’ repayment capacity.

Resource flow analysis in this report relies heavily on statistics compiled by the Development Assistance Committee (DAC) of the Organization for Economic Cooperation and Development (OECD), which defines net flows as total new flows (gross disbursements) minus repayments of principal, offsetting entries for debt relief, repatriation of capital, and occasional recoveries on grants and grant-like flows. Net transfers equal net flows minus interest and other returns on capital.

Developing countries and territories as defined by the World Bank and used by the OECD’s DAC on the basis of per capita gross national income (GNI) in 2001 includes 185 countries/areas or territories (see Table A1.2 in Appendix I).

For an assessment of earlier developments, see Ross and Harmsen (2001).

Adopted by beads of states in the course of the UN Millennium Summit held during September 6–8, 2000.

For a detailed discussion of the status of implementation of the HIPG relief, see International Monetary Fund and World Bank (2003a and 2005b). 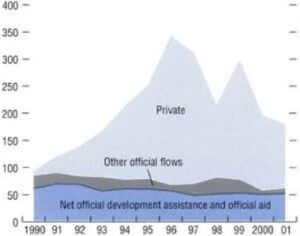 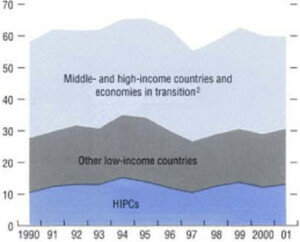