Cambodia became independent from France in 1953 and experienced a 17-year period of relative political stability and steady economic growth, starting from a development base similar, if not superior, to that of other countries in South East Asia (Box 1). During that period, the riel was the legal tender and was used both for financial transactions and as a store of value. Following the March 1970 coup d’état that toppled the government, the country was quickly drawn into the international turmoil of the subregion, and eventually into a civil war. In 1971, a flexible exchange rate system was introduced, while the exchange rates were unified. However, owing to economic difficulties, a dual exchange rate system was reinstated in 1973 with a “basic” rate for most transactions and a “preferential rate” for aid-related imports and services.1

Cambodia became independent from France in 1953 and experienced a 17-year period of relative political stability and steady economic growth, starting from a development base similar, if not superior, to that of other countries in South East Asia (Box 1). During that period, the riel was the legal tender and was used both for financial transactions and as a store of value. Following the March 1970 coup d’état that toppled the government, the country was quickly drawn into the international turmoil of the subregion, and eventually into a civil war. In 1971, a flexible exchange rate system was introduced, while the exchange rates were unified. However, owing to economic difficulties, a dual exchange rate system was reinstated in 1973 with a “basic” rate for most transactions and a “preferential rate” for aid-related imports and services.1

The extreme revolutionary experience (an “agrarian moneyless society”) of the Khmer Rouge during 1975–79 involved bans on private property, banking, and money, and brought the country to utter economic and human disaster, during which an estimated one and a half million people, about one-fifth of the population, perished.2 The Khmer Rouge were driven out of most parts of Cambodia by the Vietnamese in 1979.3 Under the new transition regime, the riel was reintroduced in 1980 as the domestic currency, and an official dual exchange rate system was created. A state-owned monobank was set up at the same time, whose role included central, commercial, and development banking activities, according to the socialist economic model.

1980—Reintroduction of the riel as domestic currency.

May 1993—National elections sponsored by the United Nations.

July 1993—Formation of a national government.

January 26, 1996—Law on the Organization and Conduct of the National Bank of Cambodia.

November 23, 1998—Formation of a coalition government.

January 1, 1999—Introduction of the value-added tax.

May 31, 2000—Deadline for submitting applications for a new license for commercial banks.

January 2, 2001—Launching of a clearinghouse for dollar-denominated checks.

Dollars started to flow into Cambodia in the mid-1980s, as the United Nations (UN) dispatched humanitarian and emergency aid, international non-governmental organizations were allowed to return, and remittances from abroad resumed. During the 1980s, the country achieved only limited monetization and most domestic transactions were based on barter, with gold being the universal means of transacting and hoarding.4 During 1988–91, the Vietnamese disengaged from Cambodia, leaving an unsettled political situation in their wake. Massive central bank financing of recurrent budget deficits during that period resulted in high inflation, in the range of 90 to 177 percent a year (end-period), and in an erosion of public confidence in the national currency. In 1993, the official exchange rates were unified de facto, and since then a free but managed floating exchange rate regime has existed.5

During 1991–93, UNTAC took over the country’s administration. UNTAC has represented the UN’s costliest peace restoration effort to date, and resulted in a virtually overnight dollarization of the urban economy. This major nation-building operation involved the stationing of up to 22,000 UN military and civilian personnel throughout Cambodia, and it is estimated that the total cost of the two-year operation was close to $2 billion. Although evidently not all of this cost occurred in Cambodia, the total amount represented about 75 percent of the 1993 Cambodian GDP.6 The UNTAC personnel arriving with dollars in cash and needing a wide array of services (local staff, housing, transportation, interpretation, etc.) and goods in a largely barterized economy quickly introduced Cambodia to massive dollarization. The inflow of cash dollars was compounded by the return at about the same time of large numbers of Cambodian refugees and expatriates from abroad, also bringing dollars or Thai baht with them. As a result, foreign currency deposits in the banking system started to rise notably. Since 1992, they have constituted an increasingly important component of the banking system’s deposit base (Figure 1).

In 1994, the authorities embarked upon a reform program, supported by the IMF under the Enhanced Structural Adjustment Facility (ESAF), and made notable progress in reining in inflation to single-digit levels, strengthening the fiscal position, furthering financial stabilization, and opening up the economy. The government also achieved limited progress in some areas of structural reforms, such as state-owned enterprise reform and privatization, but policy implementation in other areas (notably civil service reform and forestry management) met with difficulties. However, owing to the continued unsettled political situation and to a resurgence of governance problems, the ESAF program was suspended in September 1995, and it expired in August 1997. Cumulative disbursements amounted to about $61 million. The political situation deteriorated to the point that factional fighting erupted in July 1997. Compounded by the onset of the Asian crisis, the economic situation worsened, growth slowed, the government resorted to budget financing from the National Bank of Cambodia in 1998 for the first time since 1993, and inflation picked up to double digits.

Not surprisingly, against the backdrop of continued large inflows of foreign assistance and private transfers, and of political uncertainty, the dollarization of the Cambodian economy continued during 1994–96, as illustrated by the continued rise in foreign currency deposits. However, the July 1997 fighting and the regional financial crisis led to a deterioration in confidence. National elections took place on July 26, 1998, but it took until November 1998 to complete the formation of a coalition government and to restore domestic stability and international confidence. As a combined result of the expansionary policy and of the regional financial crisis, the riel depreciated during mid-1997 and 1998, but its depreciation was smaller than those of other Asian currencies. The limited use of the riel in Cambodia minimized the impact of this depreciation on the economy. The effects of the political uncertainty seem to have been stronger than those of the regional crisis. During 1997–98, there was a decline in foreign currency deposits, but we show in the next section that “de-dollarization” during those two years, as evidenced by a decline in foreign currency deposits, is not a correct economic assessment: dollarization (including cash holdings of dollars) during the period under review remained broadly constant—however, the composition of dollar-denominated assets held by agents did change.

During 1999, the authorities paved the way for resumed IMF lending by taking a number of fundamental financial measures (e.g., introduction of the value-added tax on January 1, 1999) and structural measures (curbing illegal logging and initiating civil service and military reforms). In October 1999, the IMF approved a second three-year (1999–2002) ESAF program, soon replaced by a Poverty Reduction and Growth Facility (PRGF) arrangement. Macroeconomic stabilization under the PRGF program has been largely successful to date: economic growth has resumed, fiscal balance has been restored, inflation has been reined in, revenue mobilization has improved, and a prudent monetary policy has been maintained. Accordingly, macroeconomic performance quickly rebounded from the relapse in 1997–98 and has improved notably, with estimated economic growth reaching on average more than 5 percent a year during 1999–2001, despite severe flooding in 2000 and 2001. Inflation, as measured by the consumer price index (CPI, end-of-period), turned negative during the same period (Figure 2) and the garment, tourism, and agricultural sectors posted strong growth, resulting in additional foreign currency inflows for the first two sectors. The good inflation performance reflected the authorities’ cautious monetary and fiscal stance, as well as cheaper imports from neighboring countries. The increase in broad money essentially resulted from a buildup in foreign assets, which itself stemmed from a rise in foreign currency deposits, while net domestic assets of the banking system declined, owing to a net repayment of government debt to the National Bank of Cambodia and a relative lack of financial intermediation.

(in millions of U.S. dollars) 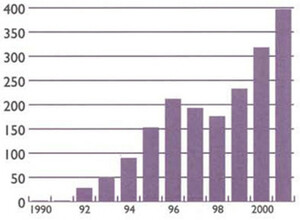 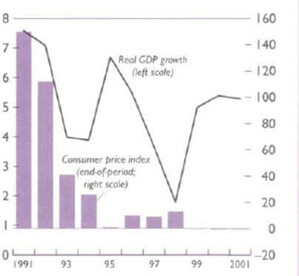