Public Spending on Education and Health Care and the MDGs

The bulk of the empirical evidence confirms that, over time, government spending has a positive effect on educational performance.35 Higher public spending on education tends to be associated with higher enrollment rates and increased chances that a student will continue on to the fifth grade.36 Higher public education spending is also associated with lower illiteracy rates.37 Allocating a higher share of the education budget to primary education is also found to strengthen educational attainment. The correlation between higher public spending and improvements in education indicators is nevertheless modest, as these indicators are affected more strongly by other factors, such as income levels and the sociodemo-graphic characteristics of the population.

Public health spending can also have a positive effect on health status. Public outlays on health care are positively correlated with life expectancy at birth38 and negatively correlated with malnutrition rates.39 However, the majority of econometric studies find that per capita income is a much more important determinant of health outcomes than health spending.40 Nonetheless, many of these studies have focused on the nexus between total public spending on health care and the health status of the population as a whole. Since the poor are more likely to utilize public health services, a more useful approach would be to assess the impact of government health spending on the indicators measuring the health status of the poor. Recent research along these lines confirms that government spending has a salutary effect on the poor’s health status, underscoring the potential role of higher outlays in helping countries meet the MDGs.41 Increased public expenditures for improved water supplies and sanitation would also help improve health indicators, as well as those relating to environmental sustainability.

The link between social spending and social indicators can be dramatically strengthened by eliminating waste and inefficiency. In many countries, governments are allocating too small a share of the education and health budgets to activities with the most powerful effects on basic social indicators. For example, a large share of budgetary resources in the social sectors is often used for wages, leaving few resources for nonwage inputs with high productivity, such as medicines and textbooks.42 Similarly, a majority of the benefits from public spending on education and health care do not accrue to the poor—including in low-income countries (Figure 1). In education, about one-quarter of public spending provides benefits to the richest 20 percent of the population, while the poorest 20 percent receives about 15 percent of the benefits from this spending.43 In contrast, public spending on primary education is more pro-poor, yet in a sample of 52 developing and transition economies for 1996, about one-fifth of education spending was allocated to tertiary education, an area that also has lower social rates of return.44 Similarly in the health care sector, spending on basic preventive health care, such as immunization and prevention of diseases, has a relatively larger impact on the poor,45 yet in a sample of 35 countries for 1997, almost two-thirds of public health care outlays were absorbed by curative care (for example, hospitals and medical equipment) rather than basic and preventive health care46 In many cases, there is also substantial leakage of public funds. For example, in Uganda, public expenditure tracking surveys revealed that during 1991–95, less than 15 percent of central government nonwage budgetary allocations for primary education actually reached the schools, with the remaining funds being used by local government officials for noneducation purposes.47

In its policy advice, the IMF recognizes the need to raise the level of social spending to help foster human development. Under IMF-supported programs, for example, education and health spending has risen significantly. Since the year preceding the program, education spending has increased by more than 1 percentage point of GDP, and health outlays have increased by about ½ of 1 percentage point of GDP, in low-income program countries (with smaller increases for program countries as a whole). (See Figure 2.) Spending on the social sectors has also increased as a share of total government spending. This has translated into sizable increases in real social spending per person; the annual rate of real per capita growth for both types of spending was about 2 percent for program countries as a whole and 3–3 ½ percent for low-income program countries (Figure 3). Spending increases have been accompanied by broad-based improvements in social indicators for education and health, particularly in the indicators associated with the MDGs. These improvements include those in primary school enrollment (0.8 percent per year), female primary school enrollment (1.2 percent per year), infant mortality (2.7 percent per year), immunization rates for measles (3.0 percent per year), and births attended by skilled staff (1.2 percent per year).

Measures to improve the efficiency of public spending are incorporated into a number of IMF-supported programs. About two-thirds of PRGF-supported programs include such measures, drawing on countries’ poverty-reduction strategy papers (PRSPs) or the World Bank.48 Specific measures vary, depending on country circumstances. For example, some countries are increasing the share of spending for inputs other than wages to improve the quality of spending (for example, The Gambia, Kenya, the Lao People’s Democratic Republic, Niger, Senegal, and Zambia).49 Other countries (for example, Azerbaijan, Cameroon, Mali, and Uganda) are granting selected wage increases to attract skilled workers, including in the social sectors.

IMF-supported programs also emphasize targeting to increase the efficiency of public spending. Some countries are reforming their subsidy programs by replacing those subsidies from which all consumers—poor and nonpoor alike—benefit with those that target only low-income groups. In other countries where the poor do not have access to health care and education services, the objective of reform is to increase equity by making sure that public provisions reach the intended beneficiaries. This can be facilitated by, for example, the elimination of primary school fees (as was done in Tanzania and Uganda).

In many countries, higher spending is needed in areas other than health care and education to enable them to move toward the MDGs. In addition to emphasizing social programs, it is crucial to implement other complementary programs—such as those for water and sanitation, rural development, and nutrition—to effectively improve social indicators and reduce poverty. Some countries may also need to devote more resources to prepare for the natural disasters to which they are prone. This is recognized in PRGF-supported programs, where countries define “poverty-reducing spending” in their poverty-reduction strategy papers (PRSPs). PRSPs have defined a range of programs as poverty reducing, including spending on primary education, basic health care, roads, rural development, agriculture, judicial systems, and anti-corruption efforts. Based on budgetary projections in 19 countries that most closely approximate the PRSP definition of poverty-reducing spending, these outlays will rise, on average, by about 2 percent of GDP in the first years of their PRGF-supported programs (most of which started in 2000). The share of total government spending absorbed by these outlays will also rise.

Certain government expenditures, such as temporary income transfers or public works programs, can help form social safety nets to protect the poor from the short-term adverse effects of reforms. The economic reforms needed to spur economic growth may, in some cases, have adverse short-term effects on the poor. These can be mitigated, however, with appropriate social safety nets to shelter the disadvantaged from the hardships that may be associated with the implementation of reform programs. In this way, economic reform can be consistent with countries’ poverty-reduction strategies and continued progress toward the MDGs.

Social safety nets should be in place before they are needed and should be well targeted to the intended beneficiaries. These programs should be directed primarily to those poor and vulnerable groups who are most adversely affected by the temporary shocks to income and general well-being caused by economic reform. Examples of social safety nets include cash and in-kind transfers, price subsidies, social services fee waivers, supplemental feeding and nutrition programs, public works programs, and microfinance programs, as well as other social insurance programs, such as unemployment benefits and minimum or social pensions.

The design of social safety nets can be aided by poverty and social impact analysis (PSIA). PSIA consists of the analysis—ex ante, during implementation of reforms, and ex post—of the positive and negative impacts of reform policies on the well-being of the poor and other vulnerable groups. As such, PSIA can be a powerful tool for both redesigning policies (to avoid an adverse effect on low-income groups) or for implementing social safety net measures.

PSIA is a key feature of PRGF-supported programs, although significant improvement is needed in this area. More than half of all PRGF-supported programs refer to some form of PSIA. However, the majority of measures that could potentially affect the poor have not been covered by PSIA or by social safety net measures. Moreover, in the majority of low-income countries, the technical capacity to perform PSIA is very weak. Thus, the IMF, together with the World Bank and other development partners, is actively working to widen the depth and scope of PSIA, with their efforts concentrating on increasing countries’ capacity to undertake such analyses, although experience indicates that it will be several years before most countries are able to implement PSIA based on analytical studies.

(In percent of total spending)

Changes in Education and Health Care Spending in Countries with IMF-Supported Programs, 1985–20001

(In units as indicated) 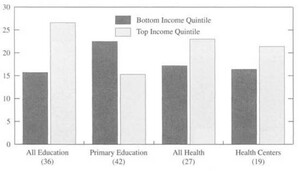 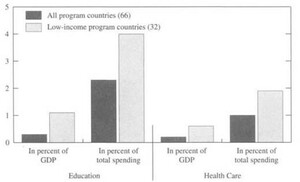 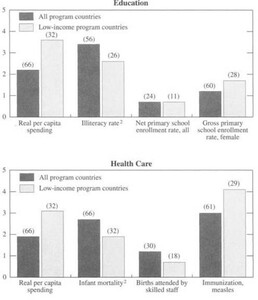