This key feature emphasizes that the distributional impacts of major macroeconomic or structural reforms should be considered and reported on in PRGF documents together with any countervailing measures to offset the impact of these reforms on the poor.

This key feature emphasizes that the distributional impacts of major macroeconomic or structural reforms should be considered and reported on in PRGF documents together with any countervailing measures to offset the impact of these reforms on the poor.

More than half of all PRGF-supported programs refer to some form of PSIA. PSIA consists of the analysis—exante, during implementation, and ex post—of the positive and negative impact of country policies on the well-being of the poor and other groups. When PSIA is defined broadly as instances where program documents describe the potential effects of one or more economic policies on the poor, about 60 percent of such programs include some form of PSIA. When PSIA is defined strictly to include instances where a study was undertaken to assess the effects of specific policies—“formal” PSIA—only one-third of PRGF-supported programs included such analysis. Furthermore, the majority of policies in PRGF-supported programs with important social impacts are not covered by formal or informal PSIA (Figure 12).

PSIA, broadly defined, is conducted on a much wider scale than it was under the ESAF. This has occurred even though ESAF-supported programs contained a larger number of measures with potentially adverse effects on the poor in both the macroeconomic and structural areas.42 About half of ESAF-supported programs incorporated some type of social safety net to address the adverse effects of reforms, however, suggesting that a good deal of the PSIA underpinning the design of these social safety nets may have been unreported in Board documents. Nevertheless, PRGF-supported programs report both more PSIA, and a larger share of countervailing measures, for almost all types of reforms.

The coverage of PSIA by type of reform varies. Coverage of contractionary expenditure, trade and exchange rate reform, and domestic pricing reform is widest (Figure 12). In many important categories of reform, however (e.g., revenue measures, civil service reform, and privatization), the coverage of PSIA is modest. A number of PRGF-supported program documents recognize that the use of PSIA has been limited in the past (Ethiopia, The Gambia, Mongolia, Mozambique, and Senegal), and note that assistance from the World Bank and other development partners will be instrumental in further progress in this regard.

PSIA is influencing programs in both the design of economic policies and the formulation of countervailing (compensatory) measures. In some cases, this has led to a modification in policies, because of concern over the possible adverse effects on the poor. For example, PSIA undertaken in Uganda led to a change in plans to liberalize the sugar industry.

In Senegal, rather than completely eliminating the subsidy for diesel and kerosene, a 15 to 20 percent subsidy was maintained, because of concerns about the impact of higher prices on the poor. In Cambodia, large-scale retrenchment of civil servants was delayed until adequate safety nets for retrenched government employees could be put in place.

About two-thirds of PRGF-supported programs include countervailing measures. These countervailing measures aim to offset the potentially adverse short-run effects of exogenous shocks or macroeconomic or structural reforms on the poor. These actions tackle the adverse effects of reforms that are not addressed by changes in policy design. Countervailing measures are most often found in response to changes in domestic prices, privatization, and exogenous shocks (such as changes to the terms of trade and natural disasters). Examples are a lowering of the withholding tax on cola nuts (Burkina Faso), and VAT exemptions provided for basic products (Mauritania); severance payments for employees affected by privatization (Mongolia and Vietnam) and retrenched civil servants (Kenya); higher spending on targeted social benefits to offset higher electricity tariffs and provision of limited quantities of free electricity for the poor (Georgia); and cross-subsidies and targeted tax relief to soften the blow on the poor from increases in petroleum and utility prices (Ghana).

Countervailing measures in PRGF-supported programs are not always accompanied by PSIA. In some cases, programs incorporate policy actions to address the adverse effects of reform measures, even though program documents do not refer to any PSIA indicating the need for such. As can be observed in Figure 12, documents are more likely to discuss countervailing measures than PSIA for increases in domestic prices, civil service reform, privatization, and changes in user fees. The number of measures accompanied by formal PSIA is even smaller.43 As experience in implementing PSIA deepens, it is expected that a higher share of countervailing measures will be designed with the benefit of formal analytical studies.

PSIA has been widely absent in the six full PRSPs in the sample, with the exception of Mauritania and Uganda.44 Data limitations, weak national capacity, and a lack of donor coordination are important obstacles to more widespread and systematic PSIA.45 Furthermore, it has been difficult to readily adapt the World Bank’s work on poverty, such as that contained in poverty assessments and public expenditure reviews, to provide insights into the impact of specific policy choices.

PSIA is likely to receive further impetus from a number of recent initiatives. While national authorities are expected to take the lead in this area, and to incorporate this analysis into their PRSPs, the World Bank is helping to build national capacity and deepen its analytical work in this area. A toolkit of different analytical techniques for conducting PSIA will be completed in 2002, and the Bank will seek to further disseminate information on best practices. In addition, the United Kingdom’s Department for International Development (DFID) will be undertaking a pilot project on PSIA in six countries (Armenia, Honduras, Mozambique, Rwanda, Uganda, and Vietnam), which countries can henceforth use as a resource in program design. In April 2001, guidelines for JSAs of PRSPs were issued, which specify, among other criteria, that staff should assess PRSPs on the basis of how well they describe the impact on the poor of sectoral and structural policies. A concept note on PSIA prepared jointly with the Bank was issued to staff in May 2001, and several internal seminars have been held for PRGF mission chiefs. PRGF documents are expected to include a description of PSIA being carried out in the country, a summary of discussions with the authorities on the social impact of key reforms, and a description of how these affected the design of policies and countervailing measures.

(Percentage of reforms covered by PSIA and countervailing measures) 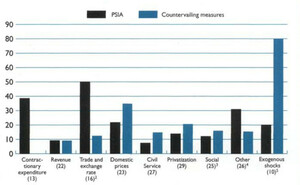