This key feature emphasizes the needs for public expenditure management measures that promote transparency and accountability in the use of public resources.

This key feature emphasizes the needs for public expenditure management measures that promote transparency and accountability in the use of public resources.

Almost all PRGF-supported programs place strong emphasis on strengthening governance through improved PEM.37 On average, each PRGF-supported program request or review includes between four and five new measures to strengthen PEM. Depending on the weaknesses of PEM capacity, the prominence of PEM measures varies widely, ranging from no policy actions in Ethiopia to 16 measures in Azerbaijan and 20 in Rwanda in their most recent programs.

The majority of these measures focus on strengthening budget execution, most notably with respect to the operations of the treasury and improving expenditure procedures (Figure 11). This reflects, in part, a need to strengthen the monitoring of fiscal performance under the program. Examples include introducing an integrated computerized fiscal and accounting information system to manage central government revenues and expenditures (Bolivia, Mozambique); introducing commitment control systems (Georgia, Ghana, Kenya, Malawi, Mozambique, Tajikistan, and Uganda); adopting modern principles of fiscal responsibility and transparency (Mozambique); and reforming procurement procedures (Azerbaijan, Cameroon, Guinea-Bissau, Kenya, Madagascar, and Mauritania). As part of the effort to ensure that public resources devoted to poverty reduction are reaching their intended uses—for example, that spending allocated for primary education actually reaches schools at the local level—about one-third of the countries in the study have also implemented expenditure tracking surveys.

With respect to budget formulation, a number of countries are strengthening budget classification, with a view to assisting efforts to identify and track poverty-reducing spending. This has initially focused on improving the reporting of broad-brush categories of social expenditure, and preparation of quarterly reports on budget execution of social spending. Other more general improvements in budget formulation could also be expected to strengthen the ability to track poverty-reducing outlays, including improved expenditure classification and implementation of a medium-term expenditure framework for priority sectors, particularly education and health.

In the area of budget reporting, programs have emphasized more rigorous auditing. This has involved establishing and staffing audit agencies (Azerbaijan, Cameroon, Cambodia, and Tajikistan) and the submission of accounts to the Auditor General. More timely fiscal reporting has also been incorporated in a number of programs. More generally, a number of countries have also sought to incorporate anticorruption strategies (Benin, Georgia, Ghana, Kenya, Lesotho, and Malawi).

Conditionality is placed on a large percentage of PEM measures. More than half of the PEM measures in country programs are included as prior actions, performance criteria, or structural benchmarks. These measures are found in all but one country in the sample; on average, each new program request or review contains about three measures with conditionality. As with the population of PEM measures as a whole, conditionality focuses primarily on measures linked to budget execution—an area (along with reporting) where PEM systems are relatively weak.38 Indicative of the high importance placed on strengthening PEM, about 40 percent of the conditionality in the PEM area takes the form of prior actions and performance criteria.

PRGF-supported program countries have largely been successful in meeting conditionality in the PEM area. Calculations based on the limited sample of measures for which data are available on the status of implementation showed that only half of all measures were strictly observed. Within a year of the due date, however, about 90 percent of all measures were implemented. This finding confirms the view that PEM measures often take longer to implement than envisaged, even with strong commitment on the part of the authorities. As could be expected, PEM improvements linked to stronger forms of conditionality (prior actions and performance criteria) fared slightly better than average. There is no systematic pattern regarding which kinds of PEM reforms were associated with the greatest degree of slippage.

Despite the strides made in the PEM area, a substantial unfinished agenda of reform remains, including making budgetary data more comprehensive and disseminating it to the public. The PRSP process has led to a more open debate on fiscal policies and a clearer articulation of the government’s policy intentions. The timely provision of comprehensive budgetary data can help ensure that fiscal policies and objectives are open to public debate. Many countries, however, fall short of this standard.

Fiscal data often are not comprehensive. In roughly one-third of countries, there are still considerable differences between budget coverage and the Government Finance Statistics (GFS) definition of the general government, often because of substantial extra budgetary activities. Analysis based on the fiscal modules for countries conducted under the Report on the Observance of Standards and Codes (ROSC) shows that it is rare for budgets to provide information on contingent liabilities, tax expenditures, or quasi-fiscal activities.39 Few budgets provide detailed information on the government’s medium-term fiscal plans, and only about half fully capture donor funds in the budget in a timely manner. In addition, spending outcomes often differ substantially from the budget, limiting the usefulness of the budget as an indicator of the government’s fiscal policy.

The dissemination of fiscal information is at times incomplete and subject to considerable delays. Most countries do not publish budget outturn data on at least a quarterly basis and within four weeks of the end of the period. Those that do often provide data that are highly aggregated and that capture only part of the government’s fiscal operations. Similarly, only about half of the countries publish data on public debt. Furthermore, final audited accounts are provided to legislatures with a substantial lag (more than one year) in many countries.40 These results underscore the need for continued close attention to PEM as an integral component of PRGF-supported programs—not only to enhance fiscal discipline, but also to improve the quality of the PRSP process.

External views are broadly in agreement with the staff assessments on PEM. In their formal and informal submissions for the review, donors generally agreed on the importance of PEM work and progress to date. The survey of the authorities in PRGF countries likewise reveals strong agreement that there is greater emphasis on improved management and accountability in the use of public resources under the PRGF. However, many donors and PRGF country authorities also expressed the view that there was a need for greater harmonization of PEM initiatives to reduce duplication and limit the burden on country authorities.41

(Number of measures per country) 1 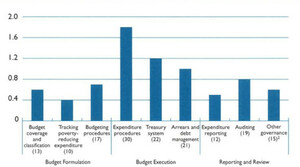