This key feature sets out the expectation that conditionality in PRGF-supported programs should focus on the IMF’s core areas of expertise and limit conditionality to key measures for the program.

This key feature sets out the expectation that conditionality in PRGF-supported programs should focus on the IMF’s core areas of expertise and limit conditionality to key measures for the program.

Considerable progress has been made in streamlining structural conditionality on the IMF’s core areas of expertise. The mandate in this area is that measures specified in the PRGF-supported programs should cover only those areas where the IMF has primary responsibility (and in these areas conditionality should be used parsimoniously). The only exception to this rule would be where a structural measure has such a direct, critical macroeconomic impact that the PRGF-supported program would be derailed unless the measure was implemented.31 Substantial progress has been made in this regard.

This streamlining of conditionality reflects the changing roles and modalities of collaboration in the PRSP framework between the IMF and the World Bank. In July 2001, the IMF and World Bank Executive Boards endorsed a strategy to strengthen collaboration between the two institutions on conditionality. Based on principles agreed to in 1998, the key features in the strengthened framework are clarity about responsibility, early and effective consultation, and separate accountability. The Boards also agreed that, to further clarify the delineation of responsibilities, it would be useful to adopt the practice of identifying one institution as the “lead agency” responsible for designing and monitoring conditionality in each policy area. In the future, Board documents should transparently and systematically set out the staff views of the lead agency on various issues and conditionality as an input to Board discussions, including more effective use of Bank inputs to Article IV consultations and IMF inputs in the context of the Bank’s country assistance strategies, economic and sector work, and programmatic lending.32

Streamlining is evident across forms of conditionality and other program measures (Figure 9). The reduction in conditionality was particularly significant for prior actions and benchmarks, whose number on average was cut by 47 percent to three and six conditions per program, respectively. The average number of performance criteria, already moderate under ESAF-supported programs, has declined further to fewer than three measures per program. In some programs, streamlining benefited from efforts to limit conditions that specify multiple steps to achieve the same objective, such as the introduction of a VAT or the design and implementation of civil service reform.

Confine Conditionality to Measures in the IMF’s Domain

The concentration of measures under PRGF-supported programs shows a clear shift to measures related to fiscal policy (Figure 10). Measures in the areas of fiscal management and fiscal transparency rose from 15 percent of structural measures in the ESAF subsample to 31 percent in the PRGF subsample (see Section VII). Tax policy and administration measures roughly maintained the same share in both the subsamples (16 to 18 percent). The concentration of structural conditionality in the fiscal area is consistent with the renewed emphasis on poverty reduction in the PRGF and the related need to maintain revenue and ensure that fiscal resources are spent efficiently for appropriate purposes.

For areas outside the IMF’s domain, conditionality in most recent programs has generally been applied when such measures were critical to the country’s fiscal and/or external targets (Box 5). In such cases most staff reports provided justification for their inclusion in the program. Justification was clear in 60 percent of all PRGF-supported program reports and in 73 percent of reports for new PRGF-supported programs approved since July 1, 2000. For example, the importance of ensuring a healthy banking sector, and thus containing the fiscal cost of restructuring, was particularly clearly presented in the case of Vietnam. Financial sector reforms have also taken center stage in Mozambique’s PRGF-supported programs, and a clear case has been made in the relevant staff report. In countries where governance is a critical issue, such as Kenya and Cameroon, programs have also focused on fiscal transparency as well as governance-related issues not in the IMF’s core area of expertise.

These efforts at streamlining structural conditionality have been pursued flexibly. In cases where measures have been deemed to be essential on macroeconomic grounds, conditionality has been retained. For example, the programs with Azerbaijan, Cameroon, and Ghana include conditionality in the energy sector. In the cases of Azerbaijan and Ghana, domestic arrears buildup or domestic debt buildup and inappropriate pricing policies are posing serious risks to macroeconomic stability, whereas in the case of Cameroon, the conditionality—related to the formulation of a reform strategy for the oil sector—is viewed as essential for enhancing the economy’s growth prospects. Other cases where sector-specific problems have important macroeconomic repercussions are Cambodia (logging sector), Mali (cotton), and Senegal (groundnuts).

(Average number of conditions per program)

(In averages per request or review) 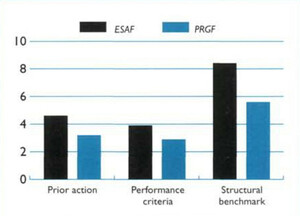 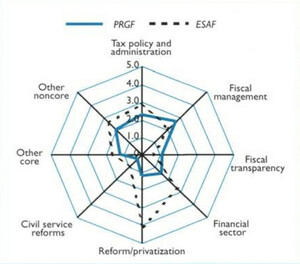