Fiscal policy represents the main macroeconomic policy instrument at the disposal of the authorities in the Baltics. This is due to their decision to anchor their macroeconomic stabilization efforts with the adoption of hard exchange rate regimes, which have served the countries well and allowed them to withstand some crisis situations, such as the Asian and Russian financial crises in 1997 and 1998.

Fiscal policy represents the main macroeconomic policy instrument at the disposal of the authorities in the Baltics. This is due to their decision to anchor their macroeconomic stabilization efforts with the adoption of hard exchange rate regimes, which have served the countries well and allowed them to withstand some crisis situations, such as the Asian and Russian financial crises in 1997 and 1998.

Since the mid-1990s, the Baltics have been approaching a balanced-budget position, with Estonia and Latvia actually achieving a surplus in 1997. This trend was interrupted only in the wake of the Russian crisis, when the resulting economic slump, among other things, triggered a significant, yet temporary, rise in fiscal deficits in 1998 and 1999 in all three countries. The general government fiscal deficit in Lithuania soared to 8 ½ percent of GDP. while Estonia’s and Latvia’s deficits rose to about 4 ½ percent and 4 percent of GDP. respectively, in 1999. This reflected, to some extent, the automatic stabilizers at work, but also a discretionary easing of fiscal policy through significant increases in public pension benefits and public sector wages in Estonia and Latvia and savings restitution payments and net lending in Lithuania.

Subsequently, when economic conditions improved, all three governments embarked upon considerable fiscal adjustment. The fiscal deficits were reduced to about 3 percent of GDP in Latvia and Lithuania and 0.3 percent of GDP in Estonia in 2000, Such efforts reflected the improved economy and. in the case of Latvia and Lithuania, a recognition of the need to contain domestic demand and rein in the sizable external current account deficits (see Figure 1).

Most of this fiscal adjustment took place through expenditure restraint. This was most noticeable in Lithuania, where the expenditure-to-GDP ratio dropped from about 40 percent in 1999 to 33 percent in 2000. But Estonia and Latvia also succeeded in compressing spending by 4 percentage points each during the period. Apart from reducing capital spending programs, restraint was exercised mainly in the area of pensions and public sector wages, essentially the same categories that had driven up the deficits a year earlier.

The fiscal adjustment continued in 2001, and all three countries aim at moving toward a balanced budget. While Estonia is projected to record a moderate surplus in 2001, Latvia and Lithuania have targeted deficits of about 1 ½ percent of GDP each. This provides the Baltics with a comfortable starting position to achieve a balanced budget over the next few years. Efforts have been made to contain the wage bill, initiate civil service reform, overhaul the national pension systems (see Schiff and others. 2000), and rationalize other spending through targeted public sector reforms. At the same time, efforts to enhance the tax systems and tax administration have been initiated. Strong economic activity also has helped to sustain high tax receipts in all three countries.

The Baltic countries’ expenditure and tax structures are similar to those in current EU countries and have little resemblance to those in countries of the Commonwealth of Independent States (CIS). Nevertheless, the composition of spending provides some scope for reprioritization and enhanced efficiency, which will be the focus of the medium-term fiscal frameworks presented in Section V. By contrast, the Baltics will be required to make only relatively marginal changes to their tax systems to meet the requirements of EU membership (Box 1).

The Baltics, like other transition countries, need to determine the appropriate size of their respective governments. Although there is no normative guideline on the optimal size of government, from a positive perspective a variety of political and economic factors could be assessed to determine such size: per capita GDP. the openness of the economy, the extent of unemployment, dependency ratios, and political variables. Begg and Wyplosz (1999) found that, except for Bulgaria, all transition economies included in their sample had oversized governments (when political and economic variables were controlled for).

Most transition economies have experienced a decline in the size of government during the past ten years. At end-2000, the unweighted average of current spending in the CIS was about 26 percentage points of GDP lower than in the euro area and about 16 percentage points lower than in the Baltics (Figure 2). This fairly low expenditure ratio in the CIS has been driven largely by a lack of revenue and available financing, but it also reflects some real expenditure cuts, including subsidies and transfers, in the early transition years mandated by the significant drop in output.6

EU accession will require some changes in the composition of revenue for the Baltics. It can be expected that tax revenues will be strengthened from efforts to meet these requirements, and that a positive impact on tax administration may also materialize. Briefly, these requirements can be summarized as follows:

By contrast, the expenditure structure of the Baltics and other leading EU accession candidates largely resembles the one in the euro area. However, total spending, especially in Lithuania, is still significantly below the euro-area level. Capital spending is higher in most accession countries than in the euro area, largely reflecting the need for EU-related investments and the transition process more generally, but it is noteworthy that such outlays account for a smaller share in total spending in the Baltics relative to the other accession candidates. Given the relatively low debt indicators, interest payments account for only a small part of the Baltics’ spending, comparable only to that in the Czech Republic and Slovenia.

The share of spending on goods and services in total spending is relatively large in the Baltics. Social spending is comparatively low in Estonia and Lithuania, limiting the scope for reductions, although improved targeting, together with the impact of the pension reforms being undertaken, may yield some savings. By contrast, social spending in Latvia is close to euro-area levels, with correspondingly larger room to improve its targeting.

The tax structures of the Baltic countries are similar to those in other EU and EU-accession countries and carry relatively few vestiges of the pre-transition systems (see Figure 2). Some features still bear traces of the old system, including high payroll tax rates, which continue to generate a greater share of tax revenues than in most EU and other Organization for Economic Cooperation and Development (OECD) countries, and in Lithuania the maintenance of a schedular system of personal income tax.

For the most part, however, the Baltics moved quickly to dismantle the system inherited from the former Soviet Union and adopted new tax laws that reflected the needs of a market-based economy and that were also designed to be consistent with the tax systems prevailing in western Europe, As a result, unlike some CIS countries, the Baltics did not experience a precipitous decline in tax receipts in the 1990s. A decline in corporate tax receipts (reflecting poor coverage of the emerging private sector and, to some extent, tax exemptions granted to promote investment) was compensated by the good performance of labor and consumption taxes in response to strong growth and rising real incomes. As with the recovery of economic activity more generally, substantive and sustained reforms in the Baltics led to a better tax performance than more gradual reforms in the CIS (Ebrill and Havrylyshyn, 1999).

The structure of the tax systems in the Baltics compares with that of most OECD countries. The overall tax burden in Estonia is close to the OECD average, and it is somewhat below the OECD average in Latvia and Lithuania. Although below the EU average, the tax burden in the Baltics is similar to that in the lower-income EU member states but much higher than observed in almost all advanced economies when they were at similar stages of development. Of the four EU accession countries of the 1970s and 1980s, all had a lower average tax burden at that time than the Baltic countries do now. Indirect taxes are a significant source of tax revenue in the Baltics, accounting for 42 percent of total tax revenues compared with 31 percent on average across the EU.

The tax mix in the Baltic countries is fairly diversified, with personal income, social security, and consumption taxes accounting for the major part of revenues. By comparison with EU countries, the share of corporate income tax is low, whereas the share of consumption taxes is relatively high. As noted above, the Baltics (especially Estonia and Latvia), like other transition economies, have typically relied on payroll taxes as a major source of revenue, and the share of social security taxes in the Baltics is similar to the EU average. The share of other taxes, including those levied by local governments, is very small.

The Baltic Countries and Selected Other Countries: General Government Expenditure and Tax Structure, 20001 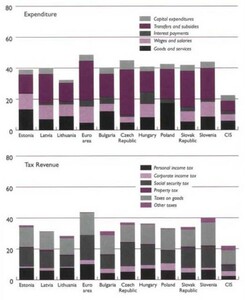