Ten years after regaining independence, the three Baltic countries—Estonia, Latvia, and Lithuania—are on the verge of acceding to the European Union (EU) and the North Atlantic Treaty Organization (NATO). Over the course of the decade, sound macroeconomic conditions and full-fledged market economies were created. The Baltics are now fully functioning market economies.

Ten years after regaining independence, the three Baltic countries—Estonia, Latvia, and Lithuania—are on the verge of acceding to the European Union (EU) and the North Atlantic Treaty Organization (NATO). Over the course of the decade, sound macroeconomic conditions and full-fledged market economies were created. The Baltics are now fully functioning market economies.

The cornerstones of this successful transition1 were the fast privatization of public enterprises with reliance on foreign strategic investors, a free trade regime, full current and capital account convertibility, early establishment of a legal framework for private activity, and a transparent macroeconomic policy framework underpinned by credible exchange rate pegs. The speed and depth of the reforms reflected broad public support for freeing the economies from the legacies of Soviet planning.

The Baltics successfully stabilized their economies early on by firmly pegging their exchange rates and following prudent fiscal policies (Figure 1), Estonia (since 1992) and Lithuania (since 1994) have operated under a currency board arrangement (CBA) anchored on the deutsche mark/euro and the U.S. dollar, respectively; Lithuania switched to a euro anchor in February 2002, and Latvia has maintained a conventional peg to the IMF’s SDR since 1994. After a sharp initial contraction,2 growth in the Baltics resumed in 1994 and was among the highest in transition economies in 1997. Despite the liberalization of most prices, inflation was quickly brought under control and is converging toward levels prevailing in the EU. External current account deficits have been quite large since 1994, but large inflows of foreign direct investment (FDI) covered much of the domestic saving-investment gap. The rapid recovery from the Russian financial crisis in 1998 testifies to the resilience of the Baltics to external shocks.

The Baltic countries adopted a tight fiscal stance to support their fixed exchange rate regimes. Fiscal deficits were quickly reduced, mainly through a strong revenue effort, and were maintained at or near balance during 1995–98. Although the Russian crisis led to a widening of fiscal deficits in 1999, this was largely reversed in 2000, As a result of the prudent fiscal policies, public debt is very low by international standards, particularly in Estonia and Latvia.

While privatization has been important for enhancing enterprise performance and restructuring, well-developed bankruptcy procedures, a good legal and regulatory framework, and a sophisticated financial system have also played an important part in increasing such dynamism. Estonia leads in these areas, and Latvia and Lithuania are catching up quickly, although proper enforcement and implementation of some newly passed laws will take more time.

The Baltics are also reforming their pension systems. The traditional pay-as-you-go (PAYG) system has been reinforced by gradually increasing the retirement age, indexing benefits, and establishing a closer link between contributions and benefits. In Latvia, the PAYG system was supplemented with a privately managed, fully funded second pillar in 2001, while in Estonia and Lithuania, the introduction of a second pillar is envisaged for 2002 and 2004, respectively,

Run-Up to EU and NATO Accession

At the 1993 Copenhagen summit, the EU took a decisive step toward enlargement. Countries in central and eastern Europe associated with the EU would be given the opportunity to accede to the EU—making enlargement a question of when, rather than if. However, it was also decided that prospective membership would be subject to the fulfillment of certain criteria, known as the “Copenhagen criteria.” According to these criteria, accession to the EU requires, among other things, the existence of a functioning market economy and the capacity to cope with competitive pressure and market forces within the Union; and the ability to take on the obligations of membership including adherence to the aims of the European political, economic, and monetary union.

All three Baltic countries are now considered capable of meeting these requirements. As of end-December 2001, Estonia, Latvia, and Lithuania have closed 20 or more of the 31 negotiation chapters of the EU acquis communautaire, including the difficult environmental chapter, and are expected to close the remaining chapters by the end of 2002. This has raised the prospect of all three countries being invited to join the EU in 2004, following the decision of the Laeken European summit in December 2001.3 In the same vein, the Baltics could be invited to join NATO in the near future.

Building on the achievements to date, the next few years will be crucial for meeting the preaccession requirements for both the EU and NATO while maintaining strong and sustainable growth in a low-inflation environment. The fiscal policy challenges facing the three Baltic countries (and the other accession candidates) in this regard are formidable:

The EU does not prescribe a specific fiscal adjustment path or fiscal policy stance to accession candidates. However, the candidates are expected to pursue sound macroeconomic policies that will help them to grow robustly and sustainably in a low-inflation environment so as to achieve rapid real convergence with the EU. The provisions under the Maastricht Treaty 4 and the Stability and Growth Pact (SGP)5 become binding constraints only after accession to the EU, with the former treaty representing the criteria for adopting the euro and the latter pact a continuing obligation as an EMU member.

This leaves open the question of which medium-term fiscal strategy the Baltic countries and other EU accession candidates should pursue in the period leading up to EU accession. This paper aims to provide some guidance in this regard, looking at theory and empirical evidence—including from the EU accession countries of the 1970s and 1980s. It also develops medium-term fiscal frameworks to illustrate the tensions, trade-offs, and financial flows within the EU that could materialize over the next five years or so.

The analysis supports the Baltic authorities’ intention to balance their budgets over the economic cycle. This is based on a number of considerations.

Other, more traditional concepts of fiscal sustainability do not, however, provide sufficient guidance in this regard. For example, public debt in the Baltic countries is low by international standards, reflecting the prudent fiscal policies pursued throughout most of the transition period. Similarly, external debt considerations are not expected to pose a policy constraint in the foreseeable future.

The experience of countries that achieved EU accession during the 1970s and 1980s provides valuable lessons for the Baltic countries. This experience suggests that reducing the tax burden in the Baltics may present a major challenge; the Baltics are relatively well-advanced in harmonizing their indirect taxation, but the adoption of the Common External Tariff (CET) may require significant changes, and transfers from the EU budget may generate an upward pressure on the size of government in the Baltics. Empirical evidence presented in this paper suggests that prudent fiscal policy and macroeconomic stability may contribute to real convergence.

The Baltic countries’ fiscal challenges are assessed in the context of medium-term frameworks. The frameworks are intended to illustrate the expected trade-offs and tensions in the budgets of the three countries over the next few years. They also provide projections for the likely financial flows to and from the EU budget before and after accession. While subject to considerable uncertainty, the scenarios nevertheless highlight the difficult policy choices that are needed to comply with the tax harmonization and acquis-related spending requirements, as well as the rise in military spending to secure early NATO accession. This will imply the crowding out of other, non-priority spending so as not to endanger the achievement of the balanced-budget objective.

This reprioritization notwithstanding, discretionary spending would still rise in real terms, on average, during the next five years. Under the baseline scenario (assuming EU accession in 2004), the annual real increase in such spending could average about 3 percent in all three countries. This implies a moderate reduction in discretionary spending by about 2 percentage points of GDP between 2001 and 2006. This could be effected mainly by moderate wage increases, coupled with civil service reforms; improved targeting of social benefits; and effective cuts of expenditure on goods and services.

Overall, however, the Baltics are well placed to face the fiscal challenges of EU and NATO accession. With modern tax and expenditure structures in place at the outset, and a long tradition of prudent fiscal policy to support the maintenance of their exchange rate regimes, they can be expected to embrace these challenges in the years ahead. While curtailing nonpriority spending may be politically difficult, the benefits from such an undertaking—in terms of improving efficiency of public spending, enhancing growth prospects, and accelerating real convergence with the EU—will ultimately make this endeavor worthwhile. 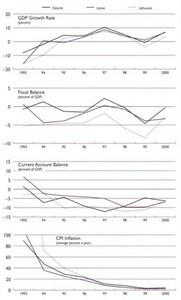