Macroeconomic Frameworks in the Original Programs

As discussed above, the original macroeconomic frameworks envisaged relatively moderate improvements in the current account, ranging from half a percentage point of GDP in Brazil and Indonesia to about three percentage points in Thailand. Growth was expected to slow—on average by 3 percentage points—but the programs projected a contraction of output only in two countries (Brazil and Turkey).

Events proved otherwise. Continued turbulence in financial markets meant that capital outflows turned out to be larger and more persistent than anticipated. With limited reserves to intervene in most cases, the exchange rate took the initial brunt of the adjustment, far overshooting any pre-crisis estimates of overvaluation. Very quickly, however, current accounts began to adjust as well, and program projections were revised by significant margins (Figure 4.1).

In line with successive upward revisions of the projected current account balances, growth projections had to be adjusted downward as it became evident that economic activity was rapidly faltering.44 In the event, the magnitude of the current account adjustment in most countries broadly matched the change in net financing flows from official and private sources, with reserve changes in most cases broadly in line with program projections. Unanticipated capital outflows, and hence the unanticipated current account adjustments, were particularly large in Korea, Mexico, and Thailand. In Korea, the adjustment in the current account was, in fact, larger than required as official reserves increased faster than programmed. By contrast, in Brazil, financing flows turned out somewhat more favorable than projected and the current account position remained essentially unchanged. See Table 4.1.

For a given current account adjustment—mostly reflecting capital outflows—there was a corresponding fall of imports and rise in exports.

The export performance of the Latin American countries and Turkey differed significantly from that of the Asian countries. Export receipts (in U.S. dollar terms) rose by almost 25 percent in Mexico, and by almost 30 percent in Argentina (in Turkey, exports grew by 15 percent, while they declined by 7 percent in Brazil). In contrast, despite the substantial real exchange rate depreciations, export receipts actually declined by 5 to 12 percent in the Asian countries. This partly reflects the less favorable external environment—as growth in trading partners was weaker in the Asian crisis countries than in the other cases—and the regional nature of the crisis meant that these countries were competing against each other. But it probably also reflects, to a considerable extent, the disruption to supply associated with balance sheet adjustments in Asia, given the foreign debt exposure of the corporate and banking sectors. Some price behavior also counteracted the increases in export volumes. Finally, given the export performance, imports fell very sharply (particularly in Korea and Thailand), associated with a correspondingly sharp fall in real GDP.45

Initial program projections for output growth were clearly far off the mark in all the crisis cases examined.46 One way to view this is simply as the counterpart to the larger-than-anticipated capital outflows and the corresponding forced current account adjustment. But it is also useful to examine the nature of these output declines from a variety of other vantage points, particularly with a view to understanding the appropriate policy response (which is discussed in Chapter V, below). This section examines the nature of the output declines using various approaches, each of which provides particular insights, but probably none of which fully captures the extraordinarily complex output dynamics in capital account crises.

As a first step, the changes in output may be decomposed into “growth contributions.” It bears emphasizing, however, that without a priori exogeneity assumptions, these decompositions cannot say what is “driving” the output dynamics and, in particular, whether it mainly reflects shocks to the demand or the supply side. One such exogeneity assumption has already been discussed: to the extent that the capital outflows forced a current account adjustment, this determined the contribution of net exports to real GDP growth. A second a priori reasonable exogeneity assumption concerns public consumption, since this is largely a policy variable.

The main text reports a decomposition of output movements into aggregate supply shocks and aggregate demand shocks. There are a variety of ways of undertaking this decomposition. One approach is to exploit the univariate time-series properties of the real output series using, for example, a Beveridge-Neison decomposition to identify long-run versus short-run movements (where the former might be considered supply shocks and the latter demand shocks). An alternative approach, developed by Blanchard and Quah (1989), exploits information on multiple macroeconomic time-series (prices and real output).1

From the figure, it is apparent that an increase in aggregate demand (a rightward shift of DD along SS) will in the short-run raise both prices and output. In the long-run, however, this aggregate demand shock can only affect prices and not the level of output. A supply shock, by contrast, can affect both the level of output and of prices in the long-run (via a movement of the LL curve).

This suggests a particular identification scheme: aggregate supply shocks are those shocks that can affect output in the long-run. It turns out that this restriction on the long-run properties of the shocks is sufficient to identify the aggregate supply-aggregate demand shocks uniquely within a bivariate system.

The first step in the analysis is to verify that the first differences of output and prices (GDP deflator) are stationary. Augmented Dickey-Fuller tests reject the null of a unit root (except for Thailand, where rejection of the unit root for real GDP is marginal, and Argentina, where the data span is simply too short).2

Next, a reduced-form VAR in ΔQ and ΔP is estimated:

where X = {ΔQ, ΔP}’ and B (L) is a 2 x 2 matrix of lag polynomials. The VAR can then be inverted to obtain the moving average representation:

The shocks, E. however, are a combination of supply and demand shocks. The objective, therefore, is to write X, in an alternative representation:

where η={ηs, ηd}’= are uncorrected, and have the interpretation of aggregate supply and aggregate demand shocks respectively.

Comparing polynomials in the lag operator, Aj=CjA0, for some (2 x 2) matrix A0. Then, using the fact that A0’A0 = Ω gives three restrictions on the elements of A0, leaving one element unrestricted. This element is pinned down by the economic restriction identified above, namely that a pure aggregate demand disturbance cannot have a long-run impact on the level of output. Once An has been uniquely determined, the fundamental (i.e., aggregate supply and aggregate demand) shocks are given by ηt= .3

As noted above, the growth contributions exercise cannot determine the extent to which the declines in output primarily reflect aggregate demand or supply shocks. In fact, there are both theoretical reasons and empirical indications that suggest that the initial steep output declines were at least partly associated with negative shocks to aggregate supply.

Although the precise propagation mechanism of the aggregate shock depends on the structure of the economy, the sharp exchange rate movements at the onset of the crises are likely to have disrupted aggregate supply in countries in which the foreign exchange exposure of the corporate and banking sectors was substantial. In addition, because of inter-firm relationships, the sudden withdrawal of foreign savings from the economy would have had a cascading effect on the availability of finance, including for working capital, compounded by the effects of corporate sector bankruptcies.48

This seems consistent with the view that, particularly in the case of the Asian crises, balance sheet weaknesses in the corporate and financial sectors combined with the sharp exchange rate movements and a withdrawal of external financing at the onset of the crises, resulted in widespread corporate distress with persistent adverse effects on the productive capacity of the economy.

The decompositions (particularly for Mexico, Thailand, Indonesia, and Korea) also suggest that there are important macrodynamics associated with the currency crises, whereby the initial aggregate supply shock is followed by a decline in aggregate demand with a one to two quarter lag. This seems intuitively plausible as well: the initial corporate sector distress translated into lower investment spending and increased redundancies and unemployment, which in turn depressed private consumption demand. In turn, this shifting dynamic of a supply shock followed by (and compounded with) a negative aggregate demand shock complicated the role of macroeconomic—especially fiscal—policy, as discussed below.

A second indication comes from the behavior of inventories. In particular, during the periods of the steepest falls in output, inventories declined—both in levels and in terms of contributions to growth (Table 4.2). This was particularly striking for the Asian crisis countries, where the decline in inventories amounted to some 10 percentage points of quarterly GDP during the quarters of steepest output decline. In Mexico, the change in inventories was positive, but the contribution to growth was negative. In each of these countries, the rate of decline in inventories either slowed or reversed after one to two quarters. Without further identifying restrictions, this behavior of inventories is consistent with a number of possible explanations, including a lower demand for inventories by firms in anticipation of lower demand for their output. Notably, however, in the most standard “production-smoothing” model of inventory management, this decline in inventories would be more consistent with a supply—side shock—such as an increase in production costs—than with a demand shock.51 Such evidence must, of course, be interpreted with particular caution since a formal model of production-smoothing inventory behavior is not being tested here, and given the notoriously low quality of inventory data in most countries (and in Indonesia and Thailand, in particular). Nonetheless, it is perhaps of some relevance when considered together with other evidence. 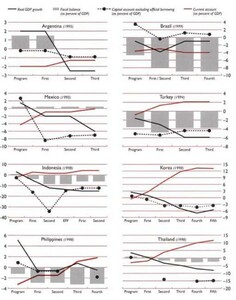 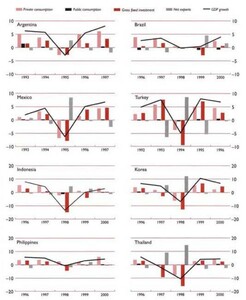 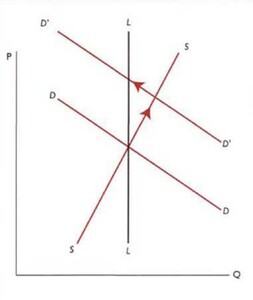 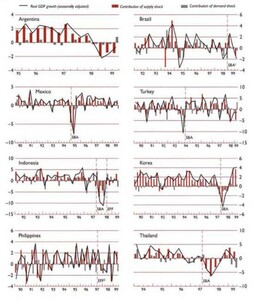