Kosovo needs to make budget decisions with a clear view to achieving a sustainable fiscal position. The objective should be to avoid the need for sharp expenditure adjustments in the future, when external financing sources are likely to dry up. Although donor support for reconstruction might continue for several years, as it has in Bosnia and Herzegovina, donors have repeatedly stressed that support for recurrent expenditure will need to decline substantially in the next few years. In the short term, this will constrain spending options as increases in tax revenue replace declining donor grants. In the longer term, a fully sustainable fiscal position would require all expenditures—including the three big off-budget items, investment, defense, and debt service—to be financed mainly from local revenues and, perhaps, a modest level of borrowing. Moving along a path that prepares for such an eventuality is entirely consistent with the “considerable autonomy”principle underlying the UN’s SC1244.

Kosovo needs to make budget decisions with a clear view to achieving a sustainable fiscal position. The objective should be to avoid the need for sharp expenditure adjustments in the future, when external financing sources are likely to dry up. Although donor support for reconstruction might continue for several years, as it has in Bosnia and Herzegovina, donors have repeatedly stressed that support for recurrent expenditure will need to decline substantially in the next few years. In the short term, this will constrain spending options as increases in tax revenue replace declining donor grants. In the longer term, a fully sustainable fiscal position would require all expenditures—including the three big off-budget items, investment, defense, and debt service—to be financed mainly from local revenues and, perhaps, a modest level of borrowing. Moving along a path that prepares for such an eventuality is entirely consistent with the “considerable autonomy”principle underlying the UN’s SC1244.

The priorities for ensuring that budgets are on a sustainable path are thus to diversify the tax system and contain expenditure growth through careful review of spending needs. In this context, the low tax-to-GDP ratio indicates considerable potential for raising revenues in the future; but at the same time there will be pressures to expand social spending, including to cover payment of pensions.

On tax policy, IMF technical assistance has outlined a sequenced plan for improving existing tax instruments and introducing new ones (see Box 3). The main steps are as follows.

At the same time, Kosovo will need to continue building an efficient intergovernmental structure. Whereas a recent UNMIK regulation has set out the broad structure of municipal government, detailed expenditure responsibilities and the associated financing through a system of transfers and taxes (shared as well as local) have yet to be spelled out. Given the small size of Kosovo, and its further fragmentation into some 30 municipalities, there is a case for keeping decentralized taxing powers to a minimum, although an early start could be made in introducing local property taxes, a typical staple of local government. Ensuring that there are sufficient controls and incentives in place to prevent fiscal indiscipline at lower levels of government will be a major challenge. At the central level, the formal integration of current and capital budgets would help with budget planning. Current good practices of transparent fiscal accounting for recurrent expenditures (up-to-date information is posted to the CFA website) should continue and be extended to the consolidated budget and to the budgets of the municipalities.

The 2001 budget aims to make progress toward self-sustainability by focusing on revenue raising and containing overall expenditure growth. Assuming that tax administration improves further and that planned taxes are introduced, revenue is expected to increase by 40 percent to DM 338 million.

Assuming a wage freeze and that employment is reduced toward the originally budgeted levels for 2000. on-budget expenditures are estimated at DM 500 million, or some DM 70 million above the expected 2000 outturn. Much of the increase reflects higher costs from expanded public services, expansion in the welfare budget to make up for a withdrawal of humanitarian aid and to pay disability payments to veterans, and allocations for capital maintenance and some investment. Donors are being asked to provide about DM 160 million in financial support in 2001. They would then be financing about one-third of recurrent expenditures compared with almost a half in 2000.4

There are, however, considerable risks that could require downward flexibility in expenditures if sufficient donor financing is not forthcoming. In particular, the projections assume the introduction of a VAT by mid-2001, which is ambitious given the need for taxpayer education.5 The VAT is projected to raise DM 30 million on domestic value-added in 2001. The tax projections also assume continuation of the strong underlying performance of border collections seen since the first quarter of this year. And, while the assumptions do not build in undue optimism—suggesting that there may be upside poten tial as well—collections have been buoyed by special factors (car imports) and slowed toward the end of 2000. All this suggests that, in order to provide maneuverability on expenditures, it will be important to enforce the intended wage freeze and carry out reductions in employment in some budget sectors. Strong efforts will also be needed to contain subsidies to the utilities by eliminating overstaffing and improving bill collection.

An examination of fiscal sustainability requires looking beyond the near term, an exercise that is necessarily highly uncertain in the case of Kosovo. Accordingly, this section looks at longer-term scenarios for the fiscal accounts. For analytical purposes, it is assumed that Kosovo remains an autonomous economic entity. The main scenario assumes real GDP growth of 10 percent a year, inflation of 2 percent a year, the full implementation of the IMF staff’s tax policy proposals, and the ending of donor support for the recurrent budget in 2003. At that point, foreign-financed reconstruction would already be on a sharp decline. Alternative scenarios examine the sensitivity of the fiscal accounts to lower growth and to delays in introducing tax instruments. More details can be found in Appendix II.

The main scenario suggests that an early exit of donor budget support would impose tight limits on spending. Following on the assumed strong recovery in GDP and the broadening of tax instruments, revenue growth is projected to average about 25 percent a year in 2001-06, bringing the revenue-to-GDP ratio up toward 15 percent. Even so, the arithmetic straitjacket of eliminating donor recurrent budget support implies that current expenditures would grow on average by little more than 5 percent a year up to 2003, or about 3 percent a year in real terms (Figure 3 and Table 7). This would imply fairly tight restraint in view of likely new demands on the budget for capital maintenance, more comprehensive social benefits, and the effects of demographic trends.6 After 2003, continuing revenue growth would not be offset by declining donor support, implying scope for more rapid growth in spending that, for illustrative purposes, is assumed to be partly allocated to topping up declining externally financed capital spending. On a consolidated basis, current spending would level off by mid-decade at close to 12 percent of GDP and capital expenditure at 7-8 percent of GDP.7 It is assumed that more than half of capital spending would continue to be financed by foreign donors.

The extra room for spending in the medium term could easily be eaten up by the need to incorporate in the budget some potentially big-ticket items (defense, debt service, or pensions). For example, even a small defense force might cost on the order of 2 percent of GDP a year, and debt service, assuming debts were not repudiated, could add 1 to 2 percent of GDP.8 On pensions, old liabilities might have to be serviced, and there could be considerable pressure for a new, more comprehensive pension scheme. The latter could become a substantial burden on the budget if coverage were broad and conditions for reestablishing social security contributions remained difficult. For example, paying a pension equal to only 30 percent of the average budget wages (currently, DM 275 a month) to 12 percent of the population would amount to a transfer cost of about 5 percent of GDP in the medium term. While this would be modest by the standards of many public pension schemes, and there would likely be some offsetting savings on social assistance, the cost would put a heavy strain on contribution rates more likely would require substantial subsidization from the budget) if it were introduced before there was a recovery of taxable employment.9 A pay-as-you-go scheme could also build up problems for future generations.

Although the parallels should not be drawn too closely, comparison with the postwar experience in Bosnia and Herzegovina provides a benchmark for the scenario. Three main points arise.

Kosovo’s expenditure constraints would be more severe if the economy were to grow less strongly in the medium term or if there were delays in implementing tax measures. For example, if real GDP growth were limited to 5 percent a year—not a disaster scenario—there would be no room for an increase in current expenditures in real terms in 2001-03 if donors insisted on removing budget support by 2003. Nor would the pickup in expenditure growth after 2003 be as strong as in the higher-growth scenario, implying that the squeeze to accommodate new programs or to incorporate off-budget items would be much tighter. The constraints on expenditure would also be much tighter if there were delays in introducing new taxes, given that it takes time for revenue from new taxes to build up (Figure 6). For example, if the VAT and wage tax were postponed by 12 months from their planned implementation dates, the revenue and expenditure-to-GDP ratios could be as much as 1 percentage point lower by mid-decade. There would, of course, also be a tight squeeze in 2001.

At the same time, there is potential for more positive outcomes that could alleviate some of the constraints on expenditure. First, tax revenues could prove to be more buoyant in the future, taking into account their low starting level and factoring in the potential for improving tax administration. Assumptions about the success of the wage tax in particular err on the conservative side, and under the main scenario the tax-to-GDP ratio would, by middecade, still be below the current level in Albania. There would also be some scope to further broaden tax instruments and raise marginal rates. Second, in the medium term Kosovo will likely have alternative financing sources, including domestic borrowing. A sustainable borrowing level could in principle alleviate the spending constraint by a fewpercent of GDP. Third, donors may be more generous to Kosovo than assumed.

In addition, donors are providing direct support (about DM 40 million in each of 2000 and 2001) to the electricity company to import electricity.

Plans to introduce a wage tax in 2001 are currently suspended. However, the tax would not be expected to raise much revenue in 2001.

Demographic analysis is rather speculative, but an increase in the number of school-aged children is expected in coming years. Emigration could also raise the dependency rate and put pressure on the fiscal accounts in the absence of an ability to tax remittances from overseas workers and to properly means-test dependents.

Note that budget wages are not grossed up for income taxes in the consolidated presentation. If this were done, gross expenditure levels would be about % of 1 percentage point of GDP higher, although the overall budget constraint would be unchanged.

Based on the order of magnitude that Bosnia and Herzegovina is paying.

Note that the scenario described in Table 7 does not incorporate social security contributions.

Statistics on GDP in Bosnia and Herzegovina, both pre- and postwar, are extremely imprecise. Reliable estimates of prewar per capita GDP in Kosovo are not available. However, before the breakup of the former Yugoslavia, Kosovo was considered poorer than the republics of Bosnia and Herzegovina, the former Yugoslav Republic of Macedonia, and Montenegro.

Kosovo and Bosnia and Herzegovina: Postconflict GDP per Capita

Kosovo and Bosnia and Herzegovina: Revenue and Budgetary Support 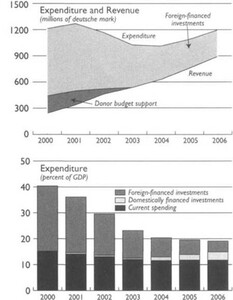 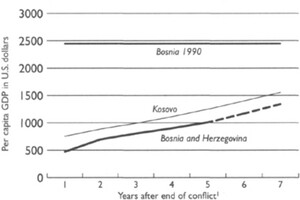 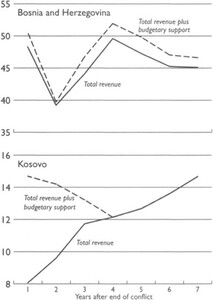 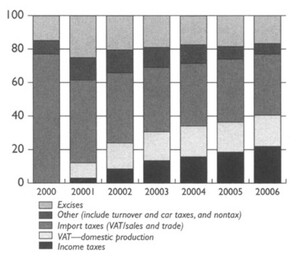