During the 1990s, in addition to the Cross-Border Initiative, countries in eastern and southern Africa embarked on a number of bilateral and regional trade arrangements (RTAs). These arrangements include COMESA, SADC, SACU, EAC, and the IOC. There is also the free trade agreement between the European Union (EU) and South Africa, that presages significant preferential liberalization on the north-south axis; the recent accord between ACP countries (African, Caribbean, and Pacific) and the EU, that extends for a considerable period the concessions of the Lomé conventions; and the African Growth and Opportunity Act that provides for duty-free treatment of Sub-Saharan African exports to the United States.

During the 1990s, in addition to the Cross-Border Initiative, countries in eastern and southern Africa embarked on a number of bilateral and regional trade arrangements (RTAs). These arrangements include COMESA, SADC, SACU, EAC, and the IOC. There is also the free trade agreement between the European Union (EU) and South Africa, that presages significant preferential liberalization on the north-south axis; the recent accord between ACP countries (African, Caribbean, and Pacific) and the EU, that extends for a considerable period the concessions of the Lomé conventions; and the African Growth and Opportunity Act that provides for duty-free treatment of Sub-Saharan African exports to the United States.

The member states of COMESA (consisting of 18 ESA countries plus Djibouti, Egypt, and Sudan) have been implementing phased preferential reductions in import tariffs in recent years with the objective of achieving a free trade area by October 2000. The aim is to establish a customs union by 2004, in which there will be a common external tariff structure with a small number of tariff bands. So far, progress on intraregional tariff liberalization has been mixed. As of March 1, 1999, only Egypt and Madagascar met the targeted 90 percent margin. Eight countries (Comoros, Eritrea, Kenya, Mauritius, Sudan, Tanzania,18 Uganda, and Zimbabwe) had agreed to an 80 percent preferential margin, and Malawi to a 70 percent margin. In addition, three countries (Burundi, Rwanda, and Zambia) had offered a 60 percent margin. Seven countries (Angola, Democratic Republic of Congo, Djibouti, Ethiopia, Namibia, Swaziland, and Seychelles) had not made any preferential tariff reductions, although Namibia and Swaziland were given derogations because of their membership in SACU, and Djibouti did not levy discriminatory import taxes. Both the EAC and the IOC support the effort of their members to abide by the trade liberalization goals of COMESA.

Over half of the countries in COMESA also participate in the CBI, which encourages a “fast track” to trade liberalization. The CBI originally sought to establish free trade among participating countries and a harmonized external tariff by October 1998. External tariffs were to have no more than three nonzero rates, a maximum rate of 20–25 percent (including all import taxes), a difference between the lowest and the highest rate of no more than 20 percentage points, and a weighted-average rate of less than 15 percent. Although none of the CBI countries met the target for eliminating intraregional tariffs, 10 of the 14 countries implemented preference margins of 60–80 percent by end–1998. Outcomes on external tariff reductions have also fallen short of the targets; Zambia and Uganda are the only two countries that have met the agreed targets. However, most CBI countries achieved significant progress in eliminating nontariff barriers, reducing the monopoly power on trade of state marketing boards or state enterprises, liberalizing foreign exchange regimes and domestic financial markets, harmonizing road transit charges, and introducing a single goods customs declaration form. In some cases, there was also significant progress in simplifying investment procedures, particularly through the establishment of a one-stop investment approval authority. Since May 2000, the CBI changed its name to Regional Integration Facilitation Forum (RIFF), refocusing its activities on investment facilitation while at the same time broadening its agenda to include other issues related to regional macroeconomic developments and cooperation among the RTAs.

Although the SADC free trade protocol was signed in 1996 and has been ratified by most countries,19 details have not been agreed on how nontariff barriers and intraregional tariffs will be phased out within the eight-year period, expected to begin in September 2000, for the establishment of a free trade area. Three classes of products have been defined according to the speed of liberalization: immediate, gradual, and sensitive products. For goods in the latter category (including textiles and automotive products), tariffs will only come down at the end of the eight-year period. The more developed member countries (South Africa and its SACU partners) will reduce their tariffs on imports faster than other SADC countries, and tariffs on imports of non-SACU countries from BLNS (Botswana, Lesotho, Namibia, and Swaziland) countries will fall faster than tariffs on imports from South Africa. There is no plan for a concerted reduction in external tariffs, which are widely different across SADC countries. However, product-specific rules of origin determining the domestic content requirements for a large number of products are being considered, including a 100 percent domestic content requirement for (primarily agricultural) inputs that are produced within SADC.

Members of these RTAs are also trying to foster economic integration by other mechanisms in addition to tariff reductions. The SADC, for instance, is developing policies and stimulating joint projects and standards across areas such as transport, power generation, water, human resource development, and finance and investment. COMESA has streamlined customs procedures, promoted cross-border vehicle licensing and insurance, and is working to facilitate cross-border payments and settlements. However, there is considerable overlap in the membership of these arrangements, giving rise to a number of problems discussed in Section VII below.

Owing primarily to its size but also to its more advanced level of industrial development, South Africa accounts for more than 70 percent of the imports of other countries in the ESA region. This leads to a large trade surplus with the region of about US$4 billion. The BLNS countries, Malawi, Mozambique, Zambia, and Zimbabwe exhibit a high degree of reliance on South Africa for their total imports, ranging from 35 percent to 60 percent, and only Zimbabwe sells more than 20 percent of its exports to South Africa.

Trade links among ESA countries have intensified in recent years: the share of intraregional exports in total exports increased from 4 percent in 1990 to 9 percent in 1999 (Figure 4.1). This increase in intraregional trade reflects predominantly the intensification of links with South Africa following the demise of the apartheid regime, as there was a small decline in intraregional trade among ESA countries excluding the SACU countries (see Table 4.1). The share of imports from industrial countries has declined for all countries except SACU and Madagascar, as South Africa has displaced some of their products, and there has been an increase in South African exports to the EU.

Within ESA, regional links are most intense within SADC followed by the CBI and COMESA (Appendix II. Tables A9–A11). In 1999, about 10 percent of total SADC trade was intraregional, compared with 6 percent for COMESA. These links have also intensified over time in SADC, as the share of intraregional imports in total imports grew from about 5 percent in 1990 to 12 percent in 1999. By contrast, intra-COMESA trade has remained virtually unchanged during this period. 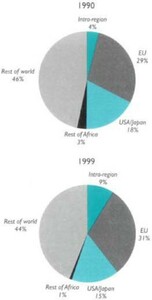