When it adopted inflation targeting in September 1992, the United Kingdom had involuntarily exited from its fixed exchange rate regime and had experienced a sharp currency depreciation as a result. The macroeconomic background was one of high and rising inflation expectations but a contracting real economy. The initial conditions for inflation targeting were not, therefore, particularly propitious.

When it adopted inflation targeting in September 1992, the United Kingdom had involuntarily exited from its fixed exchange rate regime and had experienced a sharp currency depreciation as a result. The macroeconomic background was one of high and rising inflation expectations but a contracting real economy. The initial conditions for inflation targeting were not, therefore, particularly propitious.

Despite this unfavorable backdrop, the United Kingdom’s experience with inflation targeting has been relatively successful so far. Retail price inflation has averaged 3 percent per year since 1993, and since 1997 it has been at or slightly above the Bank of England’s target of 2.5 percent. Inflation expectations, derived from the difference in yields between nominal and inflation-indexed bonds, have been anchored at around 2.5 percent for over a year. What factors, conjunctural and institutional, have contributed to this success story?

The Impact of Devaluation

At the beginning of September 1992, inflation expectations along the entire term structure stood at around 4½ percent a year. By the end of that month, following the pound sterling’s exit from the European Exchange Rate Mechanism (ERM), they had risen to 6 percent 10 years ahead, and 7 percent 20 years ahead. The loss of credibility was thus instantaneous. In the event, however, those pessimistic expectations were confounded. Although the value of sterling fell 15 percent, the pass-through of import prices at the retail level was limited. And given the weak first-round effect, there was little scope for a second-round wage-price dynamic to take hold. What accounted for the limited pass-through and the short-circuiting of the wage-price spiral? Are there lessons for other countries?

Events immediately following sterling’s exit from the ERM suggest some compression in all of these margins. An endogenous supply-side response limited first-round pass-through. This appears to have resulted from the depressed state of domestic demand in the United Kingdom at the time, which left suppliers unable to raise prices for fear of further depressing demand and losing market share. This pattern of limited pass-through was repeated in many other countries in the 1990s that experienced sharp depreciations, such as Australia, Finland, and Sweden.

The Institutional Framework and the Inflation Target

The institutional framework for inflation targeting in the United Kingdom has evolved during the period the regime has been in place but is now set out explicitly in the Bank of England Act of 1998. This legislation gives the Bank of England instrument independence, to be exercised by a nine-person Monetary Policy Committee (MPC). The inflation target itself is set by the government; thus the MPC is goal-dependent. The MPC meets monthly to decide interest rates. The minutes of its deliberations are published, together with the votes of individual members, with a two-week lag. Several other vehicles ensure the accountability and transparency of the MPC’s decisions. These include the publication of a quarterly Inflation Report, summarizing the Bank of England’s inflation assessment; a mandatory open letter to the Chancellor of the Exchequer in the event inflation breaches the target by more than 1 percentage point in either direction; and appearances by members of the MPC before parliamentary committees.

The move to instrument independence, first announced in May 1997, prompted an immediate fall of 50 basis points (half a percentage point) along the entire term structure of U.K. inflation expectations. The published minutes, the Inflation Report, and the parliamentary committee appearances expose the MPC’s analysis to a powerful external discipline. Besides meeting a democratic demand for accountability, these measures have increased internal incentives within the Bank of England to maintain and improve the quality of its analysis.

The effects of greater transparency in monetary policy are already evident in the yield curve. Transparency has increased the predictability of the short end of the yield curve, in particular, at the time of monetary policy changes. For example, during the period when sterling operated within the ERM, the average “surprise” in three-month interest rates following a 1-percentagepoint rise in official rates was around 50 basis points. Over the period of inflation targeting, the average surprise has fallen to around 12 basis points. And interestingly, since May 1997, when the MPC was formed, the average surprise has been lower still, at 10 basis points. This suggests that the move to inflation targeting has been associated with a significant damping in yield curve uncertainty. It also suggests that, contrary to the predictions of some outside commentators, a committee-based approach to policy setting, with individual votes expressed and published, has not reduced the predictability of monetary policy actions in the United Kingdom.

The centerpiece of the United Kingdom’s monetary framework is a point target for annual inflation of 2.5 percent. The choice of this figure is dictated by several factors, including the well-known measurement biases in price indices and the recognition that some of the costs of inflation—such as those associated with imperfect indexation of the tax system—may be nontrivial even at low inflation rates. Importantly, however, an inflation rate of 2-3 percent also seems fairly well aligned with the inflation preferences of the U.K. general public. Public acceptability is an important factor in ensuring the ongoing legitimacy of any country’s monetary framework, especially in its early stages.

What this means in practice is that adverse inflation outcomes are still vigorously offset through monetary policy, but favorable inflation shocks are instead accommodated. The reason for this asymmetry in response is that re-flating the economy following a favorable inflation shock would mean inflicting a further disinflation on the economy at some later stage. Rather than do this, it may be better to pocket the lucky inflation shock—to seize the opportunity—and accept temporary overachievement of the inflation target. Many countries in recent years, including Israel most recently, have found themselves needing to behave in this asymmetric fashion.

At root, the monetary policy rule under inflation targeting can be simplified to:

The Bank of England makes clear the extent of ex ante inflation forecast uncertainties by constructing a probability density function, or fan chart, for inflation forecast outcomes up to two years ahead. This is published in the quarterly Inflation Report. (A fan chart for forecast output growth is published as well.) The published distribution illustrates the MPCs views of both the variance of likely inflation outcomes and any potential skews or asymmetric risks to inflation. The distribution quantifies these uncertainties and skews; it deemphasizes point inflation forecasts, since these are almost certain to be incorrect ex post; and it thereby allows explicitly probabilistic statements to be made about monetary policy. For example, it allows (conditioned on the assumption of unchanged nominal interest rates) statements such as “there is an x percent probability of inflation lying between y percent and z percent two years ahead.” This probabilistic approach maybe particularly useful at times of significant inflation uncertainty, or when the balance of inflation risks is highly asymmetric.

There is also, however, an ex post dimension—that is, an accountability rather than a transparency dimension—to dealing with inflation uncertainties. Shocks are certain to push inflation away from the target, even if only temporarily. An independent central bank (the agent) needs to be able to explain those deviations to the government and the public (the principal). The United Kingdom operates an open letter system to meet this demand for accountability. If inflation deviates from the target by 1 percentage point or more in either direction, the MPC writes a published letter to the chancellor explaining why the deviation has occurred and describing what the MPC intends to do to offset it and over what time horizon. However, the choice of an appropriate time horizon for inflation targeting also raises a number of technical questions.

Fundamentally, the optimal forecast horizon under inflation targeting depends on two factors: the length of monetary transmission lags (a “technology” constraint), and policymakers’ output and inflation preferences (a “taste” constraint). Taking lags first, simulations in the United Kingdom suggest that monetary policy has its maximum marginal effect on output after around one year, and on inflation after around two years. This stylized fact helps justify the Bank of England’s choice of a forecast horizon of around two years.

Dealing with the Exchange Rate

A key issue for inflation targeting countries, as small, open economies, is how monetary policy should respond to movements in the exchange rate. This becomes a particularly thorny issue following a sharp exchange rate depreciation, like that the United Kingdom faced in September 1992.

The Bank of England’s approach to dealing with the exchange rate problem has been to try to identify the underlying source of the exchange rate shock. For example, is the shock real or monetary in nature? Is it domestic or foreign in origin? Is it temporary or permanent? Without answers to these questions, it becomes very difficult to determine the effects of a given exchange rate movement on monetary conditions. For example, a real exchange rate shock would have very different implications for output than a monetary shock, and likewise if a shock were believed to be temporary rather than permanent.

But how are these different shocks teased apart? The Bank of England has developed a number of ways of decomposing exchange rate changes. One is to extract the proportion of a given exchange rate change that can be accounted for by relative yield curve movements—that is, monetary shocks—on the assumption that uncovered interest parity holds. Figure 2 offers two examples of such a decomposition: first, following sterling’s appreciation between 1996 and 1998; and second, following sterling’s depreciation after exiting the ERM in 1992. In the first case, monetary “news”—the rise in the U.K. yield curve relative to that overseas—can account for perhaps only around 3 percentage points of the more than 20 percent appreciation. In the second case, however, the relative easing of U.K. monetary policy following exit from the ERM plausibly accounted for most, if not all, of sterling’s subsequent depreciation.

A second type of decomposition can be used to derive a measure of the foreign exchange risk premium, for example, by using survey-based measures of exchange rate expectations. Plotting the risk premium in the United Kingdom against that in the euro area over recent years shows an interesting pattern. The risk premium on sterling assets became strongly negative in the immediate runup to European monetary union, perhaps reflecting uncertainties about that process. This fall in the sterling risk premium plausibly accounted for some of the appreciation of sterling against the European currencies during this period. Subsequently, as euro-related uncertainties resolved themselves from the middle of 1998 onward, the sterling risk premium rose, and (until recently anyway) sterling fell back with it.

United Kingdom: Impact of Monetary Shocks on the Exchange Rate in Two Episodes 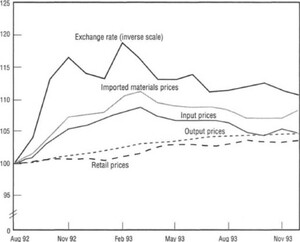 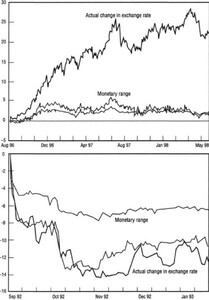