The monetary policy transmission mechanism is complex and our understanding of it imperfect. The Bank of Canada’s mainstream paradigm is quite explicit and well known and consists of three major sets of linkages. The first is from the instrument, the target band for the overnight (or oneday) interest rate,2 to other financial variables: the term structure of market interest rates, rates on deposits and loans at financial institutions, and the exchange rate. The second linkage runs from these financial variables to aggregate demand and the output gap. The third set of linkages runs from the output gap, inflation expectations, and the exchange rate to inflation.

The Bank of Canada considers it important to bear in mind that the success and credibility of the monetary and fiscal policy frameworks will condition the way in which the transmission mechanism works in practice. The Bank of Canada also finds it useful to have a checklist of the exogenous shocks that typically hit the economy (bottom of Figure 1).

The term structure of interest rates in Canada is strongly influenced by the term structure of world real interest rates, by risk premiums related to the Canadian government’s debt and deficits (relative to those in the rest of the world), and by domestic inflation expectations. However, in the past a rise in nominal domestic short-term rates (and more specifically in recent years, in the target band for the overnight rate) has generally translated into a rise in nominal domestic rates all along the term structure. These effects have typically been smaller, the further out along the maturity spectrum one is looking (Clinton and Zelmer, 1997). Research at the Bank of Canada has concluded that there has been an essentially stable (if not precise) relationship between rates set by deposit-taking financial institutions on loans and deposits and market rates of similar maturities (Clinton and Howard, 1994). The exchange rate responds in an important way to unexpected changes in interest rate differentials between Canada and abroad.

As understood at the Bank of Canada, the mainstream transmission mechanism is one in which aggregate demand depends on two variables. The first is real interest rates (relative to equilibrium real interest rates), which affect consumption spending (especially on durable goods) through permanent income effects, and which affect decisions to invest in housing and real business physical capital. The second is the real exchange rate, which affects exports and imports in the usual ways.

The empirical evidence for Canada suggests that short-term (or perhaps short- to medium-term) interest rates matter the most for aggregate demand. The effects of changes in interest rates and the exchange rate on aggregate demand build up only slowly over time. There is little contemporaneous effect, but by the third or the fourth quarter the effect is economically significant, and the maximum effect is reached after six to eight quarters.

Impact on Inflation from the Output Gap, Expectations, and the Exchange Rate

A key part of the Bank of Canada’s view of the monetary transmission mechanism is the effect of excess demand or supply in product markets on the rate of inflation. Thus, changes in monetary conditions work through their effect on the output gap to influence the inflation rate over time.

Other key elements in the short-run inflation process are changes in relative prices. Arising from a number of sources, these can have once-and-for-all effects on the price level and therefore influence the measured inflation rate in the short run, but not necessarily the momentum of the inflation process. Because monetary policy can influence the exchange rate, exchange rate effects are particularly important to note in this regard (see Laflèche, 1996-97). Other specific shocks that have been important in the past include shocks to indirect taxes, energy prices, and food prices.

The Bank of Canada has relied mostly on the output gap channel to influence inflation (including the induced effect of the change in actual inflation thus produced through the backward-looking element of inflation expectations). It did not count on expectations being influenced by the target during the first few years of the inflation targeting regime. Nor has it relied on the exchange rate pass-through to consumer prices to guide inflation to its target. In principle, exploiting the effects of the exchange rate pass-through could shorten the time necessary to hit the inflation target, but at the cost of greater volatility in output.

The Bank of Canada uses a Quarterly Projection Model (QPM) as the main model and organizing framework for its medium-term economic projections, which are constructed quarterly. However, both the QPM and other models for inflation alone have been informed by a wide range of research with small models. These models have helped the Bank of Canada reach a better understanding of some of the workings of the economy as well as explore how to impose appropriate theoretical restrictions and grasp their implications.

Longworth and Poloz (1986) constructed a small model to examine various policy rules. Its prominent feature was its simplicity: there were four behavioral equations—for output demand, the inflation-unemployment relationship (a price Phillips curve), money demand, and the exchange rate—plus a policy rule and identities. The framework of the four behavioral equations plus the policy rule captured the mainstream model, in which the real interest rate and the real exchange rate affect the output gap and thus inflation. It also set the stage for subsequent estimation of reduced-form or vector autoregressive (VAR) models, many of which omitted money variables, since the stock of money did not enter the equations for the other variables. For example, Duguay (1994) estimated a reduced-form IS curve for output, in which changes in Canadian output depend on lagged changes in the real interest rate, the real exchange rate, U.S. output, real commodity prices, and a fiscal policy variable. He also presented a short-run Phillips curve.

In the construction of the calibrated QPM, as well as in subsequent work designed to calibrate stochastic shocks for use with the model, a number of VAR models were estimated by Bank of Canada staff. One of the most recent is reported in Black, Macklem, and Rose (1998) and contains six variables: potential output, real commodity prices, the price level, the sum of consumption and investment, the real exchange rate, and the slope of the term structure (the short-term interest rate minus the long-term rate).

Armour and others (1996) have constructed a vector error correction model in which the deviation of money from its long-run demand plays an important role. The model contains equations for Canadian output, prices, the stock of money (defined as M1), and interest rates.

The archetypical Canadian single-equation model of inflation would be an expectations-augmented Phillips curve of the following form:

In estimating such an equation, particular attention has been focused on the formation of inflation expectations and the measurement and relevant function of the output gap.

Until the last five years, most work at the Bank of Canada modeled inflation expectations as backward looking, with the sum of the coefficients equal to 1. But when inflation varies around a constant target, the inflation process no longer has a unit root. Then it is inappropriate to model expectations with the unit restriction on the sum of the coefficients. As one moves from one inflation regime to another, one would expect a learning process to occur, and thus the appropriate formulation for inflation expectations is quite complicated. Initial steps in modeling such a learning process (as it applies to the actual evolution of Canadian inflation) have been undertaken by Laxton, Ricketts, and Rose (1994) and Ricketts and Rose (1995) using a Markov switching process with three inflation regimes. Fillion and Léonard (1997) have used regimes similar to those captured in the Markov switching work in estimating a quarterly Phillips curve. Their model, which follows closely the archetypical model above, has inflation expectations in the current monetary regime that are close to 0.39 g(lagged inflation) + 0.61(inflation target).

The Bank of Canada has long been interested in developing structural macroeconomic models and using them for economic projections. The emphasis on structural models results from three main beliefs. The first is that economic theory and empirical work suggest the major elements in the monetary transmission mechanism. The second is that some of the major relationships in the economy are sufficiently stable that it is sensible to base an estimated or calibrated model on them. The third is that, in order to conduct policy to achieve an inflation target (or other nominal target), one must have a way of quantifying the link between current changes in interest rates and future values of the targeted variable. In September 1993 the QPM was introduced as the Bank of Canada’s projection model (see Poloz, Rose, and Tetlow, 1994, and Longworth and Freedman, 1995).

It is important to note that the use of structural models for economic projections has always been supplemented by judgment, particularly in the first few quarters of the projection. Judgmental adjustments include those based on information from variables that do not enter explicitly into the structural model, such as the monetary aggregates.

Over the years, the management of the Bank of Canada has developed a view of how the Canadian economy works, as well as processes that help in using this view effectively in the conduct of monetary policy. Perhaps six elements are of particular importance in this regard:

The views expressed in this chapter are those of the author. No responsibility for them should be attributed to the Bank of Canada.

The target band for the overnight interest rate is 50 basis points wide; the Bank of Canada aims to keep the rate in the middle of the band. 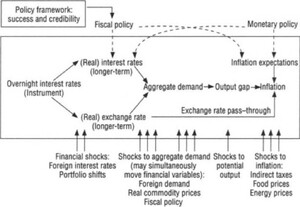