In January 1993 the Sveriges Riksbank, the central bank of Sweden, specified that the objective of monetary policy would henceforth be to limit the annual increase in the headline consumer price index (CPI) in 1995 and beyond to 2 percent, with a tolerance of plus or minus 1 percentage point. This objective corresponded to the so-called underlying rate of inflation when the target was announced. In 1993 and in 1994 as well, monetary policy aimed at preventing the inflationary impulse (which was deemed unavoidable) due to a large depreciation of the krona and changes in indirect taxes from causing a persistent increase in the underlying rate of inflation. The experience of the first years of inflation targeting in connection with the most recent amendments to the 1988 Riksbank Act, which came into force on January 1, 1999, and prescribe an explicit objective for monetary policy, gave reasons to clarify the formulation of monetary policy.

The principles on which monetary policy decisions in Sweden are based can be formulated as a simple rule of thumb.2 If the inflation forecast, based on an unchanged rate of interest on repurchase agreements (repos), is in line with the target at the appropriate time horizon, the monetary stance is appropriate. If the forecast is above (below) the inflation target, the monetary stance is too expansionary (restrictive), and the repo rate should be raised (lowered) immediately or in the near future. As this rule of thumb refers to an inflation forecast that assumes the instrumental rate (the repo rate) is unchanged, it is natural for the Riksbank to present its forecasts accordingly.

Each forecasting round at the Riksbank culminates in a main scenario that is described in its quarterly Inflation Report.3 It should be stressed that the main scenario is viewed as the most likely outcome under the assumption that the repo rate is held constant over the forecast horizon. The assumption of an unchanged repo rate is made primarily for presentational reasons, to show whether or not the repo rate needs to be changed to bring inflation in line with the target.

The statistical measure that best corresponds to the forecast in the main scenario is the mode (Figure 1), since it is the most likely outcome in the distribution (or rather, the value that corresponds to the maximum of the density function). However, monetary policy is not guided by the most likely outcome only. An assessment of the risk spectrum is also important, and in practice the mean forecast of future inflation is therefore taken into consideration when deciding on the appropriate monetary policy stance.4 In recent inflation reports, confidence intervals for the forecasts have been published. The executive board of the Riksbank may take the properties of the whole distribution into account when setting the repo rate. This implies that monetary policy can be described as being guided by “distribution forecast” targeting.5

Uncertainty analysis is based on two types of assessments for each factor that is deemed to affect inflation. First, an assessment is made as to whether or not the uncertainty in the forecast related to each factor is greater or less than that historically associated with the factor in question. Second, an assessment is made as to whether the probability of outcomes above the main scenario exceeds the probability of outcomes below (that is, whether the distribution of outcomes is normal). The resulting distributions are then weighed together to arrive at an inflation-asymmetric estimate of risk. For each factor these assessments are then summarized in a two-part forecast distribution, with weights that reflect each factor’s relative importance for future inflation.

The inflation forecasts from the main scenario that are published in the Inflation Report (since the second quarter of 1998) are presented with uncertainty bands derived using the inflation forecast distributions just described (Figure 2). The bands are constructed such that the probability of outcomes below the lower band equals that of outcomes above the upper band.

Since the inflation target came into force at the beginning of 1995, the annual increase in consumer prices has averaged 1.1 percent. This average outcome is below the targeted figure but within the tolerance interval. Over the same period, the average underlying rate of inflation has been somewhat higher: 1.7 percent in terms of the UND1X (the CPI excluding interest expenditure and the direct effects of indirect taxes and subsidies) and 2.3 percent in terms of the UNDINHX (which, in addition, excludes goods that are mainly imported; Figure 3). This shows that, during these four years, transitory effects on inflation have been stronger overall on the downside than on the upside.

When the Swedish inflation target was clarified in 1999, it was modified in two respects. The first concerns situations when CPI inflation in the relevant time horizon is being affected by specific factors that are judged to have no substantial permanent impact on inflation or the inflation process. For example, a repo rate adjustment, up or down, affects house mortgage interest expenditure, which is a sizable component of the CPI, but clearly this is not an effect on the CPI that the Riksbank ought to counter. Monetary policy effects of indirect taxes and subsidies can be analyzed in a similar way. When policy is formulated in these situations, there may be grounds for explaining in advance that a deviation from the CPI target is warranted.

The second modification in the formulation of the inflation target relates to circumstances in which inflation for some reason has deviated markedly from the target.6 Experience in Sweden as well as studies across countries suggest that the lag before monetary policy elicits its main effect is one to two years. This horizon for the main effect of monetary policy implies that policy should be guided by inflation forecasts five to eight quarters ahead. The target horizon, however, is not necessarily the same as the horizon for the main effect of monetary policy. Normally it is, but in the event of a sizable deviation from the target, there are always grounds for weighing the benefits of a rapid return to the target against the consequences for the real economy.7

The amendments to the Riksbank Act that came into force on January 1, 1999, were designed to give the Swedish central bank greater independence from political influence, establish a primary objective for monetary policy (namely, price stability), and ensure the Riksbank’s accountability for achievement of its policy objective.8

Because monetary policy cannot control future inflation with absolute precision, inflation will fluctuate around the targeted rate. There are several grounds for setting a tolerance interval for these fluctuations. One is that it may be useful in the assessment of monetary policy by the body to which the central bank is accountable.

Two recent measures aim at clarifying the role of the tolerance band. First, after the new central bank legislation went into force, the assessment of monetary policy by the Riksdag (the national legislature) was clarified. In this context, the tolerance interval will have an operational function. The Riksbank has announced that whenever CPI inflation is outside the tolerance interval, it will present an explanation for why this has occurred. This clarification, suggested by Heikensten and Vredin (1998), was inspired by the rule requiring the Bank of England, as soon as inflation strays outside a specified interval, to write an open letter explaining why inflation is not on target. Second, to highlight the statistical uncertainties in the inflation forecasts, since mid-1998 the Inflation Report has included a table showing the probabilities of inflation falling within the tolerance interval 12 and 24 months out, assuming an unchanged stance of monetary policy.

Evaluation of monetary policy decisions requires knowledge of the analysis and discussion that preceded them. One way to facilitate effective monitoring of the central bank is to publish the minutes of the decision-making body. The executive board of the Riksbank has decided to hold monetary policy meetings 8 to 10 times a year, and the minutes are published with a lag of two to four weeks.

The implementation and communication of monetary policy since 1993 can be divided into three phases. In the first phase, 1993-95, the inflation targeting strategy was announced and established. During the first two years of this period, the objective was to prevent the underlying rate of inflation from increasing. Regular (thrice-yearly) publication of a report on inflation and inflation expectations in Sweden began during this period. During this phase, bond investors’ long-term (five years) inflation expectations fell from above 4 percent to 3 percent, that is, to the upper bound of the tolerance interval. During this period, however, the Riksbank did not publish inflation forecasts. The risks for future inflation were stated in the reports in a more general way.

In the second phase, 1996-97, inflation forecast targeting was introduced. The Riksbank’s own inflation forecasts were given more weight in the communication of monetary policy. Forecasts of future inflation were gradually introduced in the reports, whose name was changed to Inflation Report. During this phase, bond investors’ five-year inflation expectations fell from 3 percent to around 2½ percent by the end of 1997 (Figure 4), implying that the inflation target was gaining credibility.

In the third phase, from 1998 onward, “distribution forecast targeting” was introduced, and explicit paths for future inflation were published, surrounded by confidence intervals. Long-term inflation expectations during this period were slightly below 2 percent (Table 1), signaling the credibility of the inflation targeting strategy.

Impact on the Economy

The Riksbank’s view on the exchange rate has altered in some respects since 1992. Gradually more emphasis has been placed on the krona’s forecast path, and occasional fluctuations have been played down. A simple analysis shows that the confidence of market agents in Swedish economic policy, measured as the difference between Swedish and German long-term interest rates, can explain almost a third of Sweden’s nominal exchange rate variability since 1992 (Figure 6). In the period from 1994 to 1996, the swings in credibility, measured in this way, explain almost two-thirds of the movement in the exchange rate.

In the period since 1996, the exchange rate has been comparatively stable except during the widespread turbulence in connection with the international financial crisis in the autumn of 1998. However, even with relatively strong government finances and low inflation, a flexible exchange rate does seem to entail exchange rate fluctuations that are greater than was expected when the krona fell in the autumn of 1992. This experience is shared with other countries that use inflation targeting and may not be related to credibility problems regarding economic policy in Sweden, as is evident from bond market developments. Although the long-term interest rate differential with Germany increased somewhat during the financial turmoil in 1998, it stayed quite small (below 1 percentage point) compared with its levels at the beginning of the floating exchange rate regime.

The views expressed here are solely the responsibility of the author and should not be interpreted as reflecting the views of the Executive Board of Sveriges Riksbank.

This section is based on Blix and Sellin (1998). See, for example, the Inflation Report for the fourth quarter of 1998 for a discussion of the framework for the forecast.

Focusing on the mean forecast also facilitates the use of econometric models, which normally produce forecasts of the mean.

Svensson (1999) shows that nonlinearity and uncertainty about the model both imply that certainty- equivalence does not apply. This means it is not optimal to use conditional mean forecasts as intermediate variables. Therefore he suggests that conditional probability distributions of the target variables be used rather than only the means. In practice, this form of distribution targeting is implemented in an elementary way, as the Riksbank staff construct paths for inflation and the output gap, given various interest rate paths, which are presented to the executive board.

See Heikensten and Vredin (1998) for a discussion of flexible inflation targeting.

Sweden: Inflation as Measured by the CPI and Inflation Projections 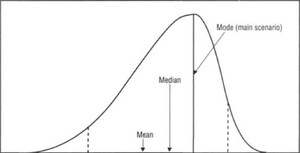 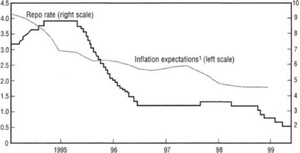 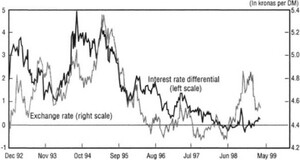