Privatization is a reform area where the World Bank has the lead role. The privatization component of IMF-supported programs has often drawn from and supported the strategy and measures contained in World Bank-supported reform packages. IMF conditionally has reinforced public enterprise reforms, including privatization, planned under the aegis of the World Bank, where these reforms are important to the objectives of the program (Bredenkamp and Schadler, 1999). IMF staff have relied on World Bank expertise for evaluating the appropriateness and feasibility of the measures and timetables, as well as for monitoring the implementation of specific measures.

Privatization is a reform area where the World Bank has the lead role. The privatization component of IMF-supported programs has often drawn from and supported the strategy and measures contained in World Bank-supported reform packages. IMF conditionally has reinforced public enterprise reforms, including privatization, planned under the aegis of the World Bank, where these reforms are important to the objectives of the program (Bredenkamp and Schadler, 1999). IMF staff have relied on World Bank expertise for evaluating the appropriateness and feasibility of the measures and timetables, as well as for monitoring the implementation of specific measures.

Reflecting the significant burden that public enterprises have frequently imposed on the budget and the economy, IMF-supported programs have placed growing emphasis on privatization (World Bank, 1995, and Bredenkamp and Schadler, 1999). This trend has followed from the lack of success in hardening the budget constraint of public enterprises in a number of developing and transition countries and the modest results of attempts at restructuring large enterprises and improving their operational efficiency, including through performance contracts. As a result, there has been a growing recognition that privatization may be the only way to sever inappropriate financial links between public enterprises and the government. In addition, privatization has been a key element of structural change in IMF-supported programs with countries in transition from a centrally planned to a market-driven economy.

This section examines aspects of the privatization component of IMF-supported programs approved during the period 1994–98 through a review of the case study countries, as well as the IMF’s MONA database.34 The study will be limited to programs under the SBA, EFF, SAF, and ESAF approved by the Executive Board during 1994–98.

The incorporation of privatization and privatization-related measures in IMF-supported programs has been flexible. This has reflected the underlying diversity of approaches across countries in the design of divestiture programs and supporting measures.

The widespread conditionality on privatization targets reflects the fundamental objective that privatization should actually take place and the often substantial drain of public enterprises on the economy and the budget. Moreover, privatization targets are more specific and more readily monitored than other aspects of the divestiture process. The need to observe announced deadlines for specific privatizations when structural performance criteria or prior actions are attached to the actual sales has the merit of emphasizing the importance attached to the sales in the program. However, this can also undermine the government’s negotiating position in these operations vis-à-vis potential buyers. To guard against such an eventuality, some programs attach conditionality to the bringing of public enterprises to the point of sale, or to particular elements of the process short of final sale. In such cases, it is important to ensure, in consultation with the World Bank, that any reservation prices set by the authorities are realistic and, if possible, supported by independent valuations.

Privatization conditionality in IMF-supported programs should continue to reinforce the divestiture strategies supported by the World Bank. Within the framework of Bank-IMF collaboration, the IMF should focus on those aspects of policies—the relationship between privatization and macroeconomic policies—that are in its area of responsibility. In this regard, IMF staff should help guide reform priorities on the basis of the financial impact of public enterprises, as well as monitor budget constraints.36

There is room for somewhat greater selectivity in the use of structural performance criteria, prior actions, and structural benchmarks to strengthen their contribution to the success of reform. The focus, while supportive of World Bank privatization strategies, should be on privatization measures that have a significant fiscal and macroeconomic impact and that are deemed critical to the achievement of the objectives of the financial program.

The World Bank’s last formal review of its assistance to privatization in developing countries emphasized the importance of focusing on the entire privatization process, rather than mainly on the number of privatized enterprises. World Bank conditionality for tranche release has subsequently been linked more strongly to the process aspects of privatization, as well as to setting up appropriate legal frameworks and regulatory institutions for the post-privatization period.

There is scope for IMF conditionality to selectively reinforce this emphasis on process and regulation where measures in these areas are considered central to the financial program.37 This might include consideration of institutional processes; operational mechanisms for asset sales; legal and procedural changes; and the establishment of regulatory frameworks within which privatized firms, especially utilities, will operate. An increased emphasison process and regulation should also seek to enhance transparency and promote good governance in privatization procedures.

Conditionality on actual privatization will often remain important. This might, in some cases, be better placed in the form of structural benchmarks rather than structural performance criteria and prior actions to limit adverse bargaining incentives. Qualitative assessments, with input from the World Bank, would then be required where there are delays in specific privatizations.

The determination of fiscal performance criteria should reflect the macroeconomic impact of privatization proceeds and their use. From the viewpoint of fiscal control and transparency, it is important to include as broad a definition of privatization receipts as possible in the fiscal targets and quantitative performance criteria established in the program. In particular, programs should give due consideration to the extrabudgetary activities that may be associated with privatization, and these should be consolidated in the fiscal accounts. Moreover, privatization receipts should be classified as financing in the fiscal programs included in IMF arrangements. The design of programs should also take into account the expected sources of the privatization proceeds and the degree of capital mobility, particularly if the privatization program is large relative to income and monetary aggregates. As these issues were discussed substantially in Sections II and III, this section focuses on the more specific issue of the combinations of fiscal performance criteria and automatic adjusters that indicate how fiscal ceilings should change when, as commonly occurs, privatization receipts deviate from programmed levels.

Programs differed somewhat more in their treatment of shortfalls in privatization receipts relative to the program baseline. In some programs, such shortfalls implied the need for fiscal adjustment (Argentina, Bolivia, Hungary, Kazakhstan (1996–97), Mongolia, Mozambique, and the Philippines), while in others privatization shortfalls could be financed, though usually up to certain caps (Côte d’Ivoire, Kazakhstan (since 1998), Peru, Russia, and Ukraine).39

The need to save excess privatization receipts, seen frequently in programs, is based on the principle that the fiscal program has been designed with certain macroeconomic objectives in mind and that additional nonrecurrent financial resources should be used in a manner consistent with those objectives, which typically would entail saving them. This approach is generally consistent with the discussion in Section III of the likely impact of spending additional privatization receipts on government net worth and aggregate demand.

Choices regarding program design in the presence of projected privatization receipts should be made on the basis of the fiscal and macroeconomic circumstances of the country, the objectives of the program, and the availability and timeliness of data. Judgments about types of risks to the program should also influence choices. Particular care needs to be exercised to ensure consistency between fiscal and other performance criteria. For instance, if the government must save excess privatization receipts—to the extent that this is achieved through additional deposits at the central bank—net international reserves and net domestic assets of the central bank should also have privatization-related adjusters. Otherwise, government deposits of the excess receipts with the central bank would create room for credit to the private sector to expand beyond the original program targets. 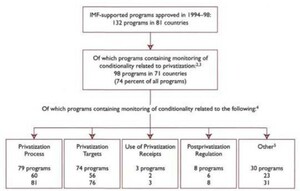