Equity considerations are playing an increasingly important role in the operational work of the IMF. According to Fischer (1999), this is because “we accept the view that poverty in the midst of plenty is not socially acceptable,” and because equitable adjustment programs are more likely to be sustainable. In the case of the Philippines, the importance of equity considerations is heightened by the persistence of significant poverty, in part a consequence of the weak and uneven growth performance discussed in Section II.

Equity considerations are playing an increasingly important role in the operational work of the IMF. According to Fischer (1999), this is because “we accept the view that poverty in the midst of plenty is not socially acceptable,” and because equitable adjustment programs are more likely to be sustainable. In the case of the Philippines, the importance of equity considerations is heightened by the persistence of significant poverty, in part a consequence of the weak and uneven growth performance discussed in Section II.

This section presents key trends in equity in the Philippines and evidence on how growth and economic policies have influenced these trends.1 Highlights include measures of poverty incidence, measures of income distribution, human development, and governance to arrive at a broad view of trends in equity. Economic policies are also discussed, with evidence on the impact of economic growth on equity, as well as specific economic policies that can have an impact on equity (in particular, fiscal policies, external sector policies, and policies toward the agricultural sector).

The main conclusion of the section is that while continued economic growth is a sine qua non for gains in equity, more targeted interventions may be needed, particularly in rural areas. The conclusion that growth helps equity is based on consideration of the cross-country evidence as well as an analysis of time-series and cross-regional data for the Philippines. However, this analysis also reveals that growth by itself may not be sufficient to achieve the desired reduction in poverty, particularly in rural areas.

Indicators of poverty have shown a decline since 1985, but remain high in absolute terms, particularly in rural areas (Table 8.1.).

The aggregate figures on poverty incidence conceal a great deal of spatial variation. The National Capital Region (Metro Manila) has consistently had the lowest incidence of poverty—7 percent in 1997—and subsistence incidence (less than 1 percent); outside of the capital region, the poverty incidence ranged from 17 percent to 59 percent (Figure 8.1, top panel). As might be expected, there is a strong positive correlation between the incidence of poverty in a region and the share of families in the region that are rural (Figure 8.1, bottom panel).

Income inequality has not changed much over the past two decades, and over the most recent period (1994–1997), inequality has actually increased slightly (Figure 8.2). Over the past two decades, the richest 20 percent of the population has received a little over one-half the country’s total income, whereas the poorest 20 percent has received about 5 percent. Understanding the reasons for the recent increase in income inequality requires an analysis of the detailed “raw” data underlying the Family Income and Expenditure Survey (which were only released recently).

Recent advances in equity research (See (1999)) have emphasized that poverty should be seen as the deprivation of basic capabilities. Premature mortality, significant undernourishment, and widespread illiteracy are examples of deprivations that directly impoverish human life. Hence, the allocation of economic resources as well as arrangements for social provision must give some priority to removing these disadvantages.

A variety of indices have been developed by the United Nations Development Program (UNDP) to measure differences across countries in the degree of human development and material well-being; the Philippines tends to be placed in the middle of the group of developing countries, roughly consistent with its per capita income.

Corruption is inequitable. The benefits from corruption tend to accrue to the better-connected individuals in society, who belong mostly to the high-income groups (Tanzi (1995)). Recent work by IMF staff (Gupta, Davoodi, and Alonso-Terme (1998)) demonstrates that high and rising corruption increases income equality and poverty by (1) reducing economic growth; (2) lowering the progressivity of the tax system; (3) reducing the effectiveness of social spending and the formation of human capital; and (4) perpetuating an unequal distribution of asset ownership and unequal access to education. An important implication of these results is that policies that reduce corruption will also reduce income inequality and poverty.

Cross-country surveys of perceptions of corruption place the Philippines in the middle of the group of emerging market economies. Transparency International’s Corruption Perceptions Index measures the level of corruption as perceived by business people, risk analysts, investigative journalists, and the general public. The index focuses on corruption in the public sector and defines corruption as the abuse of public office for private gain. In 1998, the Philippines ranked 55th out of 85 countries for which the index was computed.2

Impact of Growth and Economic Policies on Equity

The relative efficacy of growth-oriented and re-distributive policies in promoting equity continues to be a matter of discussion and debate. Countries adopt different strategies to promote equity. Some focus on redistributive policies, for example, by actively promoting the use of public resources to raise the share of income going to the bottom tier of the distribution or by imposing highly progressive taxes to reduce the share going to the top tier. Some of the support for redistributive policies is based on the belief that growth has an adverse effect on equity in the early stages of development (the so-called “Kuznets curve”). Other countries rely largely on growth to help low-income families, without emphasis on redistribution.

Recent cross-country empirical evidence provides little support for the view that growth is detrimental to equity (Summers (1999)); the Philippines, however, appears to be an exception.

In contrast, analysis of Philippine time-series data on poverty incidence points to the importance of growth in improving equity. One way to measure the relative importance of redistributive policies and growth-oriented policies is by performing some counterfactual experiments using the adjusted poverty incidence measure discussed earlier. In particular, the poverty measure can be decomposed into two components:

Decomposition of Poverty Incidence into Growth and Redistribution Components

Decomposition of Poverty Incidence into Growth and Redistribution Components

Philippine regional data also support the view that growth contributes to a reduction in poverty incidence, but the effect is weak in rural areas.

Source: Author’s calculations.Notes: (a) the variables are specified in growth rates; hence, the estimated coefficients can be interpreted as elasticities; and (b) numbers reported in parentheses are standard errors.
Table 8.3.

Source: Author’s calculations.Notes: (a) the variables are specified in growth rates; hence, the estimated coefficients can be interpreted as elasticities; and (b) numbers reported in parentheses are standard errors.

These results suggest that while growth can be expected to alleviate poverty, it may not be sufficient (as indicated by the relatively low R 2 of the regressions). The remainder of the discussion in this section focuses, therefore, on other economic policies that could have an impact on equity (in particular, policies toward the agricultural sector, fiscal policies, and external sector policies).

Fiscal policies can contribute to improvements in equity. The main ingredients of equitable fiscal policy are (1) implementation of a fair and efficient system of taxation—ideally a system of easily administered taxes, moderate tax rates, and minimum number of exemptions; and (2) provision of adequate social expenditures, particularly on education and health, to increase equality of opportunity.

In the Philippines, the Comprehensive Tax Reform Program and expansion of the VAT are likely to increase the contribution of the tax system to equity. While there is little evidence to date of the effects on these tax changes on equity, they are likely to improve equity for the following reasons:

In addition, better tax administration can be expected to improve equity by ensuring sufficient revenues for critical social expenditures, and providing a more transparent and uniform treatment of taxpayers.

Spending on health and nutrition is relatively low in the Philippines by ASEAN standards, biased toward personal health care (rather than preventive care interventions), and inefficient in its interregional allocation of resources.

In principle, realistic exchange rates and an outward-oriented trade policy are presumed to be consistent with growth, reduced poverty, and improved equity in the medium to long run. Evidence from a recent cross-country study by Sarel (1997) finds partial support for this view. He finds that real exchange rate overvaluation leads to a more unequal income distribution, especially in poorer countries. He concludes that the government should try at least not to contribute to such overvaluation, and be prepared to take corrective measures when such overvaluation occurs. Sarel does not find any link between openness to international trade and changes in the income distribution.

In the Philippines, exchange and trade policies historically have contributed to inequity through a number of channels; changes in many of these policies during the 1990s should have a favorable impact on equity, at least in the medium to long run.

The shift toward outward-oriented policies and market determination of exchange rates should, in principle, contribute to a increase in equity; however, there is as yet little reliable evidence on this issue.

Sustained growth, combined with targeted interventions in some areas, are required to make further gains in equity in the Philippines. Poverty rates remain high, particularly in the rural areas, and the income distribution is highly unequal. While poverty is responsive to growth, attaining the government’s targets for poverty alleviation (poverty incidence of 25–28 percent by 2004) is likely to require targeted interventions in the rural areas, as well as equitable fiscal and external sector policies.

Coronel (1998) presents nine case studies of the nature and extent of corruption in the Philippines, and the steps being taken to combat it.

In general, the amount of budget spending devoted to agriculture is quite moderate (1–2 percent of GNP in recent years). However, agriculture is supported through substantial tax privileges and by the National Food Authority (which regulates the rice market and protects domestic farmers from being undercut by cheaper imports). 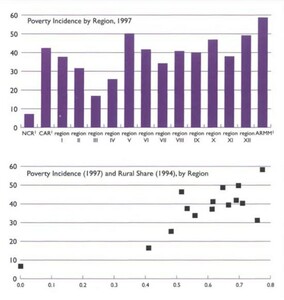 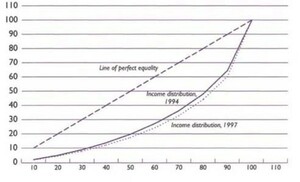 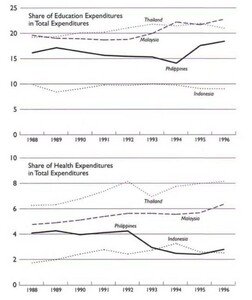 Source: Author’s calculations.Notes: (a) the variables are specified in growth rates; hence, the estimated coefficients can be interpreted as elasticities; and (b) numbers reported in parentheses are standard errors.