Disinflation occurred while output was collapsing, and was often followed by large deteriorations in the external current account balance. This section discusses the links between these developments.

Disinflation occurred while output was collapsing, and was often followed by large deteriorations in the external current account balance. This section discusses the links between these developments.

The sharp output drop that accompanied some of the early disinflations led some commentators to voice concerns about the additional output costs that could be associated with fast disinflation (1992; Calvo and Coricelli, Portes, 1993; Amsden, Kochanowicz, and Taylor, 1994; and Fedorov, 1995). Other commentators, however, have subsequently noted that, as inflation stabilized, growth resumed, often within two years (Figure 1), thus suggesting that disinflation was a condition for sustainable growth (1996; Fischer, Sahay, and Vegh, and De Melo, Denizer, and Gelb, 1997).7 These two views are not, of course, inconsistent—the former focusing on the transitory costs of disinflation, the latter on the long-term relationship between inflation and growth—and they underscore the complications in assessing the relationship between inflation and growth from simple indicators. These complications are particularly apparent in a period of deep structural changes affecting potential output: the drop in output may have been due to the collapse of central planning, rather than to disinflation, while the recovery may have been due to the effect of structural change, rather than to the stabilized inflation environment. Only a few studies conduct formal tests of the relationship between inflation and growth for transition economies and they draw somewhat divergent conclusions. Lougani and Sheets (1997) find that, controlling for progress with transition reform (as well as other variables), output growth is negatively affected by inflation: a country with 500 percent inflation in one year loses about 2 percentage points of GDP the following year and 4 percentage points of GDP in the longer run. This finding is echoed by Berg and others (1998) who find different effects of inflation on the private and public sectors: whereas doubling inflation is associated with a decline of 5–15 percent in private sector output, it is associated with increased state sector output by about half that magnitude. They suggest that the latter arises because subsidies to state-owned firms boost their output, but also stoke inflation by raising the fiscal deficit. Thus, they conclude that the impact of inflation on output depends on the relative shares of the private and public sectors. Aslund, Boone, and Johnson (1996) find no significant role for inflation in determining output once both war-torn and ruble-zone dummies are included.

These studies, however, share two main shortcomings. First, they do not investigate whether the relation between inflation and growth may vary at different inflation levels—though there is increasing evidence of this pattern for nontransition economies. Second, they shed no light on the output costs of disinflation, namely whether the change in inflation, rather than the level of inflation, has implications for output. In background work for this paper, Christoffersen and Doyle (1998) address these issues, using panel data on 22 of the 25 transition countries reviewed here (see Appendix I). They find evidence of an inflation threshold for transition economies at about 13 percent: inflation above that level reduces output growth, while no significant effect on growth is apparent if inflation is below that level. They also find no evidence of generalized output loss owing to disinflation.

It is notable that the inflation threshold appears to be higher than that found in market economies (see Appendix I). This suggests that the threshold may be falling in transition time, implying that the threshold is lower for the advanced reformers than for the panel as a whole. More specifically, Christoffersen and Doyle (Chapter IV, p. 29) note that inflation may have played a role in facilitating the large growth-enhancing relative price changes at the outset of transition, offsetting other negative effects of inflation on growth. But with structural reforms and the largest of the initial relative price adjustments completed, these initial benefits from inflation would decline, and the relationship between inflation and output in transition economies would come to resemble that of long-established market economies more closely. Thus, the net benefits from low inflation may increase as transition deepens.

In summary, there is evidence that low inflation boosts growth, even after controlling for structural reform and for an inflation threshold that may fall over time as structural reform proceeds. Such a decline in the threshold would be consistent with findings in Fischer, Sahay, and Vegh (1996) and Cottarelli, Griffiths, and Moghadam (1998) that fast reformers have, ceteris paribus, lower inflation rates. No clear evidence of a high output cost of disinflation has been found.

Cukierman (1992) notes that one of the motives for inflation is the perceived risk that disinflation may pose for the external current account. An exchange rate based disinflation may lead to a real appreciation and, thus, affect competitiveness; and competitiveness may also deteriorate in the context of a floating exchange regime if the nominal exchange rate overshoots (Dornbusch, 1976). Indeed, concerns about the possible impact of tighter monetary policies on the external current account have been mentioned by some country authorities (for example, in Hungary) as one of the reasons why accelerating disinflation through a tighter exchange rate policy or the shift to a float was regarded as excessively risky (Suranyi and Vincze, 1998).

External current account deficits relative to GDP have increased significantly during the 1990s in both the Central and Eastern European countries and the Baltics, Russia, and other countries of the former Soviet Union. In the early 1990s, the median balance in both was close to zero, while in 1997, it was a deficit in excess of 5 percent of GDP.

Recasting the current account data in inflation stabilization time highlights possible links between these trends and disinflation. The top panel of Figure 2 shows that inflation stabilization was accompanied by a weakening of the external accounts: the external balance declined sharply after disinflation in the Central and Eastern European countries, recovering somewhat in the third year. The Baltics, Russia, and other countries of the former Soviet Union exhibit a smoother decline, of similar magnitude.

Evidence of a widening of the external accounts, however, should not necessarily be taken as a proof that stabilization was accompanied by a shift to an unsustainable external position. As noted above, stabilization is a precondition for growth and a recovery of investment. In transition economies, such an acceleration of investment should be expected to be financed partially from abroad, through FDI and other long-term capital inflows. In turn, these inflows are likely to increase in stabilized macroeconomic conditions. Thus, the observed weakening of the external account after the stabilization may, at least in part, reflect the recovery of growth and investment, rather than an unsustainable loss of competitiveness. In this respect, it is useful to note that the external current account net of FDI in stabilization time shows stronger trends (bottom panel of Figure 2): the debt-financed external balance weakens markedly in the Central and Eastern European countries in the first two years, while in the Baltics, Russia, and other countries of the former Soviet Union, the initial weakening is less marked. But by the third year, the balance has strengthened considerably due to the strong inflow of FDI.

The Baltics, Russia, and Other Countries of the Former Soviet Union and Central and Eastern Europe—GDP Growth, Inflation, and Transition Index

(In chronological and disinflation time) 1

The Baltics, Russia, and Other Countries of the Former Soviet Union and Central and Eastern Europe—-Current Account Balance, in Percent of GDP, 1990–97 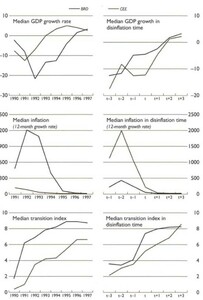 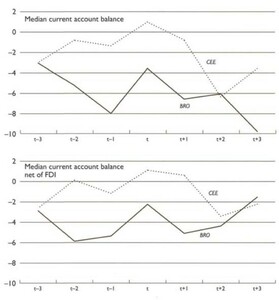