The Asian crisis plunged the countries affected into deep recessions. As of October 1998, real GDP was estimated to decline in 1998 by 7 percent in Korea, 8 percent in Thailand, and 15 percent in Indonesia.1 The slowdown in economic activity was dramatically different from that assumed in formulating the programs, and its magnitude, once appreciated, prompted revisions in economic policies.

The Asian crisis plunged the countries affected into deep recessions. As of October 1998, real GDP was estimated to decline in 1998 by 7 percent in Korea, 8 percent in Thailand, and 15 percent in Indonesia.1 The slowdown in economic activity was dramatically different from that assumed in formulating the programs, and its magnitude, once appreciated, prompted revisions in economic policies.

Corresponding to the economic slump were massive corrections in external current accounts. The corrections were especially large in Korea (with a current account adjustment of 15 percentage points of GDP) and Thailand (12 percentage points), but even in Indonesia it is expected to be substantial (over 4 percentage points). The slump was, to a large extent, forced on these economies by the withdrawal of foreign capital and flight of domestic capital: the reversal of capital flows necessitated large current account adjustments that were then brought about by huge currency depreciations and precipitous drops in domestic demand, especially fixed investment. The ability of depreciations to stimulate exports may have been limited due to concurrent depreciations in several countries in the region and deteriorating economic prospects in some major trading partners, including Japan.2 At the same time, given the unhedged exposures of domestic firms and financial institutions, the depreciations had devastating balance sheet effects that, along with worsening consumer and business confidence, were a major reason for collapses in domestic demand.

The IMF, like most observers, misread the extent of the recession. This was largely a reflection of the fact that, as in all IMF-supported programs, macroeconomic projections were predicated on the success of the programs, including the restoration of confidence. Moreover, the IMF and the authorities appear to have erred on the side of optimism in part because of concerns that realistically pessimistic forecasts would have exacerbated the situation further—but the resulting large revisions in projections were detrimental to credibility.

This section first discusses the nature of the economic slowdown and the reasons for its severity. It draws, in part, on analysis in other studies, including the October 1998 World Economic Outlook (International Monetary Fund, 1998). It then considers why the initial program projections were so far off the mark.

Output Decline and Its Causes

In all three countries, the output decline was associated with a collapse in domestic demand, while net external demand expanded (Figure 5.1). Domestic expenditure declined in 1998 by much more than the decline in GDP: by 25 percent in Korea, 18 percent in Thailand, and 17 percent in Indonesia. This divergence corresponded to the large adjustments in external current accounts that took place. In Indonesia, the decline in domestic demand was much closer to that in output, reflected in a proportionately smaller current account adjustment.

In all three countries, the central reason for the decline in domestic demand was a precipitous drop in investment expenditure (Figure 5.2). Gross fixed investment fell by more than one-fourth in Korea and Thailand, and by more than half in Indonesia. Weakness in investment is not an unprecedented occurrence in IMF-supported programs,3 but in the Asian crisis countries it appears to have been exacerbated by several factors. Of particular importance was the effect of exchange rate depreciations on balance sheets with large unhedged foreign currency liabilities. In addition, investment was battered by the reversal of foreign financing flows and widening of risk premiums, as well as preexisting financial sector weaknesses and the collapse of asset prices. Many corporations (particularly in Korea) were also burdened by excess capacity built up during the preceding investment boom and were in weak financial circumstances (especially as it was nearly impossible for lenders to discriminate between reversible cyclical difficulties and fundamental problems). Moreover, banks facing mounting bad loan problems and low capital-asset ratios were ill-placed to lend. The impact of monetary policy, another factor affecting investment, will be assessed in the next section.4

Private consumption also fell substantially in all three countries: in Korea and Thailand, it fell much more than current income. The rise in savings rates partly reflected wealth effects (corresponding to the balance sheet effects discussed in the previous paragraph) as well as declining confidence. In Indonesia, however, the drop in private consumption was more or less in line with the (large) decline in income. The behavior of consumption, contrasting with the usual tendency toward consumption smoothing that would lead one to expect a less-than-proportional decline in consumption as output declines, may reflect a combination of liquidity constraints, precautionary saving in the face of increased uncertainty, and expectations of a prolonged slump.

Export volumes increased substantially, although values in U.S. dollar terms were reduced by the lowering of dollar export prices. The growth of export volumes was dampened by further shocks to external demand, notably associated with the slowing of economic activity in Japan. Import volumes also declined sharply, as did their value in U.S. dollar terms. The result was that the external sector provided some net support for economic activity in all three countries (Figure 5.3), and the external current accounts underwent major adjustments.

Supply shocks may also have played a role in the output decline. Aggregate supply may have decreased, in particular, owing to the disruption to production associated with widespread bankruptcies and shifts in the allocation of credit. Moreover, in all three countries, capital has been destroyed by the widespread bankruptcies and large relative price changes associated with crisis, commercial relationships fractured, and “trust” undermined. In Indonesia, civil unrest together with the drought and forest fires likely had a significant negative impact on aggregate supply. However, the fact that export volumes did increase substantially in all three countries suggests that demand-side factors may have played the dominant role in the output decline.

The depth of the slowdown was not foreseen in the initial program projections, and growth projections in particular were revised sharply and successively downward during the course of the programs (Figure 5.4). At the same time, improvements in external current accounts were larger and more rapid than had initially been projected (Figure 5.5). Why were the initial projections so far off the mark?

First, the program projections for growth were somewhat more optimistic than the consensus at the time. A comparison of program and consensus forecasts5 shown in Figure 5.6 indicates that the IMF's projections somewhat lagged the consensus in recognizing the severity of the downturn, although they did not differ systematically by large amounts. The fact that the IMF's projections were close to the consensus is not very reassuring, however, as the IMF should in principle have been able to anticipate events better than outside observers. To some extent, optimistic projections appear to have reflected the need to agree with the authorities on a common set of growth assumptions together with the desire to avoid undermining confidence further. However, this may have been counterproductive as the failure of the optimistic projections to be realized may itself have undermined confidence in the program.

It is also important to note that program projections are not intended to be unconditional forecasts of economic events. Rather, they are predicated on the successful implementation of the program. The programs were based on a scenario in which confidence was restored and the adverse consequences for growth were therefore contained—but this was only one possible outcome when the programs were formulated and not the one that materialized.

Another noteworthy feature of the projections is that the projections of both the IMF and outsiders were revised progressively downward by very large amounts: very few economists foresaw how deep the slumps would be. To a large extent, the revisions reflected the fact that the magnitude of private capital outflows and the resulting exchange rate depreciations could be factored into the projections only as the crisis unfolded, partly because they reflected expectations that were self-fulfilling. Some external shocks, such as the further weakening of the Japanese economy, were also not foreseen in advance.

The impression remains, however, that both the IMF and outsiders erred in some ways that could have been avoided at the time. For one thing, the channels of economic interaction among the countries in the region, including both trade and financial sectors, may not have been adequately taken into account when the programs were formulated. Moreover, the experience of Mexico, where growth declined from 4 percent in 1994 to -6 percent in 1995, might have led one to predict a much sharper slowdown in growth than was initially projected in the Asian crisis countries.6

Inflation, while it initially exceeded program expectations, at least in Korea and Thailand, turned out closer to target than would have been expected given the exchange rate outturns (Figure 5.7). This lower-than-expected pass-through reflects, in part, a decline in import unit values associated with a sharp decline in dollar import prices, and possibly overestimates of the weight of imports in the general price index. Pricing behavior may have reflected weak demand and firms' perceptions that the exchange rate depreciations were temporary. Labor market reactions in the face of growing output gaps were also particularly conducive to price stability: in Korea, in particular, nominal wages actually declined. By mid-1998, inflation was clearly under control in both Korea and Thailand, while it proved more persistent in Indonesia.

Figures here, and below, refer to projections for the fourth reviews of the Korean and Thai programs and the second (Extended Fund Facility) review for Indonesia.

For example, Korea's exports to Japan during the first three quarters of 1998 declined by 20 percent (in U.S. dollar terms) compared with the same period in 1997. Korean exports to other Asian countries contracted similarly, whereas those to the European Union and the United States grew strongly. In Thailand, a broadly similar pattern of export developments was observed in the first half of 1998.

Changes in stock building were another important factor in the countries, although measurement problems impede their interpretation. In Korea, in particular, a sharp drop in inventories, largely associated with exports of existing stocks, accounted for a significant portion of export growth in the first half of 1998.

Consensus Forecasts publishes projections for GDP growth and other macroeconomic variables of about a dozen institutions. It appears around the middle of each month.

The lessons from a wider range of countries are more mixed, however. For example, in a sample of IMF member countries experiencing large exchange rate depreciations of 25 percent or more during 1975—96, the median slowdown in economic growth is only 0.6 percentage point. For countries in this sample whose GDP growth rates prior to the crisis were over 5 percent, the median slowdown is over 4 percentage points—nothing like that which has occurred in the Asian crisis countries.

Consensus Forecasts and Program Forecasts of Real GDP Growth in 1998

(In percent a year)1 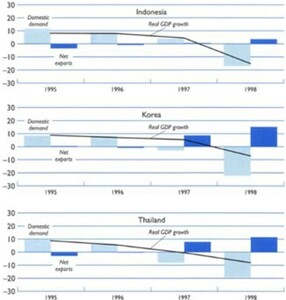 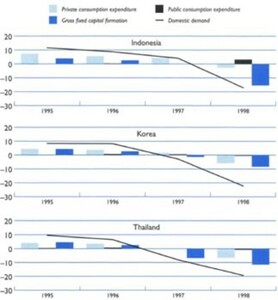 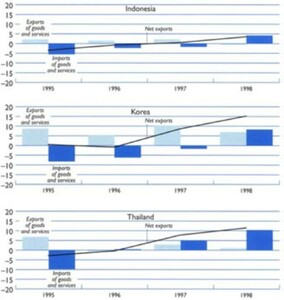 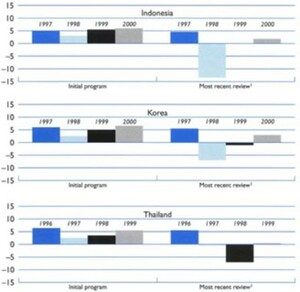 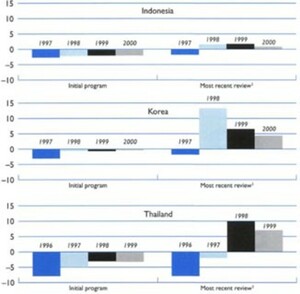 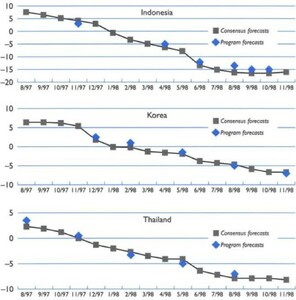 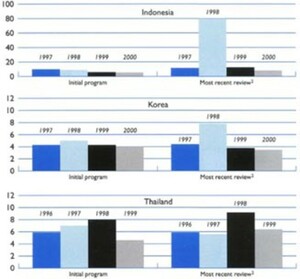