In the previous section, we discussed the response of borrowers, lenders, and policymakers to deregulation; we now turn to the macroeconomic environment that developed following deregulation. All three countries experienced a pronounced long-lived boom-and-bust cycle. Against that background, we will argue that financial liberalization and the accommodative macroeconomic policies contributed significantly to the economic boom, but at the same time made the economies more susceptible to macroeconomic shocks as long as economic agents had not fully adjusted their behavior to the new regulatory environment.

In the previous section, we discussed the response of borrowers, lenders, and policymakers to deregulation; we now turn to the macroeconomic environment that developed following deregulation. All three countries experienced a pronounced long-lived boom-and-bust cycle. Against that background, we will argue that financial liberalization and the accommodative macroeconomic policies contributed significantly to the economic boom, but at the same time made the economies more susceptible to macroeconomic shocks as long as economic agents had not fully adjusted their behavior to the new regulatory environment.

The economic boom followed a similar pattern in the three countries (see Jonung, Soderstrom, and Stymne, 1994). The initial impulse came from abroad when exports rose, such as in Norway following the oil price hike in the early 1980s, or when the terms of trade improved significantly in Finland and Sweden after the oil price decline in 1986 and the surge in world market prices for paper and pulp products in the late 1980s. These initial effects spilled over strongly into domestic demand. In particular, private consumption rose sharply as employment and incomes rose; the initial stimulus was amplified by easier access to credit after the deregulation and by rising wealth attributable to higher asset prices. As a result, the household saving rate in Norway and Sweden became negative. The domestic boom, which was characterized by sharply higher investment activity, was also reinforced by the rapid expansion of credit that fueled speculation in shares and real estate, which in turn raised wealth levels and thus made additional borrowing possible. Monetary policy options to limit the expansionary effects of deregulation were, however, constrained by fixed exchange rate regimes and fiscal policies do not appear to have been tight enough.

In Norway, the downturn was experienced earlier than in the other two countries because of Norway’s heavy dependency on oil exports. The negative terms of trade shock that resulted from the sharp decline in oil prices in 1986, however, did not immediately cause a recession in Norway, and lending growth persisted, aided in part by the additional liquidity support provided by the central bank to financial institutions following the devaluation in 1986.

By the late 1980s, it became increasingly clear also in Finland and Sweden that neither the upward trend in asset prices, which was in part driven by expectations of high inflation, nor the favorable macroeconomic conditions would last and that much of the recent borrowing had pushed private indebtedness to unsustainable heights. The tax reforms in the Nordic countries, in combination with a tightening of monetary policy and lower inflation, raised real after-tax lending rates noticeably and contributed to the sharp drop in property and bank share prices (Figure 7). In response, households began to consolidate their financial positions by cutting back on consumption, and businesses decreased investment considerably. As a result, all three Nordic countries entered a deep recession that in turn accelerated the asset price deflation. Compounding the initial domestic demand shock was the collapse of trade with the member countries of the Council for Mutual Economic Assistance in 1990–91, which affected Finland in particular, and the drop in paper and pulp prices in the world market.

In addition, the depreciation of the Norwegian krone in 1986, the Finnish markka in 1991–93, and the Swedish krona in 1992 increased the domestic currency value of debt denominated in foreign currency. This increase was significant for Finland and Sweden because, in the late 1980s, more than half of the borrowing by the corporate sector was denominated in foreign currency (Brunilla and Takala, 1993). The depreciation was particularly burdensome for firms in the sheltered sectors that lacked foreign currency earnings.36 In general, it became increasingly difficult for small and medium-sized firms to gain access to outside financing. In some cases, even viable firms faced bankruptcies because they were unable to ease liquidity problems through new borrowing. Bankruptcy rates reached record levels in all three countries; in Norway, the number of corporate bankruptcies rose by 40 percent a year during 1986–89 (Figure 8). The financial problems of highly indebted corporate and private borrowers led to a sharp rise in banks’ nonperforming loans. The accumulation of losses and repayment difficulties in the nonfinancial sector as well as the decline in collateral values thus quickly translated into losses in the financial sector that led to the banking crises.

Both in Norway and Sweden, finance companies were the first to show the effects of the emerging crisis in 1986–87 and 1990–91, respectively. Their losses—mainly from property investments—exceeded 5 percent of loans, and many of them went out of business or were restructured. With a one-year lag, it became clear that the difficulties of the finance companies had spilled over to banks because of their involvement in finance companies.

The problems that emerged in the first phase of the Norwegian crisis (1988–89), including heavy loan losses, were regarded as mainly due to bad banking and excessive lending by some small and mediumsized banks. They were not considered a threat to the solidity of the Norwegian banking industry as a whole. Loan losses, however, unexpectedly surged in 1991 to 6 percent of GDP as more banks, including several of the largest, encountered financial difficulties. In 1992, the household and corporate sectors accounted for 20 percent and 77 percent of these losses, respectively (Table 11). In contrast to the first phase of the crisis in 1988 and 1989, when primarily newly established firms faced problems, in 1991 well-established firms, especially in the trade, hotels and restaurants, and real estate sectors, defaulted on their loans(Commission on the Banking Crisis, 1992).

(In percent of total loans)

(In percent of total loans)

For Swedish bank groups as a whole, nonperforming loans increased to 11 percent of GDP in 1993. A relatively small share of the credit losses (11 percent) was attributable to households, while the bulk (75 percent) concerned nonfinancial enterprises. Foreign loans accounted for about 9 percent of loan losses. Initially, the situation of banks was dominated by the real estate crisis: real-estate-related losses accounted for 75 percent of total loan losses in 1991 and about 50 percent in 1993. However, as the recession deepened, the proportion of nonperforming loans not connected with real estate grew substantially.37

In Finland, nonperforming bank loans rose sharply in 1992 to 9.3 percent of banks’ total exposure, even after 3.7 percent had been written off as loan and guarantee losses (see Pensala and Solttila, 1993, for more information). In 1993, almost 60 percent of the loan losses were accounted for by firms, while households were responsible for 25 percent (Table 11). The largest default rates were in the services, real estate and the construction sectors; almost half of banks’ real estate exposure was either written off as credit losses or was nonperforming in 1992. The same was true for construction loans in 1993. In contrast, less than 1 percent of loans to households were booked as credit losses in 1992 and 1993.

An analysis of financial ratios based on bank balance sheets and income statements reveals some common trends. Table 12 presents some financial ratios for commercial banks that were classified officially as insolvent compared with those that remained solvent. The data reveal that failed institutions funded a larger proportion of their loans through sources other than deposits, in particular through money markets and foreign borrowing. This type of funding carried higher costs and meant higher exposure to foreign exchange risks. In addition, as far as Norway is concerned, liquidity provided by the central bank played a much larger role for failed institutions.

Because the Nordic banks, in particular Finnish and Norwegian banks, entered the recession with a relatively small capital base, the huge credit losses eroded the banks’ equity positions quickly. As a result of problem assets, bank profitability deteriorated sharply in all three countries, and income from financial operations declined on account of the loss of interest payments on nonperforming assets.

In fact, almost half of the foreign currency loans had been extended to the domestic sector.

The decline in the share of real-estate-related nonperforming loans is mainly due to the conversion of some of these loans into real estate holdings by banks. 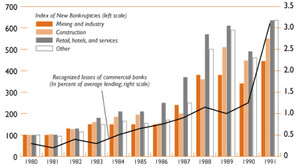