The economic agreements between Israel and the PLO in 1993–95, culminating in the Interim Agreement, largely regularized the existing trade regime of the WBGS. The WBGS is, de facto, in a customs union with Israel, with the above-mentioned Agreement delineating the parameters within which the WBGS may conduct its trade relations with the outside world. Even if the PA were to exercise fully the flexibility that it is allowed in the Interim Agreement for some of its traded goods, the trade regime would still remain basically a customs union, mainly because of the low Israeli tariffs which to some extent set the upper limit to the WBGS’ tariffs.

The economic agreements between Israel and the PLO in 1993–95, culminating in the Interim Agreement, largely regularized the existing trade regime of the WBGS. The WBGS is, de facto, in a customs union with Israel, with the above-mentioned Agreement delineating the parameters within which the WBGS may conduct its trade relations with the outside world. Even if the PA were to exercise fully the flexibility that it is allowed in the Interim Agreement for some of its traded goods, the trade regime would still remain basically a customs union, mainly because of the low Israeli tariffs which to some extent set the upper limit to the WBGS’ tariffs.

Donors consider the achievement of economic and social progress in the WBGS as an essential element of the peace process. They have therefore supported the upgrading of public infrastructure, the enhancement of the human resource base, the relief of social hardship, and paving the way for sustained private sector-led growth in the medium term in support of this agenda. Since the signing of the Declaration of Principles in September 1993, donors have pledged for the period 1994–98 a total of almost US$3.0 billion in assistance to the WBGS. These funds are in addition to any assistance that donors have traditionally allocated to the WBGS through NGOs, the UN system, and other channels. Of these pledges, about 78 percent (US$2.3 billion) has been committed to particular activities in the areas of investment, technical assistance, and transitional support (which includes start-up and recurrent expenditures as well as employment generation activities), with the bulk in the form of grants (see Table 10 and Figure 1). Of this amount, the largest part has been committed for investment projects. By November 1996, 34 donors had disbursed US$1.3 billion to implementing agencies and field offices, with the top five donors—the United States, Japan, the European Union (EU), Norway, and Saudi Arabia—accounting for 58 percent of the total outstanding disbursements. Disbursements for investment projects were 45 percent of such commitments, while disbursements relating to transitional activities were 85 percent of commitments. It must be noted, moreover, that actual disbursements on the ground level were significantly less (especially for investment projects) than these amounts which reflect donor disbursements to implementing agencies.

The relatively slow pace of foreign-financed project implementation is attributed to the following key factors: (i) donors’ procedures, which have not adapted to the unique circumstances of the WBGS, particularly relating to flexibility in reallocating funds and coordinating with other donors; (ii) official Palestinian institutions concerned with coordinating and facilitating the flow of donor assistance, which have only recently enhanced their effectiveness; and (iii) shortages in material and impediments to the movement of local and international personnel involved in project implementation caused by the border closures. While in 1994–95, factors (i) and (ii) were the most important constraints to project implementation, in 1996, factor (iii) gained importance.

The Interim Agreement with Israel sets the parameters for the trade system that will be in effect in the WBGS until agreement on the permanent status of the WBGS is reached at the latest by May 1999. Under its terms, the PA has free access to external markets without restrictions, on the basis of certificates of origin issued by itself. Moreover, the existing agreements allow the WBGS and Israel to form, with respect to certain traded goods, a free trade area, in which the WBGS’ freedom to set customs duties and other trade measures with third countries is clearly delineated.14 Thus the PA is allowed to determine its own import and customs policy and procedures for certain categories of imports. These include import policies (such as rates for customs duties, purchase tax, levies, excises, etc., and licensing requirements) for certain locally produced goods (List Al items) from Jordan, Egypt, and other Arab trading partners and for certain basic foodstuffs (List A2 items) from other countries; the quantities of such imports, however, have to be in accordance with the market need as agreed by Israeli and Palestinian authorities.15 In addition, the PA may set its own customs and other duties on imports (List B items) for its development program. List B imports include specified tools and equipment for the purposes of earth works, stone works, wood works, construction, textile industry, commercial refrigeration, and farming, as well as certain electrical equipment, conveyance equipment, and pharmaceutical products. The PA is also given authority to determine its own rates of customs and purchase tax on imports of motor vehicles and petroleum products. For all other goods, the Israeli import duty rates have to be the minimum basis for the PA and the Israeli import system (such as licensing and standard requirements) has to be utilized. So far, the PA has not implemented any of these prerogatives relating to setting customs and other rates in the Interim Agreement and, in fact, has implemented, with the exception of passenger imports and Jordanian-origin imports, the Israeli trade regime.16

Consequently, the trade regime of the WBGS is at present essentially the same as that of Israel. The latter has more than 85 different ad valorem, specific, combined and alternative tariff rates, with import duties ranging from zero percent to 100 percent, with an average of about 8 percent.17 Duty-free treatment is afforded to about 40 percent of tariff positions. In general Israeli tariff rates on processed items are higher (average of about 10 percent) than those levied on semi-processed items (7 percent average), which in turn are higher than those levied on raw materials (about 2 percent). Israel is unilaterally committed to reducing its tariffs on imports from countries with which it does not have free trade agreements.18 Import licensing and quotas exist for a limited number of products. No duties, taxes or charges are imposed on exports. However, as in other economies, exports may be restricted for a number of reasons, such as for control of quality and standard of goods, compliance with international agreements, and the conservation of local resources. Most products do not require export licenses, although for some commodities (such as food products and fresh agricultural products) export licensing is retained for sanitary and quality control.

As indicated above, Israel has free trade agreements with the United States, the EU, and EFT A. At the end of 1995, the United States finalized an agreement to extend free trade status to the WBGS and efforts are under way to conclude a Euro-Mediterranean Association Agreement with the WBGS.

In conclusion, the envisaged trade regime for the WBGS under the Interim Agreement on the one hand allows the exports of the WBGS free access to the large Israeli market, allows the WBGS to derive the benefits of a relatively liberal trade regime (compared with the trade regimes of neighboring countries) and, to some extent, allows the WBGS to benefit from the existing free trade arrangements of Israel. On the other hand, it forces the WBGS to adopt a trade regime that might not be best suited for its economic circumstances (resource endowments) and development strategy, and may be binding the WBGS to the pace of trade liberalization under way in Israel.

In the first round, a shift from cash to deposits (a transaction between residents) would manifest itself as positive net errors and omissions with a corresponding entry increase in commercial banks’ NFA position. It would finance a current account deficit only when the banks, in the second round, sell this foreign exchange to importers.

There was a significant increase in trade activity in 1995. The recorded absolute increases shown in Table 9 are exaggerated, however, due to the change in the method of estimating exports and imports. See Appendix I for further details.

The exception to a de facto customs union or a de facto free trade area is the provision in the Interim Agreement which allows temporary quotas on six agricultural commodities that are to be traded between WBGS and Israel; these quotas are to be gradually removed by 1998. The quotaed items are poultry, eggs, potatoes, cucumbers, and tomatoes, which are exported from WBGS, and, melon, which is exported from Israel.

Since the signing of the Interim Agreement, the quantities of items in Lists Al and A2 have been increased significantly through agreements with Israel.

The exception relating to passenger imports (i.e., imports brought into WBGS by individual travelers) is a tariff structure that was introduced at the beginning of 1995 for 76 categories of passenger imports. These imports are subject to ad valorem tariff rates ranging from 17 percent to 327 percent and some of these imports (38 categories) are subject to an additional specific rate. Regarding imports from Jordan, tariffs have been set at zero under the trade agreement with Jordan. 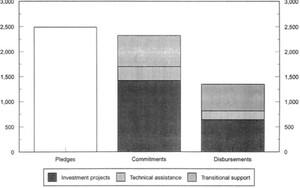