Although the theoretical relationships are ambiguous, evidence suggests a strong link between the choice of the exchange rate regime and macroeconomicperformance. Adopting a pegged exchange rate can lead to lower inflation, but also to slower productivity growth.

Although the theoretical relationships are ambiguous, evidence suggests a strong link between the choice of the exchange rate regime and macroeconomicperformance. Adopting a pegged exchange rate can lead to lower inflation, but also to slower productivity growth.

This paper begins with a brief discussion of difficulties encountered in classifying exchange rate regimes. It then shows how alternative regimes affect inflation and growth. A few observations conclude the essay.

Beyond the traditional fixed-floating dichotomy lies a spectrum of exchange rate regimes. The de facto behavior of an exchange rate, moreover, may diverge from its de jure classification.

While it is customary to speak of fixed and floating exchange rates, regimes actually span a continuum, ranging from pegs to target zones, to floats with heavy, light, or no intervention. The traditional dichotomy can mask important differences among regimes. Accordingly, this analysis uses a three-way classification: pegged, intermediate (i.e., floating rates, but within a predetermined range), and floating.

Regimes can be classified according to either the publicly stated commitment of the central bank (a de jure classification) or the observed behavior of the exchange rate (a de facto classification). Neither method is entirely satisfactory. A country that claims to have a pegged exchange rate might in fact instigate frequent changes in parity. On the other hand, a country might experience very small exchange rate movements, even though the central bank has no obligation to maintain a parity. The approach taken here is to report results according to the stated intention of the central bank, but to supplement these results by categorizing the nonfloating regimes according to whether or not changes in parity were frequent. The de jure classification uses the IMF’s Annual Report on Exchange Arrangements and Exchange Restrictions, while the de facto classification is based on a survey of IMF desk officers for each country. The data are taken from the World Economic Outlook database. In all, observations of GDP growth and consumer price inflation cover 145 countries and 30 years.

To the extent that the peg is credible, there is a stronger readiness to hold domestic currency, which reduces the inflationary consequences of a given expansion in the money supply.

Inflation over our sample averaged 10 percent a year, with pronounced differences in various exchange rate regimes (Chart 1). Countries with pegged exchange rates had an average annual inflation rate of 8 percent, compared with 14 percent for intermediate regimes, and 16 percent for floating regimes.

The differences among regimes are starker for the lower-income countries, where the differential between pegged and floating rates was almost 10 percentage points. As might be expected, countries without capital controls tended to have lower inflation in general. Even for these countries, however, inflation was lower under pegged regimes compared with either intermediate or floating exchange rates.

Since there was a preponderance of pegged exchange rate regimes in the 1960s–when inflation rates were low–the association between low inflation and pegged rates might be more an artifact of the general macroeconomic climate than a property of the regime itself. One way to purge the data of such effects is to measure inflation rates for each regime relative to the average inflation rate (across all regimes) in that year. Doing so, however, leaves the story largely unchanged: as Chart 1 shows, under pegged rates, inflation was 3 percentage points lower than under intermediate and 6 percentage points less than under floating regimes. Again, countries with only occasional changes in parity fared significantly better than those with frequent changes.

What accounts for these results? They derive, in fact, from two separate effects. The first is discipline. Countries with pegged exchange rates have lower rates of growth in money supply, presumably because of the political costs of abandoning a peg. The growth of broad money (currency and deposits) averaged 17 percent a year under pegged exchange rates compared with almost 30 percent under floating regimes. This difference holds regardless of the income level of the country.

In addition, for a given growth rate of the money supply, higher money demand (the desire to hold money rather than spend it) will imply lower inflation. Pegged exchange rates, by enhancing confidence, can engender a greater demand for the domestic currency. This will be reflected in a lower velocity of circulation and a faster decline of domestic interest rates. In the extreme case of perfect credibility, domestic interest rates—even in countries with a history of high inflation—should fall immediately to the world level. Over the sample period, nominal interest rates have tended to rise, but the rate of increase for countries with floating rates was almost 6 percent, as against 2 percent for countries with pegged rates. It was actually highest for countries with intermediate regimes, where the growth rate of interest rates was almost 9 percent. A change in nominal interest rates is of importance because a fall in these rates will lead to a stronger demand for money. But the level of real interest rates (i.e., the nominal rates adjusted for inflation) also gives a direct measure of confidence. On average, the real interest rates were 0.2 percent a year under pegged regimes, 1.8 percent under intermediate regimes, and 2.3 percent under floating regimes.

For a variety of reasons—including interest rates that are set by the authorities rather than being determined by the market—the greater confidence that pegged exchanges can bring may not be fully reflected in the observed domestic interest rate. Nonetheless, it is possible to identify the “confidence effect” of various regimes by considering the residual inflation once the effects of money expansion, real growth, and domestic interest rates have been removed. A higher residual inflation implies lower confidence.

The Dog or the Tail?

Finally, it is worth checking that the results are not driven by contamination across regimes. For instance, it is possible for inflationary pressure to build up—but be held in check—during a period of pegged exchange rates and then explode into open inflation when a float is adopted. In such a case, the high inflation would be blamed on the floating regime, though it should more properly be attributed to the fixed exchange rate period. This suggests dropping the first year or two following a regime change from the data. Conversely, if a regime is not sustained, then it is debatable whether the macroeconomic performance under that regime should be attributed to it. The last couple of years prior to a regime change. ought also to be omitted. Neither modification alters the results. Dropping the first two years following a regime change lowers the differential in favor of pegged rates from 6.0 percentage points to 5.7 percentage points. Dropping the last two years of each regime lowers it to 5.8 percentage points.

Economic theory has relatively little to say about the effects of the nominal exchange rate regime on the growth of output. Typically, arguments focus on the impact on investment and international trade. Advocates argue that pegged exchange rates foster investment by reducing policy uncertainties and lowering real interest rates. But equally, by eliminating an important adjustment mechanism, fixed exchange rates can increase protectionist pressure, distort price signals in the economy, and prevent the efficient allocation of resources across sectors.

Annual GDP growth per capita averaged 1.6 percent over our sample. Although differences exist across exchange rate regimes, these are generally less marked than the differences in inflation rates (Chart 2). Different samples, moreover, lead to varied conclusions about growth under fixed and floating exchange rates. Growth was actually fastest under the intermediate regimes, averaging more than 2 percent a year. It was 1.4 percent a year under pegged exchange rates and 1.7 percent under floating rates. This pattern emerges mainly because of the lower middle-income and low-income countries; growth was somewhat higher under pegged rates for the industrial and upper middle-income countries.

Just as inflation was generally lower in the 1960s, growth rates tended to be higher. Controlling for this widens the differential in favor of floating exchange rates to 0.8 percent over all countries, and as much as 1.5 percent for the lower-income countries.

Investment rates were highest under pegged exchange rates—by as much as 2 percentage points of GDP—with the largest difference for the industrial and upper middle-income countries and almost none for the lower-income countries. With higher investment rates and lower output growth, productivity increases must have been smaller under fixed exchange rates.

Part of the higher productivity growth under floating rates is reflected in faster growth of external trade. Trade growth (measured as the sum of export growth and import growth) is almost 3 percentage points higher under floating rates. The lower-income countries—where real exchange rate misalignments under fixed rates have been more common—show an even larger difference in trade growth between pegged and floating exchange rates.

While not overwhelming, the evidence suggests that fixing the nominal exchange rate can prevent relative prices (including, perhaps, real wages) from adjusting. This lowers economic efficiency. Part, though not all, of this lower productivity growth is offset by higher investment under pegged exchange rates. A comparison of countries that switched regimes shows that a move to floating exchange rates results in an increase of GDP growth of 0.3 percentage points one year after the switch and of more than 1 percentage point three years after the switch. One manifestation of the rigidities that pegged exchange rates can engender is the higher volatility of GDP growth and of employment. As the last rows of Charts 7-12 indicate, GDP growth was more volatile under pegged exchange rates, as was employment.

Does the exchange rate regime matter for macroeconomic performance? The experience of IMF member countries since the 1960s suggests that it does.

The strongest results concern inflation. Pegged exchange rates are associated with significantly better inflation performance (lower inflation and less variability), and there is at least some evidence of a causal relationship. There is, however, an important caveat. Countries that have frequent parity changes—while notionally maintaining a peg—are unlikely to reap the full anti-inflationary benefits of a fixed exchange rate regime.

The choice of exchange rate regime also has implications for economic growth. Pegged rates are associated with higher investment. But they are also correlated with slower productivity growth. On net, output growth is slightly lower under pegged exchange rates. The inability to use the nominal exchange rate as an adjustment mechanism, moreover, results in greater variability of growth and employment.

Atish R. Ghosh is an Economist in the IMF’s European II Department. He holds degrees from Harvard and Oxford Universities.

Jonathan D. Ostry is a Senior Economist in the IMF’s Southeast Asia and Pacific Department and holds a doctorate from the University of Chicago.

Anne-Marie Guide is an Economist in the IMF’s Monetary and Exchange Affairs Department.

Holger C. Wolf is a faculty member of the Stern Business School of New York University and holds a doctorate from Massachusetts Institute of Technology.

Does the Exchange Regime Matter for inflation and Growth?
Author: International Monetary Fund 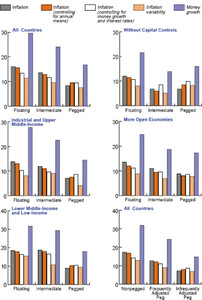 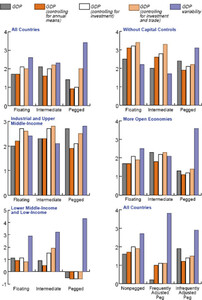