This section draws upon cross-country evidence for as large a group of countries as possible, to examine some of the long-term influences on growth and the role of several policy-related variables. With the aid of a control group and econometric estimates of the long-term determinants of growth, shifts in the growth performance of the eight countries during various adjustment periods are examined. Broad conclusions are summarized here and details of the econometric exercises are discussed in Appendix II.

This section draws upon cross-country evidence for as large a group of countries as possible, to examine some of the long-term influences on growth and the role of several policy-related variables. With the aid of a control group and econometric estimates of the long-term determinants of growth, shifts in the growth performance of the eight countries during various adjustment periods are examined. Broad conclusions are summarized here and details of the econometric exercises are discussed in Appendix II.

Correlations Between Growth and Policy-Related Variables

Using a growth-accounting approach, output growth is decomposed into the contribution made by capital accumulation, labor force growth, and total factor productivity (TFP). The links between policies and growth and the channels through which these links operate are then examined by regressing, in turn, real GDP growth, the rate of increase of the capital stock, and the rate of TFP growth on a set of policy-related variables using panel (that is, across countries and over time) data for a large group of countries over the period 1970-92. Several broad relationships are suggested, but the limitations of the approach should be borne in mind when interpreting the results. Given the inherent difficulty of constructing simple measures of policy variables, it is necessary to use proxies that are also affected by non-policy-related factors. Moreover, the exercise identifies correlations, but does not shed any light on the direction of causality and should not be regarded as a structural equation explaining growth.

Macroeconomic instability (as measured by inflation, fiscal deficits, and parallel exchange market premiums) is significantly negatively correlated with growth. The links appear to operate through a dampening of both investment and productivity. Of course, causality is not unidirectional—for example, in the event of an adverse exogenous shock, causation could run from investment and growth to inflation and the fiscal balance. Evidence from other studies also suggests that the links between inflation and growth are nonlinear, with high inflation much more likely to be associated with slower growth than moderate inflation.17 In such cases, high inflation is probably acting in part as a proxy for complex effects associated with a loss of macroeconomic control and the consequent undermining of private sector confidence.

Structural distortions in the trade and financial systems, as well as low educational attainment, are also negatively correlated with output growth, with the effects operating both through productivity growth and capital accumulation. The cross-country evidence also suggests that favorable terms of trade movements are positively correlated with growth.

Based on these correlations, which policies appear to have influenced long-term growth in the eight countries? Although these variables together explain only a relatively small proportion of the variation in growth across countries and time, the correlations suggest some broad conclusions.18

• Over the entire period being examined, Chile, Mexico, and Ghana experienced much higher inflation rates than the other countries in the present study; Ghana and Bangladesh also had especially large exchange market distortions (see Appendix II, Table 15), suggesting that macroeconomic instability would tend to have dampened growth in these countries.

• As for structural factors, Bangladesh, Ghana, and India generally had the most restrictive trade regimes; Bangladesh and Ghana also had the least developed financial sectors. Human capital formation as measured by educational attainment was especially low in Bangladesh, Ghana, India, Morocco, and Senegal. The correlations discussed above would suggest that these structural distortions and weaknesses are likely to have hindered long-term growth in these countries.

Of course, substantial changes in policies took place over the course of the period of more than two decades considered here. All three of the countries that experienced episodes of very high inflation—Ghana, Chile, and Mexico—lowered inflation substantially over time, while Bangladesh and Ghana also succeeded in reducing considerably their exchange market distortions. The next section examines whether, on the basis of panel data evidence, these achievements appear to have been associated, over time, with higher growth.

Evidence on Shifts in Growth Across Adjustment Periods

Shifts over time in the growth performance of the eight countries are examined using as many other countries as possible as the control group. The approach compares the actual per capita growth performance in each of the eight economies with a counterfactual that is the “world average” growth performance after controlling for key influences—physical and human capital accumulation, technological “catching up,” and terms of trade movements—common to the growth experience of all countries. Using a panel regression framework, growth differentials—which can be interpreted as measures of how each country’s per capita growth differed from the world average in each period after controlling for the above factors—are calculated over each identified adjustment phase for each country.19 A second set of growth differentials is estimated by including the quantifiable proxies for macroeconomic policies discussed above (inflation, fiscal deficits, and parallel market exchange premiums) in the regressions (Chart 9). One would generally expect the remaining growth differentials to be smaller once account is taken of these policy-related variables.20 For example, Chart 9 shows that, after taking into account the influence of factor accumulation, technological convergence, and changes in the terms of trade, Mexico’s growth shifted from rates well above the world average before the debt crisis in 1982 to rates significantly below during the five years following the crisis. When variables proxying the effects of macroeconomic policies are also controlled for, the growth differential in the crisis period is smaller and loses its statistical significance, and in the postcrisis period growth shows no strong rebound relative to the world average (0.7 percent per annum); see Appendix II, Table 17. These findings suggest, first, that periods of severe macroeconomic instability are inimical to growth, and, second, that the absence of a strong recovery in the period since 1988 is especially unusual in view of the considerable progress made in fiscal adjustment and disinflation. More generally, the results suggest the following:

• Countries experiencing episodes of severe macroeconomic instability—such as Chile in the early 1970s, Ghana prior to 1983, and Mexico after the debt crisis in 1982—typically had growth rates well below world averages even after taking account of a number of identifiable influences on growth. In these cases, the remaining growth differentials were generally lower, but still significant (Chile and Ghana) in the specifications including the macroeconomic variables. This suggests that periods of macroeconomic crisis are likely to be especially harmful to growth, but that not all of the negative influences can be captured through a few summary variables. In this context, the eventual rebound in growth in Chile and Ghana appears to be associated in part with the restoration of macroeconomic stability.21

• The growth performance of Bangladesh during its adjustment appears more favorable once account is taken of trends in the rest of the world and factors such as its poor endowment of human capital. After controlling for such factors, its growth is above the world average. A similar judgment can be made about Morocco. Once again, the remaining growth differentials were lower after taking account of these countries’ progress toward macroeconomic stability.

• In countries with long periods of macroeconomic stability, most notably Thailand, growth differentials vis-a-vis the world average are large even with the inclusion of macroeconomic policy-related variables in the equations. This suggests that many factors in addition to those incorporated in the crosscountry regressions underlie the variations in growth. In addition to structural policies and broader regional influences, these may include potentially important, but hard to quantify, factors such as confidence in the government’s track record on economic policy. One purpose of the case studies is to explore some of these latter influences in greater depth, while recognizing that they are often not amenable to rigorous statistical tests. 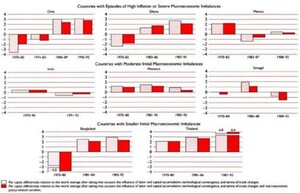