The most pressing requirement in almost all the programs reviewed was to address a critical external financing problem. In a number of countries, mainly in Latin America and Central Europe, high inflation rates (or the threat of inflation in the wake of price liberalization) called for an additional focus on stabilizing prices. The nexus between these two objectives was the need to strengthen public finances. For many countries, especially those with a history of IMF involvement, a heavy interest burden, rather than a large primary deficit, was the source of the fiscal imbalance. Increasing output—both by raising investment and improving productivity—was, of course, both the ultimate objective and the essential condition for a sustainable improvement in the external position.

The most pressing requirement in almost all the programs reviewed was to address a critical external financing problem. In a number of countries, mainly in Latin America and Central Europe, high inflation rates (or the threat of inflation in the wake of price liberalization) called for an additional focus on stabilizing prices. The nexus between these two objectives was the need to strengthen public finances. For many countries, especially those with a history of IMF involvement, a heavy interest burden, rather than a large primary deficit, was the source of the fiscal imbalance. Increasing output—both by raising investment and improving productivity—was, of course, both the ultimate objective and the essential condition for a sustainable improvement in the external position.

Programs were designed within a broad three-pronged approach, the importance of each element depending on the source of a country’s problems and its stage in the adjustment process. The first element consisted of securing external financing to support the program. In all but nine countries this effort depended critically on rescheduling or restructuring debt and debt-service payments.21 in a few countries, mainly among the repeal users where debt-service ratios were high, negotiations started or were under way to reduce commercial bank debt. On average, total net financing (excluding changes in arrears) was projected to rise from about 20 percent of exports in the pre-program year to about 50 percent of exports in the first program year.22 It was planned that this influx, together with smaller current account deficits (mainly in countries just starting adjustment), would permit the elimination of most external arrears in the first year of arrangements, and, again mainly in countries just starting to adjust, a rebuilding of reserves. Inflows were expected to subside after arrears had been cleared, but in most countries better policies and more stable financial conditions were expected to attract inflows above pre-program levels. In general, projected financing appears to have been appropriate for supporting the planned adjustment path and based on reasonable assumptions about the availability of financing if programs were implemented as planned. The principal exceptions were in Central Europe, where the availability of financing was in the end less than was sought in a number of cases even when programs were largely implemented as planned.

The second element of the strategy was to rein in domestic demand, chiefly by reducing fiscal imbalances. Only about half of the programs presented fiscal projections beyond a one-year horizon, so fiscal objectives are viewed here as the average of year-by-year targets relative to outcomes in the preprogram year. On this basis, the planned adjustment was rather ambitious—on average, a reduction in deficits relative to GDP of over 3 percentage points in the average two and a half years of IMF involvement.23 Few programs presented an explicit analysis of the sustainable fiscal deficit, so it is impossible to judge the degree to which targets approached sustainable positions. Nevertheless, to a significant extent, targets for the size and composition of adjustment were tailored to countries’ conditions: the largest reductions in deficits were planned in the countries with the widest initial imbalances; in many countries that started with primary surpluses and large interest bills (mainly countries with previous arrangements), further primary adjustment was to be small, but the interest bill was to rise by less than in other countries (Mexico and Argentina even envisaged sharp cuts in interest payments as inflation fell); planned restraint of capital expenditures featured especially in the oil exporters, which tended to have high government investment; and in Central Europe, where the size of government was the major problem, large reductions in both expenditures and revenues were expected. Generally, the size of projected revenue increases and expenditure restraint were significantly inversely linked to starting levels of revenue and expenditure, respectively, although the link was stronger for expenditure than for revenue. In fact, several countries with low revenues envisaged little increase.

Credit policy was also crucial to the restraint of demand. The impact of fiscal adjustment on bank credit growth was amplified by planned shifts from bank to nonbank financing as financial markets were liberalized. Thus, even though fiscal positions on average were expected to remain in deficit, the slock of net bank credit to the government was programmed to fall and the growth of bank credit to the nongovernment sector to remain stable or rise. In general, programs appear to have envisaged a good balance between fiscal and credit restraint that was not expected to raise interest rates excessively or crowd out private sector activity.

The third element of the strategy was to change conditions directly related to restoring growth. The elements of the strategy already mentioned—improving relations with creditors, mobilizing external finance, and restoring financial stability—were, of course, integral to raising output. Improving external competitiveness was also important: in the year before the programs under review, more than a third of the countries had allowed or induced nominal effective depreciations of more than 10 percent in order to improve external competitiveness. Restraining domestic demand and moderating wage increases were critical to sustaining these gains. Beyond this, however, most countries planned to undertake structural reforms to reduce distortive government interference in the economy, improve the structure of taxation and public expenditure, and create a more outward orientation of the economy. Although most programs supported by stand-by arrangements included commitments to some structural changes, the focus on such policies and the degree of planning and prioritizing tended to be greater in extended arrangements. The Central European countries were exceptions: there, major structural reform was embedded in programs supported by one-year standby arrangements, which were chosen as the means of IMF support owing to the difficulties of spelling out a medium-term program in conditions of extreme uncertainty. Generally, attention to structural reform objectives covered a fairly broad front and aimed to make definite headway in redressing initial problems. Programs would have benefited from a more concrete portrayal of how far proposed structural measures went in redressing structural weaknesses in specific areas.

The reporting of macroeconomic projections over a three-year horizon varied considerably. Medium-term projections for the external accounts were detailed and complete. The degree of external adjustment envisaged differed widely. Where external difficulties were acute (principally in the countries just beginning their adjustment), programs projected relatively large improvements in the current account accompanied by increases in exceptional financing. As a result, large increases in reserves and reductions in arrears were projected (Chart 4).24 In countries that had already achieved a manageable level of reserves and had broadly brought their current account deficits in line with sustainable capital inflows (mainly the countries that had had previous arrangements), a continued steady accumulation of reserves, but little further reduction in the current account, was envisaged. Nevertheless, for several of these countries, exceptional financing to clear arrears was essential.25 Most countries that had had one previous arrangement envisaged a gradual improvement in the current account and reserve accumulation over a three-year horizon, again with sizable inflows of exceptional financing to clear arrears. Debt-service ratios were expected to fall in most countries, but to levels below 25 percent in only about a third of the countries—mainly new users where the ratios had been relatively low at the outset.

Medium-term projections for domestic performance were more patchy, but suggest that the output response to policy changes was expected to be gradual. In the first year of arrangements, output was projected to continue to rise slowly in most countries outside Central Europe, although by the third year after the arrangement was approved, average output growth was projected to rise to 4 percent. Projections for savings and investment, available for only about two thirds of the countries, suggest that, on average, overall savings ratios were expected to rise by only about half of the increase in fiscal savings owing to declines in private savings.26 The incomplete correspondence between fiscal and current account adjustments, particularly in countries that had had several previous arrangements, may suggest that private investment ratios were expected to rise. In general, programs would benefit, to the extent that data permit, from more comprehensive medium-term scenarios that explicitly spell out consistent medium-term prospects for savings, investment, and the current account. This would help determine the adequacy of fiscal adjustment and the need for structural reform to cultivate an environment attractive to investment.

Objectives for inflation showed the greatest variation. Most of the eleven countries with recent or (owing to large-scale price liberalization) prospective inflation rates of over 50 percent (all of which except Bulgaria, Czechoslovakia, and Poland had pursued adjustment throughout the 1980s) had ambitious plans to reduce inflation—on average by over three quarters in the first program year. In most, these goals were reflected in large planned fiscal adjustments—generally significantly stronger than the average for lower-inflation countries. Revisions to wage-indexing arrangements—an issue in several of the high-inflation countries—were planned only in Mexico and Uruguay. In five countries (Argentina, Czechoslovakia, Mexico, Poland, and Yugoslavia), the exchange rate was fixed at or close to the outset of the first arrangement under review. This provided a nominal anchor to enhance the credibility of the disinflation strategy, break inflationary expectations, and direcily stabilize prices of traded goods.

The ten countries with inflation in the range of 10-50 percent tended to be less ambitious in goals for both reducing inflation and supporting fiscal adjustment. In many, this reflected widespread indexing that made it easier to live with inflation—at least in the absence of supply shocks—and prevented the emergence of a constituency for reducing it. Only two—Egypt and Honduras—used the exchange rate as a nominal anchor.27 About half of the countries with intermediate-range inflation, and many with initial inflation below 10 percent, envisaged some increase in inflation in the first year under review, mainly owing to one-time effects of price decontrol, increases in administered prices, or the pass-through of recent depreciations.

Excluding Egypt because a large increase in financing in the pre-program year, which anticipated the program, dominated the average.

The definition of the fiscal balance is the broadest for which data on revenue and expenditure are available. In 24 countries this is the central government; in the other 12, levels of the public sector ranging from the general government to the overall public sector. For details, see Bennett, Carkovic, and Dicks-Mireaux (1995) in Background Papers.

External data are presented relative to exports rather than GDP because the large discrete changes in real exchange rates make intercountry comparisons difficult.

Arrears in these countries had been accumulated during breaks in the IMF’s involvement or when preceding arrangements were off track.

See Savastano (1995) in Background Papers for an analysis of the inverse relationship between public and private savings.

In Egypt, intervention to prevent an appreciation in the face of capital inflows meant that the exchange rate de facto played an anchor role even though there was no announced exchange rate rule.

(Ratios to the value of merchandise exports, in percent; period t refers to first year of program(s) under review) 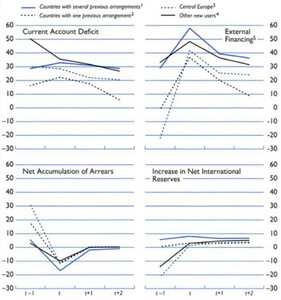