Almost without exception, the initial positions of the countries under review were dire. Most were suffering the effects of long-standing institutional and structural weaknesses, fiscal excesses, and deficient external competitiveness. The resulting deterioration in the external accounts, erosion of official reserves, low growth, inadequate savings and investment, and in many countries rising inflation had often persisted for several years. The severity of the problems shows in the gap between their basic indicators of performance and those in other developing countries (Chart 2).

Almost without exception, the initial positions of the countries under review were dire. Most were suffering the effects of long-standing institutional and structural weaknesses, fiscal excesses, and deficient external competitiveness. The resulting deterioration in the external accounts, erosion of official reserves, low growth, inadequate savings and investment, and in many countries rising inflation had often persisted for several years. The severity of the problems shows in the gap between their basic indicators of performance and those in other developing countries (Chart 2).

Need for Adjustment and Reform

Despite the common adversity of the initial conditions, the countries under review were at varying stages of their adjustment and reform efforts. Almost half had had more than one arrangement with the IMF during the past decade. A few of these, in particular Mexico, had begun to see the returns to previous policy changes. But for most, adjustment had been slow, and although the three years preceding the arrangements under review had brought a measure of stability, the macroeconomic setting remained weak: primary fiscal deficits had improved but heavy debt-service burdens kept overall deficits high; growth, investment, and savings, on average, had been stable but at low rates; in many, inflation had increased sharply; and, while reserves on average had been steady at about three months of imports, the external position in most had been supported by substantial debt relief and in some cases there was an increase in arrears. The need for further debt relief was a key incentive for most of these countries to seek IMF support.

Another six countries had had only one recent arrangement with the IMF, The programs reviewed for these countries were, therefore, a continuation of recently initiated adjustment efforts. Each of these countries had been affected by the drop in oil prices in the mid-1980s—either directly through export receipts or indirectly through close economic links with fuel exporters. This setback had made the stance of financial policies unsustainable and had brought to the fore the effects of structural weaknesses. On average, the previous arrangement had seen a creditable start on adjustment. Four of the countries (the Congo, Egypt, Gabon, and Nigeria) had benefited from debt reschedulings, which, with sizable reductions in current account deficits, had permitted a rebuilding of reserves. On average, these countries had enjoyed a strong recovery of output. Nevertheless, the need for further adjustment was evident in unsustainable debt-service ratios, high and rising fiscal deficits, the edging up of inflation, and falling investment ratios.

Just under half of the countries reviewed were undertaking adjustment programs supported by the IMF for the first time in the recent past. The diversity of these countries was great. Like many countries with one previous program, some (Cameroon, Jordan, Trinidad and Tobago, and Venezuela) were suffering the direct or indirect effects of the fall in oil prices after 1986. Several Central American countries (El Salvador, Guatemala, and Honduras) approached the IMF in the wake of declining export prices and regional political turmoil. Each of these first-time users had seen deteriorations in many economic indicators in the preceding three years: rising fiscal and current account deficits, depletion of reserves, and a dwindling of already low growth rates.19 Two strengths, however, stand out in comparison with the other countries under review: for many, a history of relatively low inflation and moderate debt and debt-service ratios.

A distinctive group of countries receiving IMF support for the first time were the Central European countries (Bulgaria, Czechoslovakia, Hungary, Poland, and Romania).20 There were two main common themes in these countries: first, the enormous task ahead of maintaining financial discipline while creating market institutions and transforming a structure of production inherited from the central planning era; and second, the great uncertainty about the extent and cost of restructuring and the speed at which market institutions could be developed. In most other respects, such as initial per capita income, saving and investment rates, fiscal deficits, external debt, and inflation, the countries were remarkably diverse.

Structural problems were pervasive, although countries that had had previous arrangements with the IMF had typically made some progress in addressing them. These problems are not easy to summarize succinctly, but some generalizations are possible. Inefficient state enterprises were perhaps the most thorny structural problem: in most countries, these were a major drain on public sector finances and on the productive efficiency of the economy. In all countries, except a few that had had several previous arrangements, progress in privatizing enterprises or even improving their financial position had been small. In the area of exchange and trade liberalization, most countries that had had previous arrangements had started phased eliminations of restrictions, but other countries still had important restrictions. In most countries, high tariffs constituted a significant bias against exports. Early steps in financial liberalization had been taken in about half of the countries that had had previous arrangements. Real interest rates had moved to positive levels in many of these but more because of administrative adjustments than because of the decontrol of interest rates. Financial liberalization was, therefore, still on the agenda. For most of the new users of IMF resources, real interest rates were still negative, and financial reform had yet to be started. In almost all of the countries, prudential standards and bank supervision needed improvement.

Conditions in the global economic environment were mixed during the period under review (Chart 3). With the cyclical slowdown in industrial countries, world trade decelerated considerably. Developments in the terms of trade, however, differed for fuel exporters and importers. In most of the non-oil exporters, there was a weakening—for almost half by more than 3 percent a year during the programs. In the fuel exporters, the jump in world oil prices in 1989 and 1990 boosted the terms of trade, and although the increase was reversed, it still significantly helped economic performance during the period reviewed. Conditions in international capital markets improved appreciably for borrowers. Nominal and real interest rates fell markedly after 1989, and commercial bank lending rose. In fact, however, only a handful of the countries under review—principally Mexico and Venezuela—benefited from the latter trend.

Papua New Guinea, which had a precautionary arrangement in 1990 following political disturbances and the closure of a major copper mine, is the main exception: the economy began from a relatively strong position and adverse developments were quickly reversed. Guyana, which also had a stand-by arrangement during this period, is excluded from most of the quantitative analysis in this review because most data lay so far outside the range of those in other countries that averages were distorted by their inclusion.

Hungary had had two previous arrangements but is included with this group because external influences and domestic reform were similar to those in other Central European countries.

Initial Conditions: Countries with IMF Arrangements and Other Developing Countries 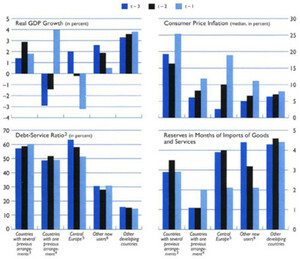