A country’s economic structure and its institutional characteristics are important considerations in determining exchange rate policy. In this context a number of characteristics that are common to many developing countries may be noted:

These characteristics have implications for the choice of an exchange rate system and suggest possible limitations on the use of exchange rate policy to effect resource shifts, particularly in the short run, in response to balance of payments disequilibria.

a. Peg to a single currency

The main drawback to an exchange rate peg to a single currency is that movements in the rate vis–à–vis the currencies of other countries may interfere with domestic policy objectives. To a certain extent, the effects of fluctuations in the exchange rates of other currencies cannot be avoided, but they may be amplified by a single currency peg. If, for example, the intervention currency appreciates vis–à–vis other currencies, then prices of internationally traded goods will fall, stimulating import demand and raising the incentive to shift resources into production intended only for the domestic market (nontraded goods). These effects may be contrary to the intended objectives of macroeconomic policy.

b. Peg to a basket of currencies

An alternative approach to exchange rate policy determination is to maintain a peg to a weighted average of several currency values, commonly referred to as a basket peg. There are two main advantages to this form of exchange arrangement.

There are several disadvantages, however, to a basket peg.

An evaluation of the attractiveness of a floating rate system should allow for the factors mentioned below.

The sharp rise between 1977 and 1990 in the proportion of countries relying on flexible exchange arrangements reflects mainly the increased number of independently floating currencies, although the number of currencies adjusted by means of a managed float, in which the rate is effectively set by the authorities and adjusted frequently, has also grown. The increased use of flexible arrangements has been in large part a response to accelerating domestic inflation rates, which made necessary continuing currency depreciation in order to avoid a deterioration in external competitiveness, and the uncertainties associated with the fluctuations in the exchange rates of the major currencies.

As previously indicated, while basket pegs have been adopted to reduce the impact of major currency fluctuations, there has also been some reluctance to tie exchange rates to a preannounced formula. Rather, countries have found it expedient for both economic and political reasons to adopt a more flexible arrangement.

a. Indicators of adjustment need

The need for an exchange rate adjustment should be considered in the context of an assessment of the overall external position, taking into account prospects for the medium term. This assessment is usually complemented by a consideration of the indicators listed below.

A deterioration in a country’s current account position may have a variety of causes and frequently reflects the impact of a combination of factors. Some of the main factors are the following:

An external imbalance can persist as long as it can be financed by capital inflows or by drawing down official external reserves, but there are limits to these sources of current account finance. A large and persistent current account deficit, therefore, is normally not sustainable and policy actions must be undertaken to deal with the imbalance in order for adjustment to take place. A number of possible policy responses are open to the authorities, including exchange rate action, which is normally undertaken in combination with complementary measures. The latter may include a tightening of fiscal and monetary policy, debt rescheduling, price liberalization, and a variety of structural measures depending on the immediate cause of the problem. The case for exchange rate action is particularly strong when the underlying cause of the current account deterioration has been overly expansionary financial policies, but a worsening of the terms of trade may also call for an exchange rate change.

If the terms of trade deteriorate from a decline in export prices caused, for example, by a recession in the industrial countries, developing countries could await the cyclical upturn and the improvement in prices rather than make a change in the exchange rate. However, if the decline in export prices is a reflection of a more permanent shift in demand away from certain exports, perhaps due to technological change, then diversifying the export base would be called for and an exchange rate action would be appropriate. In practice, developing countries may have neither the reserves nor the borrowing capacity to await the cyclical upturn of industrial countries. They may also lack the ability to diversify the export base in the short or medium term. In either of these situations a devaluation may be required to restore profitability to the export sector.

When the exchange rate remains unchanged while export prices in foreign currency terms fall, the profitability of exports is reduced. A devaluation raises the domestic currency price of exports, thereby increasing their profitability, assuming that the domestic price of all intermediate goods used in their production and labor costs do not rise by an equivalent amount. The higher domestic price of foreign currency following a devaluation will also provide an incentive to develop nontraditional export activities, thus encouraging a diversification of the export base.

Overly expansionary macroeconomic policies frequently have their origin in unrealistically high government expenditures when compared to the financial resources available to the government from tax and nontax revenues and voluntary lending from the nonbank private sector. The ensuing fiscal deficit is then financed by borrowing from the banking system which, when added to bank lending to the private sector, creates an excess supply of liquidity in the economy. The expansionary monetary policy raises incomes, thereby allowing domestic expenditures to increase, which puts pressure on the prices of nontraded goods and on wages. Under a fixed exchange rate, this sequence of events will cause the prices of nontraded goods to rise relative to the prices of traded goods, whose prices are set in world markets. Domestic expenditures on traded goods will thus tend to rise for two reasons: because nominal incomes are higher and because the prices of traded goods are relatively lower. While domestic expenditures are thereby shifted away from nontradables toward tradables, production of tradables is discouraged, as domestic factor costs rise and profits in the traded goods sector are squeezed. Therefore, as a consequence of the expansionary fiscal and monetary policies, the external current account will tend to deteriorate as a larger proportion of tradables is consumed domestically and the supply of tradables is reduced.

If administrative restrictions on imports are to be avoided, the profitability of exports must be restored and expenditures must be cut to a level consistent with the country’s income. In principle, a devaluation can be used to achieve both of these results.

It is important to highlight the fact that for the current account to improve, there must be a reduction in expenditure in real terms which may represent a cut in living standards. A relative price change by itself will not eliminate the external imbalance.

For a devaluation to be effective, the value of the domestic currency must depreciate in real terms. That is, the increase in the relative price and profitability of tradables to nontradables, brought about by the devaluation, must not be eroded by a subsequent rise in the price of nontradables. Since devaluation inevitably increases the aggregate domestic price level there will be pressure to raise wages to compensate for a reduced standard of living of wage earners. Moreover, a devaluation will cause government expenditures on goods and services to rise in proportion to their import content and the size of the devaluation, while the domestic currency equivalent of the cost of debt service payments will also increase. To a certain extent these higher fiscal costs will be offset by a rise in receipts from international trade taxes, but on balance there is likely to be pressure on the budget.

These pressures may force monetary policy to a more accommodating stance, since monetary policy is frequently subordinated to domestic employment and fiscal considerations. Both theory and recent experience suggest that to avoid an erosion of the gains from relative price changes brought about by a devaluation, wage and fiscal restraint are of critical importance.

Several conclusions can be drawn from the experience of countries undertaking exchange rate actions.

The evolution of Singapore’s nominal and real effective exchange rates and the rate of inflation in Singapore relative to its trading partners is shown in the Chart below. From 1978 to 1985 the Singapore dollar, the value of which is determined by a managed float, appreciated vis–a–vis the currencies of Singapore’s trading partners. During this period, exchange rate movements of the Singapore dollar closely followed movements of the U.S. dollar, which was appreciating. Since the inflation rate in Singapore over this period, as measured by the consumer price index (CPI), was lower than its trading partners, the Singapore currency appreciated in real terms by 11.5 percent as compared to a nominal appreciation of 30 percent. If unit labor costs are used to calculate the real effective exchange rate index, however, the real effective appreciation amounted to about 40 percent, as a high wage policy was followed during this period and unit labor costs rose by almost 50 percent. One effect of the real appreciation of the currency was a loss of external competitiveness which contributed to a decline in exports and a recession in 1985.

The policy response to those developments was to implement a severe wage restraint and, owing to the close link between the Singapore dollar and the U.S. dollar, a 16 percent nominal depreciation between 1985 and 1988. As a result, the value of the Singapore dollar in real effective terms depreciated sharply during 1986 and 1987 and to a lesser extent in 1988. Export growth resumed in 1986 and accelerated in 1987–88. In 1989, exchange rate policy was directed toward an appreciation of the currency, mainly in order to forestall inflation pressures. As the currency appreciated by 17 percent in nominal effective terms from mid–1988 to mid–1990, this more than offset the decline of 4 percent in the rate of inflation in Singapore relative to its trading partners, resulting in a real effective appreciation of 13 percent. 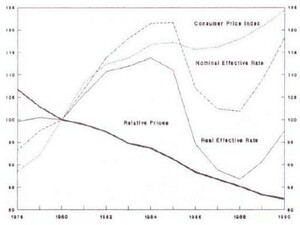