Before the introduction of the New Economic Mechanism in 1968, prices were generally fixed by the authorities and did not reflect the relative scarcity of resources. Differentials between foreign and domestic prices were compensated by transfers of special funds, and consumer and producer prices were separated through a complex system of turnover taxes and subsidies. The 1968 reform introduced a three-tiered price system:

Before the introduction of the New Economic Mechanism in 1968, prices were generally fixed by the authorities and did not reflect the relative scarcity of resources. Differentials between foreign and domestic prices were compensated by transfers of special funds, and consumer and producer prices were separated through a complex system of turnover taxes and subsidies. The 1968 reform introduced a three-tiered price system:

In addition, regulations concerning the profitability of enterprises affected the extent to which producer price adjustments could be passed on to customers or had to be absorbed by profits. This led to a compression of differentials in profitability. Moreover, as a result of an active policy of exchange rate appreciation aimed at moderating the impact of foreign price increases on domestic inflation, the commercial exchange rate fell below the level at which the average cost of earning a unit of foreign currency in exports could be covered. This prompted exporters to press for special assistance, which took the form of special tax exemptions and subsidies.

The Government did not undertake renewed price reform until 1979-80, after it recognized that allocative distortions and economic disequilibria had become unsustainable. First, consumer prices were raised substantially in mid-1979, both to curb consumer demand and to encourage a shift of resources to the external sector. The authorities reduced net food subsidies and raised the net taxation of luxury goods through cuts in price subsidies and changes in turnover tax rates. Despite marked increases in prices of household energy, the subsidy content nevertheless increased because of rises in import and producer prices. The prices of services, including rent and transportation, were not adjusted, and subsidies on these items continued to rise. Second, domestic prices of energy and raw materials were linked to world market prices. The difference between domestic prices and prices of imported inputs from the CMEA area was bridged through “producers’ differential turnover taxes.” In the absence of significant competition, the authorities established a “competitive” price system—intended to simulate competitive price determination. Under this system, domestic prices and profit margins were constrained by the development of export prices and export profit margins. Domestic prices of individual products could not exceed prices of comparable imports by more than could be justified by quality differentials. The National Materials and Price Office monitored and enforced these complex rules (Charts 2 and 3).

Whereas the competitive pricing scheme in the manufacturing sector gave firms an incentive to improve the composition of exports to the convertible currency area, it was also criticized for restraining the real growth of such exports. Enterprises were able to raise profit margins on domestic sales and on exports to the ruble area by reducing the volume of sales to convertible currency markets and by eliminating altogether their less profitable exports. The authorities consequently introduced several modifications that relaxed the mechanical linkage of domestic price formation to foreign price developments.

Beginning in 1985, enterprises that could prove that a substantial part of their output could be exported at a profit—and that did not dominate the domestic market—were eligible to join a so-called price club. Members of this club were freed from the pricing rules limiting profit margins and price increases on domestic sales to export price developments, but they remained subject to the import price constraint. A law against unfair trade practices was adopted in 1985, to provide safeguards against price distortions stemming from an abuse of market power. The law foresaw a shift of prerogatives for the enforcement of fair pricing behavior from administrative bodies to the courts. Because of the dominant influence of administrative bodies, however, these changes were not effectively implemented.

The pricing rules were increasingly perceived to interfere with the promotion of convertible currency exports and import substitution, and the authorities abolished the competitive pricing system in the manufacturing sector in March 1987. Moreover, the restrictive application of the rule prohibiting “unfair” profits, which was seen as an obstacle to raising domestic prices to the level of import prices, was relaxed at midyear. Still, the import price constraint remained in force. The authorities also continued to issue policy guidelines limiting price increases for groups of products—with which enterprises were expected to conform—and to monitor closely the price policy of enterprises.

At the beginning of 1988, producer prices were realigned in connection with the introduction of a personal income tax and the associated grossing up of wages. In addition, strongly differentiated turnover taxes were replaced by a less differentiated value-added tax (VAT), and subsidies were cut. As a result, agricultural and food prices increased and prices in manufacturing, construction, and the services sectors declined. The streamlining of turnover tax rates and subsidy cuts also led to a marked rise in consumer prices. Whereas the price club was discontinued, the authorities introduced a price consultation process with enterprises in areas where market disturbances were anticipated—for example, where market shares of individual suppliers exceeded 25 percent, or where supply difficulties or exceptional price increases occurred. On April 1, 1988—when the general application of the advance notification of intended price increases expired—20 percent of consumer prices remained subject to administratively set ceilings, 22 percent to the advance reporting obligation, and 5 percent to the price consultation process. The remaining 53 percent were subject only to the import price limitation and other general pricing rules that ensure compliance with the law against unfair trade practices. The share of free prices in this sense was raised to 62.5 percent from the beginning of 1989 and to 77 percent at the start of 1990; at the same time, the authorities eliminated the category of price consultations and freed certain agricultural prices.

As a result of the repeated efforts since the 1950s to overhaul the price system, Hungary avoided the accumulation of major distortions in relative prices that characterized most centrally planned economies. The administrative price realignments adopted by the authorities, the linkage of raw materials and energy prices to world market prices, and the adoption of rules to allow greater flexibility in the price policy of enterprises all played a significant role. However, the pricing rules constrained only the profit margins, and not the production costs, of enterprises. At the same time, the remaining administrative controls and the close monitoring of free price formation (an important instrument of anti-inflationary policy) slowed the adjustment of prices to market conditions. Moreover, price distortions attributable to the system of differentiated taxes and subsidies continued to interfere with a rational allocation of resources. Adverse consequences of the latter policies were visible particularly in the excessive weight of heavy industry in production and exports, and in the imbalances in the housing, energy, pharmaceuticals, and health services markets.

The new Government recognizes the need to increase competition through the liberalization of goods and factor markets to create the proper conditions for structural change and efficient resource use. It has taken further steps to liberalize prices. From the beginning of 1991, with the majority of domestic producers subject to competition from imports, the share of consumer prices free from controls was raised to about 90 percent. Central control of prices remains only for textbooks, one type of milk, white bread, and public utilities; local governments set local transport tariffs and housing rents on government-owned flats. Prices liberalized in January 1991 included retail prices of gasoline and fuel oil, while other energy prices were raised substantially. Producer prices for coal, wood for heating, electricity, and natural gas remain controlled. The Price Office, which was responsible for controlling prices, was abolished in January 1991. The rule limiting domestic prices to the price of comparable imports was also abolished. The Government took steps to reduce the scope of production and consumption subsidies and tax allowances (see Section VII). The Government plans to liberalize further regulations on prices. Price liberalization will be reinforced by the stronger competitive environment resulting from import liberalization, the law prohibiting unfair market practices, and the strengthening of enterprise financial discipline. 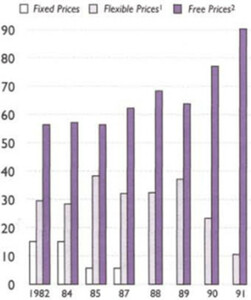 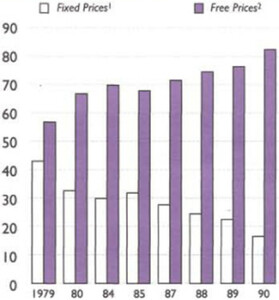