Net flows of direct investment from industrial to developing countries as a group generally increased after the 1960s; from an average of under $2 billion a year during the early 1960s they rose to an average of around $10 billion a year during 1974-82 (Table A.1). However, their share in total capital flows declined substantially, as external borrowing—particularly from commercial banks—grew rapidly. During the 1960s, direct investment accounted for well over half all private capital flows from industrial to developing countries, but by the late 1970s it represented barely one quarter of a much larger volume of such flows, most of which were accounted for by medium-term bank lending or export credits. Official development assistance also grew more rapidly than direct investment throughout most of the 1970s and early 1980s.

Net flows of direct investment from industrial to developing countries as a group generally increased after the 1960s; from an average of under $2 billion a year during the early 1960s they rose to an average of around $10 billion a year during 1974-82 (Table A.1). However, their share in total capital flows declined substantially, as external borrowing—particularly from commercial banks—grew rapidly. During the 1960s, direct investment accounted for well over half all private capital flows from industrial to developing countries, but by the late 1970s it represented barely one quarter of a much larger volume of such flows, most of which were accounted for by medium-term bank lending or export credits. Official development assistance also grew more rapidly than direct investment throughout most of the 1970s and early 1980s.

Net direct investment flows into non-oil developing countries reached a peak of some $13 billion in 1981, but fell substantially in 1982 and 1983 as a result of the recession (Table 1). Nevertheless, direct investment was less severely affected by the recession than was borrowing from private creditors (including bank lending, bond issues, and suppliers” credits). Direct investment fell by 29 percent between 1981 and 1983, while net borrowing from private creditors fell by 72 percent over the same period. Almost all the decline in direct investment appears to have been concentrated in the main borrowers in Latin America; other regions were only moderately affected.

The shift in the composition of financing of current account deficits was reflected in the changing structure of the external liabilities of non-oil developing countries. The stock of foreign direct investment (at its book value) is estimated to have grown at an average annual rate of 11.6 percent between 1973 and 1983 while total external debt grew at a rate of 18 percent (Table 2). (However, these figures understate the relative importance of the stock of foreign direct investment; the current market value of most would be higher than its book value, which is based on historic cost.) Public and publicly guaranteed debt to financial institutions grew even more rapidly. Consequently, the share of direct investment in the total gross external liabilities of non-oil developing countries declined from an estimated 26.5 percent in 1973 to 17 percent in 1983, while the share of public and publicly guaranteed debt to financial institutions rose from 10 percent to 26 percent.2 As a percentage of exports of goods and services, the stock of direct investment in non-oil developing countries declined between 1973 and 1983, whereas the stock of external debt grew considerably (Table 2).

Within these global trends, of course, direct investment patterns in individual countries have varied greatly, according to differences both in economic environment and policies. Much of this investment is concentrated in a small number of countries that have large domestic markets, are rich in natural resources, or have significant advantages as a base for export-oriented production. Five countries (Brazil, South Africa, Mexico, Singapore, and Malaysia) accounted for almost half of the stock of direct investment in non-oil developing countries at the end of 1983 (Table A.2). In contrast, external debt was less concentrated; the five countries with the largest external debt among non-oil developing countries (Mexico, Brazil, Argentina, Korea, and the Philippines) accounted for around two fifths of total outstanding debt of all nonoil developing countries at the end of 1983. However, some other countries that also have large domestic markets (such as India and Turkey), or that have successfully pursued an export-oriented development strategy (such as Korea), were much less reliant on direct investment. Countries that had small domestic markets and that lacked substantial natural resources or an export-oriented manufacturing base (including many in Africa) were often relatively unsuccessful in attracting direct investment, even when they offered substantial incentives and imposed few restrictions. Among the major oil exporters, direct investment grew quite rapidly in Indonesia, but stagnated in most other countries, including Nigeria and Venezuela, partly as a result of government purchases of foreign oil companies’ assets.

The wide variations in countries” reliance on direct investment were reflected in its share in gross external liabilities. At the end of 1983, direct investment was estimated to account for 5 percent or less of the stock of total external liabilities of Algeria, Korea, and Yugoslavia, but for over 28 percent of liabilities for Malaysia, about 44 percent for South Africa and Hong Kong, and over 90 percent for Singapore (Table A.2).

Although little information is available on foreign portfolio purchases of equity in enterprises based in developing countries, such purchases appear to have been very small. For instance, the total stock of equity held by U.S. residents in corporations based outside North America, Japan, and Western Europe at the end of 1983 was valued at only an estimated $1.4 billion, and a substantial proportion of this consisted of stock in companies based in Australia or in tax havens.3 Among the many causes for the slow development of portfolio equity investment in developing countries have been the restrictions imposed by some of these countries (discussed in Section IV), which are sometimes even more stringent than those applied to direct investment, and regulatory restrictions imposed on the portfolios of institutional investors in many capital-exporting countries. However, although the overall size of such investment is still very modest, there has been some growth in recent years. A number of mutual funds were recently established (such as the Mexico Fund and the Korea Fund), sometimes with the assistance of the World Bank’s affiliate, the International Finance Corporation (IFC), with the aim of investing in corporate equity of selected developing countries.

The declining relative importance of direct investment in extractive industries was partly due to the efforts of some governments to increase domestic control of natural resources, either through the nationalization of existing foreign-owned assets or through regulations restricting the entry of new foreign capital into the sector. For example, since 1967 a large number of countries (including most of the major oil exporting countries, as well as Bolivia and Peru) have partially or completely nationalized the local assets of foreign oil companies; foreign investment in oil production is also wholly or largely excluded in a number of other countries (including Brazil, India, and Mexico).

Much of the increased foreign direct investment in manufacturing in developing countries was undertaken primarily to serve growing local markets and was often made in response to trade restrictions imposed as part of a strategy of import-substituting industrialization. This was especially true of investment in a number of Latin American countries, though not in some Asian countries (including Hong Kong, Korea, and Singapore) where more open trade policies encouraged manufacturing for export. Majority-owned manufacturing affiliates of U.S. companies in Latin America exported only 6 percent of their total sales between 1966 and 1976, while manufacturing affiliates in Asia had exports amounting to 24 percent of total sales. These figures refer to gross exports; the relatively low value added in some export-oriented industries may exaggerate the difference between the regions. The contrast between the regions was even larger for Japanese-owned manufacturing affiliates. However, there are indications that, in recent years, the shift in some Latin American countries toward policies designed to improve external competitiveness has encouraged increased exports from both local and foreign-owned enterprises.

The services sector has attracted a growing proportion of direct investment, much of it concentrated in finance, insurance, trade, and tourism. Direct investment in various public utilities, which was once considerable, particularly in Latin America, is now of minor importance. Since utilities are generally natural monopolies, they were early candidates for nationalization, while their regulated prices depressed profitability and discouraged new investment.

Total net borrowing from the parent company or its affiliates accounted for an average of some 15 percent of all direct investment flows from the United States, compared with over 40 percent for Germany, but there were substantial year-to-year fluctuations in its importance.5 Part of the borrowing, even when classified as short term, is automatically rolled over and in practice forms part of an affiliate’s permanent capital base. Another part, however, is much less stable and can be affected by short-term movements in exchange rates and interest rates; a substantial proportion consists of net payments due on trade with the parent company or other affiliates, and is akin to trade credit.

Direct investment capital generally provides only a proportion of the total financing requirements of a foreign-controlled affiliate. The affiliate can also sell equity in the host country and can borrow from third parties, either locally or abroad. Although such external borrowing is classified as foreign debt, it would often not be possible without the direct investment relationship between the affiliate and the parent company. There is little information on the overall magnitude of such borrowing, but it appears to have been substantial. For example, by 1979 at least 17 percent of all external borrowing by Brazil was undertaken by the local subsidiaries of foreign companies; such borrowing was equivalent to around one half of total direct investment in Brazil.6 The overall pattern of financing of the affiliate’s capital expenditures determines both the extent of the foreign capital inflow as well as the apportionment of risks between local and foreign investors; both these factors can play an important role in the effects of direct investment on a country’s external adjustment.

This financing pattern is influenced by the host country’s interest rate, exchange rate, and tax policies as well as by its policies affecting the share of foreign ownership in domestic enterprises. Many developing countries have discouraged full or majority foreign ownership, and foreign investors have also increasingly sought local equity participation as a means both of sharing risks and increasing local acceptability. As a result, wholly- and majority-owned foreign affiliates have declined in relative importance. Arrangements not involving foreign equity participation, such as licensing, management contracts, and international subcontracting, have also grown rapidly in recent years.7 Although such arrangements generally do not result in any capital inflow, they do involve the transfers of technological and managerial expertise normally associated with direct investment.

(As percent of exports of goods and services) 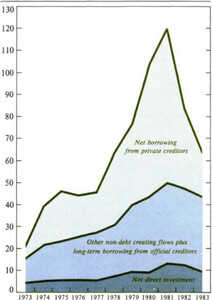 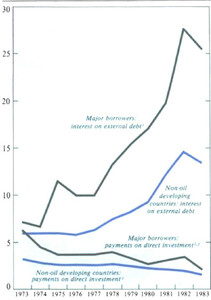