This handbook is aimed at anyone who is involved in a Public Investment Management Assessment (PIMA) or who has a practical interest in public investment management. It is intended to be useful for country authorities, IMF staff, staff of other financial institutions and development organizations, and anyone who is interested in exploring different aspects of public investment management to understand how country systems are designed and how they work in practice.

What Do PIMAs Tell Us About the Strength of Infrastructure Governance Institutions?

PIMAs provide valuable insights into the strength of institutions within and across countries (Taz, Matsumuto, and Murara 2020). As subsequently discussed in more detail, the PIMAs show the following:

Countries score higher on institutional design than effectiveness. All countries assessed achieved an average score of 1.9 on institutional design compared to 1.8 on effectiveness. This is mostly explained by the lower performance of LIDCs and EMEs on effectiveness compared with AEs, perhaps reflecting that the latter have longer experiences in implementing robust governance systems as well as better access to strong technical and managerial skills. Figure 3.2 shows aggregate results for countries where the variation in performance seems evident from the size of the gap between design and effectiveness. Turning to Figure 3.3, EMEs appear to score lower on effectiveness compared with institutional design, while LIDCs show a similar difference between the two. Both groups show similar institutional strength in the planning and allocation stages. However, LIDCs fall behind in key aspects of implementation, for example, by failing to provide funding for investment projects in a timely manner, likely because of cash constraints.

The challenges faced by LIDCs are frequently related to capacity constraints, particularly in implementing policy reforms. LIDCs have often focused on setting up the legal and regulatory aspects of infrastructure governance, with less attention paid to implementation. They have relatively strong design features in national and sectoral planning, enacting strong public procurement laws and adopting fiscal rules, but weak capacity to undertake rigorous project appraisal and selection. For example, while Mali has relatively solid systems for project selection, it has yet to implement them fully.

Gaps between institutional design and effectiveness are evident in all three stages of public investment (Figure 3.4). At the planning stage, most countries struggle to design and implement robust systems for project appraisal. At the allocation stage, the lowest effectiveness scores are recorded for project selection and maintenance funding. Most countries, including AEs, also fail to apply a standard methodology for estimating routine and capital maintenance costs. At the implementation stage, the lowest scores are recorded in the monitoring of public assets.

Better scores are often achieved in the early stages of the investment cycle, when countries are setting fiscal targets and rules, and formulating national and sectoral plans. Once in place, these broad frameworks and supporting rules are difficult to translate into effective allocation and implementation because of weaknesses in project selection, maintenance funding, and the monitoring of public assets.

Project appraisal and selection stand out as two of the weakest areas. Project selection is weak across all countries, regardless of income level, while appraisal is a challenge particularly for EMEs and LIDCs. Project appraisal is technically difficult; however, the process is often rushed because of the pressure to deliver quickly, resulting in shortcuts being taken to get to procurement. When coupled with political interference during the process of project selection, the outcome can be poor in terms of quality of the works.

Monitoring of public assets also stands out as a weakness. Once the asset has been delivered, less attention is paid to maintain its quality. For example, few countries have a detailed understanding of the number of buildings they have in the public sector, the status of those assets, and the maintenance backlog. The same applies to other types of infrastructure. Inadequate information on asset status also undermines maintenance planning.

How Are PIMAs Used?

PIMAs produce a set of prioritized recommendations tailored for each country and informed by multiple information sources. While recommendations cover all stages, reflecting the variety of challenges encountered in different countries, the most common PIMA recommendation seems to concern the area of alternative infrastructure financing, as seen in Figure 3.5. Public-private partnerships and public corporation investment are often introduced as alternative ways to scale up infrastructure investment by directing resources through channels that are not restricted by traditional procurement and budget procedures. Yet, these alternative channels tend to fall outside the budget process and have become major sources of fiscal risk for national budgets possibly because of poor governance, inadequate central oversight, or weak procurement controls.

In addition, project appraisal, and project selection are featured regularly in the individual reform agenda reflecting widespread weaknesses in these areas. Improved project preparation will often be a basic building block for many of the other reforms. If projects do not have realistic cost estimates and timetables, then efforts to improve project delivery mechanisms are unlikely to succeed.

For country authorities, the PIMA report provides a basis for developing reform plans tailored to their needs and prioritized in line with their resources and institutional capabilities. The report brings together in-depth data analyses based on standard charts, and useful qualitative discussions of key issues. Also, because of the consultative approach that is followed, which encompasses government ministries and agencies, development partners, and other actors, the reform plan arising from PIMA assessments typically has broad support. Many countries have taken actions to implement PIMA recommendations. Among them, some specific examples of follow-up actions are presented in Box 3.1.

PIMA recommendations and action plans need to be carefully tailored to the specific context, capacities, and priorities of each country. Some recommendations, particularly related to institutional design, may follow directly from the assessment. For example, if there is no mechanism for project appraisal at all, the establishment of such a mechanism will in many cases be an obvious solution. However, the specific approach, timeline, and detailed design will depend on the circumstances of the country. This handbook discusses how to assess the different PIMA institutions, including their effectiveness, but does not provide general recommendations for how to define reform programs. These must be developed through the in-country assessments and other analytical work.1

Examples of Infrastructure Governance Reforms Based on PIMA Recommendations

The PIMA conducted in Ireland (July 2017) found infrastructure governance practices to be of a generally high standard for both institutional design and effectiveness. Nonetheless, a number of recommendations were made to further enhance infrastructure governance practices at all stages of the public investment cycle. The National Development Plan 2018–2027, published in February 2018, presented several new measures based on the PIMA recommendations. These include (1) the establishment of an infrastructure projects steering group; (2) publication of a capital tracker, which will become Ireland’s primary tool for public transparency on infrastructure projects, priorities, timelines, and performance targets; and (3) improvements in the methods of project appraisal and selection. The government has also reinforced technical processes and staff resources in the Department of Public Expenditure and Reform and other government departments dedicated to the appraisal and ex post evaluation of investment projects.

In Kenya, the PIMA conducted in January 2017 recommended the establishment of a central public investment management unit to improve the coordination among ministries and agencies. It also identified the need for a set of standard project appraisal guidelines to bring consistency across different entities. In the months that followed, both of these reforms were implemented by the government with the support of development partners. The reforms came at a time when President Uhuru Kenyatta announced a step-up in the fight against corruption, resulting in the greater transparency around large-scale procurement decisions. Such transparency was another area highlighted for action by the PIMA.

From 2012 to 2013, Mongolia experienced a rapid expansion of off-budget spending on public investment, financed by borrowing through the Development Bank of Mongolia (DBM). The level of spending, which was volatile, reached nearly 10 percent of GDP and led to a large accumulation of liabilities. In the context of declining revenues, Mongolia was unable to sustain this level of spending as it reached the limits of its borrowing capacity. Following the PIMA, the authorities transferred the off-budget projects to the state budget and introduced tighter control over borrowing by DBM for new projects. In addition, they improved project appraisal and selection through a new standard methodology and evaluation criteria, as recommended by the PIMA. This will help to improve the quality of project preparation and contribute to stronger project implementation.

A forthcoming IMF working paper will discuss public investment management in LIDCs, including how to design reform programs and prioritize measures in low-capacity countries.

Institutional Design versus Effectiveness, All Countries, 2015–20

Institutional and Effectiveness Scores, by Stage of Investment, 2015–20

Number of PIMA Recommendations, by Institution, 2015–20 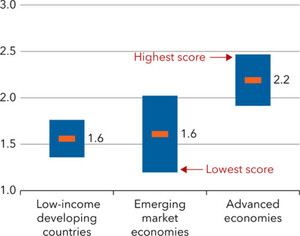 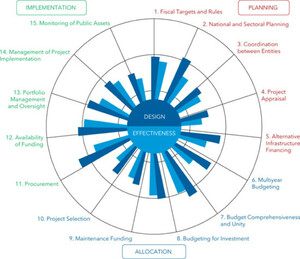 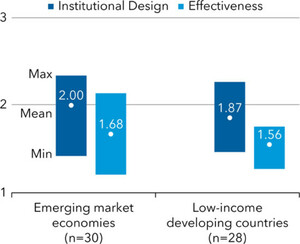 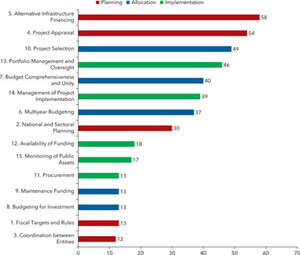