Local governments play a critical role in executing fiscal policies in China. Aside from providing basic public services, they undertook sizable public investment that has contributed to remarkable growth. Much of the large-scale fiscal stimulus since the global financial crisis was carried out through local governments. Along with public infrastructure investment, local governments have also contributed to the real estate boom through land development. In addition, research has attributed competition among prefectural local governments as a significant factor in China’s growth success (Song, Storesletten, and Zilibotti 2011).

Local governments play a critical role in executing fiscal policies in China. Aside from providing basic public services, they undertook sizable public investment that has contributed to remarkable growth. Much of the large-scale fiscal stimulus since the global financial crisis was carried out through local governments. Along with public infrastructure investment, local governments have also contributed to the real estate boom through land development. In addition, research has attributed competition among prefectural local governments as a significant factor in China’s growth success (Song, Storesletten, and Zilibotti 2011).

Yet although local governments have played a key role in growth, their revenue base is small relative to their spending obligations. Local government tax revenue accounted for nearly half of total government revenue, while spending obligations were roughly two-thirds of the total (Wang and Herd 2013). Even accounting for transfers from central government, they still faced a structural shortfall. Until the revised budget law was effective, local governments, with the exception of a few pilot programs, were formally prohibited from borrowing. They therefore had strong incentives to circumvent financing constraints by obtaining revenue from land sales and setting up financing vehicles to borrow from banks and capital markets and to undertake build-and-transfer arrangements.

While the budget law and related directives could strengthen local government finances, key hurdles remain, and success will rest on decisive implementation. For example, circumvention to borrow in ways prohibited in the budget law continues, as the Ministry of Finance notes. Local government bond markets remain underdeveloped despite growing in size. As a result, policy priorities will be to further strengthen local government finances by reining in possible circumvention, developing greater liquidity and credit discipline in the bond market, formulating a resolution framework for potential financial distress of local government, monitoring emerging risks from public-private partnerships, and aligning intergovernmental revenue and spending.

Local governments in China play a critical role in executing fiscal policies. Four broad subnational government levels exist (provincial, prefectural, county, township), with an informal village government below the township level. Each government level reports to the level above it, similar to the arrangement of the People’s Congress at each subnational level. Provincial government consists of 36 provinces, autonomous regions, and provincial-level municipalities. Over 3,000 prefectural and county-level governments undertake most public services and investment. Prefectures and counties are often densely populated, ranging from 150,000 to 2 million residents.

Local governments receive transfers from an upper level, while providing for those at lower levels. County governments typically have the highest spending obligations (in relative terms) and are therefore the most dependent on transfers.

Local government financial positions vary significantly across regions. In general, metropolitan areas have stronger fiscal positions than inner regions (Figure 6.1 and Brys and others 2013), with indirect taxes comprising more of their revenue (Annex 6.1 and Annex Tables 6.1.1 and 6.1.2). Tax revenue accounts for 18 percent of GDP in large provincial-level municipalities on average, compared with about 12 percent of GDP in other provinces. On a consolidated basis, including lower-level government, provinces are generally in deficits.

Local governments face structural challenges in their finances. First, their spending obligations often far outstrip their revenues.1 Although the central government provides transfers amounting to more than two-thirds of local government revenue, the transfers do not fully cover the misalignment. Second, each level of local government was required to maintain a balanced budget and was prohibited from borrowing (except in a few pilot cases) prior to the adoption of the revised budget law in 2015 (see below). As a result of these two constraints, local governments have relied on other means of financing, such as land-sale revenue, and have circumvented those constraints by establishing quasi-fiscal local government financing vehicles (LGFVs) to borrow from banks (against their land collateral) or to undertake other financing for infrastructure projects.

Local government financing vehicles (LGFVs) are distinct entities owned by local governments, typically established for public infrastructure. In fact, the increase in infrastructure spending after the global financial crisis was mostly financed off budget through borrowing by LGFVs. They are legally registered as corporations and have public sector objectives, in contrast with state-owned enterprises, which tend to run on a mostly commercial basis (Appendix III of IMF 2014). In many cases, local governments shared the LGFVs’ responsibilities to service debt and provide guarantees on their debt.

Financing through LGFVs has contributed to growing fiscal risks. Along with the reliance on land-sale revenue, off-budget LGFV borrowing has grown substantially in recent years. Expanding the definition of government to include LGFV activities, the “augmented” fiscal deficit of general government was about 10 percent of GDP in recent years (Annex 6.2 and Figure 6.2). The flip side of the rapid increase in off-budget spending has been the rise of “augmented” local government debt to RMB28 trillion, or 41.7 percent of GDP as of end-2015, of which more than two-thirds was explicit government debt (IMF 2016; Lam and Wingender 2015). Based on these augmented balances, fiscal space has been considerably more limited than headline data suggest. The large augmented fiscal deficits raise questions about local governments’ ability to continue financing the current level of spending and service their debts (Barnett and Zhang 2014), including the following:

Interim steps were taken to smooth the implementation of the new budget law. First, ongoing local government infrastructure projects were allowed to borrow in the original ways in 2015. Second, the government promoted greater use of PPPs to leverage private participation in infrastructure projects. Third, the debt-swap program was introduced to replace maturing local government debt (identified in the national audit) with bonds, beginning in 2015, over a horizon of three to five years (Figure 6.3).

The debt-swap program has also contributed to the expansion of the local government bond market, which has steadily increased to about 8.7 percent of GDP by June 2016. At the same time, the debt-swap program has restructured local government debt by extending the maturity from one to three years to an average of five to seven years and reducing the interest burden for local government by about 400 basis points.4 Spreads over sovereign bonds were tight at about 30–50 basis points for public auctions and 40–70 basis points for targeted placements, which did not fully reflect underlying credit risks. As banks were the key investors in these bonds, they faced a lower interest margin and extended the maturity of claims, thereby widening balance sheet mismatch. In return, banks gained the certainty that local government would honor such obligations, instead of an implicit guarantee on claims against LGFVs. Banks’ capital buffers would improve because the risk weight of capital would drop from 100 percent on LGFV loans to 20 percent on local government bonds. The net impact varies across banks and depends on their exposure to local governments.

However, key hurdles remain in the implementation of the budget law, including the following:

Decisive implementation of the budget law, along with further reforms, would need to address remaining hurdles outlined above, including:

In case of restructuring local government debt, international experience suggests a transparent and impartial administrative or judicial mechanism (World Bank 2013a, 2013b). Enhanced oversight could involve progressive loss of local budget autonomy if a local government is unable to address financial risks (Wei 2014). Typically it involves a sequence of establishing restructuring plans depending on the corrective actions and the specified time frame (van Eden and others 2015).7 For example, Norway and North Carolina in the United States have a framework to resolve fiscal distress (Table 6.1).

For China, the framework can contain measures to raise intergovernmental transfers and/or to prohibit further bond issuance and allocate losses to creditors, while ensuring minimum moral hazard and disruptions to public services. The framework would apply to subprovincial-level governments. The provinces would execute monitoring and oversight. Local governments that experience repayment difficulties but do not pose systemic risks could be subject to conditionality during the debt restructuring. The revised budget law prohibits any bail-out of the provinces.

Local governments have been a key driver of investment-led growth, but have faced a structural shortfall of revenue relative to their large spending obligations. This has created incentives to obtain financing through land sales and to set up financing vehicles to borrow from banks and capital markets. Limited oversight has given rise to the rapid buildup of vulnerabilities in local government finances.

The success of reforms is by no means guaranteed and rests on implementation. Further steps are needed to fully establish a sustainable regulatory framework, including enhancing oversight and disclosure, developing the bond market with greater credit discipline and liquidity, establishing a resolution framework for potential financial distress on local government debt, and closer monitoring of emerging risks from PPPs. Putting local government finances on a sound footing also calls for the alignment of intergovernmental fiscal relations.

We are thankful for comments from the Development Research Council of the State Council, experts from the Ministry of Finance, the People’s Bank of China and the Chinese Academy of Social Sciences, Philippe Wingender, CUI Lu (Ministry of Finance), TANG Tao (People’s Bank of China), ZHAO Weixin (Renmin University of China), and YI Cheran (University of Science and Technology Beijing). Sung Jung provided excellent research assistance.

Interest on local government bonds is exempt from taxes and can be traded in both interbank and securities exchange markets. The interbank market is the dominant platform (trading in the China Futures and Exchange Trading System) and accounts for over 90 percent of bond turnover. The exchange markets trade bonds through public auctions at the Shanghai and Shenzhen stock exchanges.

Bonds issued so far have been plain vanilla with bullet maturities of 3, 5, 7, and 10 years, at fixed rates, offering regular coupon payments, and in domestic currency.

The Ministry of Finance uses a debt-to-GDP ratio of 60 percent and debt-to-revenue ratio of 100 percent as thresholds for monitoring the risk. Additional indicators can include (1) debt-service-to-free-revenue ratios that capture free revenue not otherwise dedicated to specific uses or committed by contract for repayment; (2) debt service to current primary balance, which assesses the risks before interest payments; and (3) current-surplus (deficit)-to-revenue ratio, local-wage-to-current-expenditure ratio, and local-tax and fees-to-revenue ratios.

For instance, the adjustment of fiscal positions to meet debt services may take a few years. The plan could include annual benchmarks to measures progress.

Tax Revenue on Income, Profit, and Capital Gains across Countries 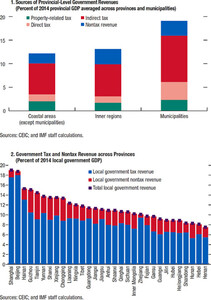 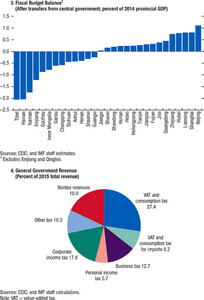 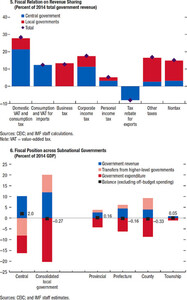 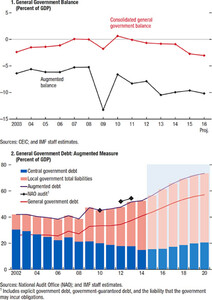 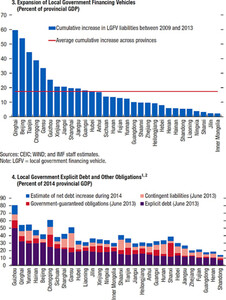 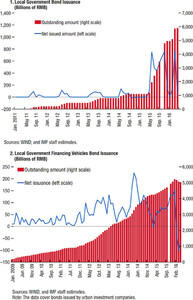 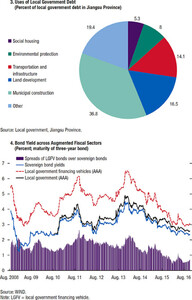 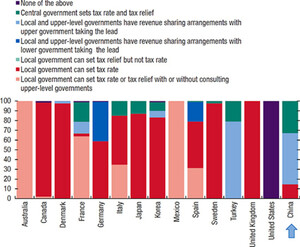 The 2015 Fiscal Budget under the New Budget Law