During the first decade of transition, amid volatility and weak growth, containing fiscal imbalances was an urgent task to achieve macroeconomic stability. After the initial phase was over, as fiscal institutions were modernized and income levels started to grow, the fiscal positions of most countries in the region improved significantly—especially as revenues benefited in the boom years that preceded the global financial crisis. The crisis prompted governments to take a range of adjustment measures, some in the context of IMF-supported programs. Looking at the region as a whole, a decline in deficits was achieved, but fiscal vulnerabilities remain high in a number of countries.

During the first decade of transition, amid volatility and weak growth, containing fiscal imbalances was an urgent task to achieve macroeconomic stability. After the initial phase was over, as fiscal institutions were modernized and income levels started to grow, the fiscal positions of most countries in the region improved significantly—especially as revenues benefited in the boom years that preceded the global financial crisis. The crisis prompted governments to take a range of adjustment measures, some in the context of IMF-supported programs. Looking at the region as a whole, a decline in deficits was achieved, but fiscal vulnerabilities remain high in a number of countries.

Fiscal challenges in the 1990s

At the beginning of transition, most countries experienced a dramatic decline in tax revenues. While output was collapsing, the tax system and administration was not prepared for the needs of a market economy.1 The old system relied to a large extent on turnover taxes, taxes on enterprises and payroll taxes, and tax administration was largely based on negotiations between enterprises and government officials, rather than on a codified system with tax bases and rates clearly defined in law. With the transition to a market economy, dramatic increases in the number of enterprises put significant pressures on tax administration. Reforms to create new, modern tax authorities were essential, but progress varied across countries, with slower progress in CIS and SEE countries.

The structure of revenues changed too. While payroll taxes remained a significant source of revenues, the collection of corporate taxes (former profit remittances) declined substantially. And trade liberalization led to a significant reduction in customs revenues. The main innovation in response was the introduction of value-added tax (VAT), which by 2000 had already been adopted in 17 countries. As well as improving resource allocation by reducing distortions in product and factor markets, this generally led to improved revenue performance, although the VAT share in total revenues varied significantly.2

Adjusting public expenditures in line with the sharply declining revenues was essential to maintain fiscal sustainability. As a result of price liberalization, many state companies stopped relying on government subsidies. Also, military expenditures declined significantly across the region, and capital expenditures were cut heavily. Public sector reforms improved control over wages. However, budget spending on social assistance increased, as governments took on more social responsibilities that had been shared with employers under the socialist regime. The transition also called for reforms in expenditure management systems. Under the existing systems, government institutions enjoyed financial autonomy both in collecting own revenues and in spending decisions. The challenge was to establish modern financial systems that enabled centralized budget planning and proper financial accounting for the central government.

But most countries succeeded in bringing their fiscal deficits under control during the 1990s, albeit some much earlier than others. Recorded general government deficits fell on average by 1¼ percentage points to about 3½ percent of GDP between 1992 and 2000—although the overall adjustment was probably greater, as in the initial years governments often had trouble controlling or even monitoring public enterprises’ deficits, which were often financed by central bank credit or arrears. While the size of deficit reductions varied significantly across countries, spending cuts, particularly in current expenditures, have tended be more durable than revenue-based adjustments, contributing to successful fiscal rebalancing to put public finances on a sustainable path.3

Despite the sizable deficit reductions, public debt increased considerably. The average public debt exceeded 55 percent of GDP in 2000, up from 19 percent in 1992–93. The increase was largely driven by CIS countries, where the recognition of off-budget and quasi-fiscal liabilities, and the more pronounced output decline, contributed to rising public debt. And within the average some countries (such as Bulgaria and Poland) saw decreasing public debt due to the impact of debt restructuring.

Fiscal developments during the boom years

The strong domestic demand-driven growth that characterized the mid-2000s was reflected in fiscal revenues, and the headline fiscal positions of most countries in the region improved significantly. Revenues grew faster than GDP, helped by strong revenues from profit and consumption taxes, while public expenditures grew in line with GDP on average—although within this current expenditures tended to increase as interest burdens fell. For most countries, lower deficits and high growth resulted in large reductions in debt to GDP ratios in this period—by as much as 50 percent of GDP or more over 2000-07 in Bulgaria, Moldova and Russia, the last helped by strong oil prices. Three Central European countries bucked the trend, however, with rising debt: although improving through the period, deficits averaged 4 percent of GDP in the Czech Republic and Poland, while Hungary had consistently large deficits, averaging 7 percent of GDP. Diversion of revenues into funded pension schemes accounted for part of Hungary’s underperformance, but the main factor was weak fiscal discipline in the face of easy financing conditions. The Slovak Republic, in contrast, achieved large reductions in both deficits and debt in this period.

In fact, fiscal policy across the board turned out to be less prudent than it appeared at the time. The opportunity to use windfall revenues for more ambitious deficit reduction was forgone in many cases. Many countries adopted fiscal rules, with a view to imposing a durable constraint on fiscal aggregates. Supranational rules were adopted in the context of EU accession, and many countries adopted national rules as well. However, the rules were mostly based on budget balances, without careful consideration of business cycles, potentially resulting in procyclical fiscal policy. Looking back, estimates of structural deficits—that is, correcting for the effect of the unsustainable demand boom on revenues—show that underlying fiscal positions strengthened on average during the early 2000s, but actually deteriorated again from 2005, even though headline balances continued to improve. Weak corrective procedures and the suspension of sanctions for excessive deficits at the EU level contributed to further weakening of financial discipline.

The crisis of 2008–09 had very serious effects on the fiscal situations of the transition countries, with tax revenues dropping sharply as housing bubbles burst and domestic demand shrank. For example, in 2008, fiscal balances in Estonia and Latvia worsened by about 5 and 8 percent of GDP respectively. As discussed in Chapter X, fiscal responses to the crisis varied across countries, depending on their pre-crisis fiscal buffers, exchange rate regimes, and the political cycle. Despite serious fiscal adjustment efforts, the average fiscal balance for the region fell to a deficit of over 6 percent of GDP in 2009, with near-double digit deficits in some countries.

Subsequent significant fiscal consolidation, coupled with economic recovery, reduced deficits to a little over 3 percent of GDP on average by 2013. Fiscal adjustment was most dramatic in Latvia, Lithuania, Romania, Russia and the Slovak Republic, where deficits have declined by 5 percent of GDP or more since 2009. In contrast, many SEE countries saw deficits deteriorate in this period, in large part reflecting the effects of continued recession. The consolidation was mostly achieved through expenditure cuts. Looking at the region as a whole, revenues weakened by nearly 1 percent of GDP on average and were much more than offset by expenditure cuts averaging 2½ percent of GDP. Again, the results differ significantly by country. On one end of the spectrum, the Baltic countries adjusted expenditures by about 8 percent of GDP on average, while in Bulgaria, Croatia and Slovenia expenditures increased in terms of GDP. The successful fiscal consolidations stabilized public debt, but in Southeastern European countries that had less ambitious adjustment programs, public debt remains on an increasing path.

Despite the declines in regional average deficits, fiscal vulnerabilities remain high in a number of countries. In 2014 deficits are set to remain above 4 percent of GDP in several countries, concentrated in the Western Balkans—some of which, along with Hungary, Slovenia and Ukraine, also have high public debt. In order to bring debt to a sustainable path the high deficits should be addressed promptly, including through growth-friendly fiscal consolidation alongside structural reforms to boost potential growth. Due to already high tax burdens, the focus of the adjustment, for most countries, will have to be on the expenditure side, as well as on strengthened tax administration.

In many countries, even where expenditure levels have adjusted, composition of expenditure remains an issue. Broad expenditure reforms, especially in heath, education, and other social sectors to increase targeted transfers and subsidies would increase the efficiency of public expenditure. Similarly, reducing quasi-fiscal activities while protecting capital spending, and consolidating medium-term budgeting practices would provide predictability, tailoring fiscal policy towards achieving its objectives, including growth and poverty alleviation.

Demographic factors also pose major challenges to fiscal policy, as well as to growth strategies more generally. The working age share of the population is projected to embark on a secular decline from the middle of this decade on. The fact that these projections are no worse than for many other countries does not diminish the problem. As in advanced European economies, the most direct impact of aging populations and shrinking labor forces is on already overstretched state pension schemes: the average old age dependency ratio in the transition countries is projected to more than double in 40 years, from 20 percent of the working age population in 2010 to 43 percent in 2050. Sluggish growth will only add to these pressures. Although countries have adopted a number of reforms through the transition—parametric reforms such as increased pension ages, strengthened contributions collection, and, in several cases, multi-pillar systems with a funded component—these are mostly insufficient for pension systems to sustain adequate benefit levels in the medium term. Raising retirement ages further, encouraging greater labor market participation—including of women, whose participation is quite low across the region—and strengthening incentives for voluntary saving for retirement, would aid the sustainability of pension systems, and boost growth.

Introduction and evolution of VAT 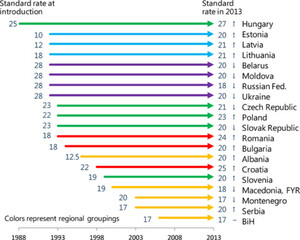 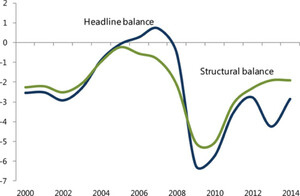 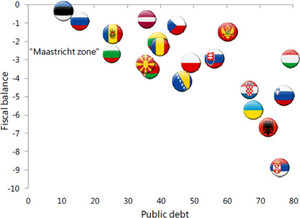