The mid-1990s saw continued rapid economic changes in the region, often amid considerable political uncertainty. For some countries, macro stabilization came earlier, and the main challenge was structural reform to improve the workings of the economy. For others, the task of developing market structures took much longer, and was carried out in a more difficult macro environment with inflation and fiscal deficits not yet firmly under control. This period saw considerable advances in both policies and economic outcomes in all transition countries, albeit with a lot of variance. Successful program implementation during these years proved to be a key determinant in sustaining economic growth and helping weather challenges in the years to come.

The mid-1990s saw continued rapid economic changes in the region, often amid considerable political uncertainty. For some countries, macro stabilization came earlier, and the main challenge was structural reform to improve the workings of the economy. For others, the task of developing market structures took much longer, and was carried out in a more difficult macro environment with inflation and fiscal deficits not yet firmly under control. This period saw considerable advances in both policies and economic outcomes in all transition countries, albeit with a lot of variance. Successful program implementation during these years proved to be a key determinant in sustaining economic growth and helping weather challenges in the years to come.

Globally, the mid-1990s was a period of integration, with the North American Free Trade Agreement coming into force in January 1994 and the World Trade Organization (WTO) being established a year later. Market reforms in many CEE countries enabled them to integrate into the global economy, with increased trade and capital flows. As a concrete indicator of progress, some became OECD members during this period—the Czech Republic in 1995, followed by Hungary and Poland in 1996.

At the same time, the region was overshadowed by war in the Balkans. After four years of the worst violence Europe had seen since 1945, costing well over 100,000 lives, the wars in Bosnia and Herzegovina and Croatia ended in 1995, although other conflicts in the region continued to take place through the rest of the decade. The Dayton peace agreement laid the grounds for governance in the new state of Bosnia and Herzegovina, a key element of which was an independent central bank and a currency board linking the exchange rate by law to the deutschmark. In the CIS, Belarus took (in hindsight, at least) a decisive turn away from the path of market reforms in the 1994 presidential elections, while in Russia, politics also greatly influenced economic policy in the lead-up to the Presidential elections in mid-1996.

Most countries had started growing by the mid-1990s, with the notable exceptions of the CIS and Bulgaria. Inflation declined in most countries, and to relatively low levels in Central Europe, the Baltics and some of Southeast Europe. This disinflation was reflected in exchange rates as well; whether fixed or floating regimes were followed, most exchange rates achieved some form of stability by 1995-96. In fiscal policy too, deficits were being brought under control, albeit more slowly in the CIS countries than in others.

By 1994, almost all transition countries had in place stabilization programs supported by the IMF, with objectives of advancing market reforms. The latter objectives were also supported by policy advice and financing from the World Bank, with the EBRD focusing on helping develop the private sector and encourage foreign investment. Country authorities faced major challenges in reducing state influence in economic activities, and increasing the role of the market. The reforms had to navigate shifting balances of power and interests, as old economic and political interests ceded (sometimes reluctantly) to new emerging players. The blank slate that transition economics presented also implied experimentation with different approaches.

Broadly speaking, the mid-1990s programs had five main objectives: (i) macroeconomic stabilization, (ii) price liberalization and current account convertibility, (iii) enterprise reform (principally, privatization—see Box 3), (iv) creation and strengthening of social safety nets, and (v) development of institutional and legal frameworks for a market economy. But the composition of the programs—as set out in their stated objectives—depended on country circumstances and political priorities:

Privatization was a key element of market reform programs in the region. Both in scale and approach it differed greatly from the occasional sales of large SOEs in the West that had popularized the term in the previous decade. Most transition countries had no private sector to speak of during the centrally planned years. Even those that did, such as Hungary and Poland, had private ownership mostly in the non-industrial sector, especially agriculture and small firms. Yugoslavia was unique in having a large cooperative sector with worker ownership of firms, but it posed similar challenges. After the collapse of communism, SOEs were ill-equipped to participate in new market mechanisms, and withdrawing the state from production was intended to increase efficiency and to harden the “soft budget constraints” that SOEs had enjoyed. With an unprecedented scale of privatization across countries, along with new enterprise creation, and “greenfield” foreign direct investment (FDI) in many cases, the share of the private sector in GDP rose rapidly over the 1990s.1

In most cases, small-scale privatization was achieved fairly quickly, generally by auction (often at low prices, with the objective of transfer of ownership rather than revenue) or, especially for property and land, via restitution. However, privatizing medium- and large-scale enterprises was more difficult, particularly when those enterprises were connected to sensitive industries and government revenue. For these enterprises, countries chose a range of different options:

Nontransparent transactions in some countries raised questions about the fairness of the process. The “loan for shares” scheme in Russia—devised in advance of the 1996 presidential elections, whereby select oligarchs managed to gain control of many large enterprises for a fraction of their underlying values—engendered great hostility towards the privatization program, and the reform agenda in general.

What did privatization achieve? One question is whether privatization in the region resulted in enterprises being put in the hands of those who could use them efficiently and productively. A literature survey by Djankov and Murrell (2002) suggests that privatized enterprises did restructure more quickly and perform better, but only when supporting legal and regulatory institutions were in place. Clear property rights, hard budget constraints, and adequate competition seem to have been necessary conditions to ensure a growth dividend. At the same time, privatization was not a choice for most countries in early transition: central governments were very weak, and de facto control of enterprises was rapidly migrating to private interests. The best policymakers could do was to try to steer this process to better outcomes through the approaches to privatization chosen.

1Husain (1994), for example, considers the impact of the withdrawing role of SOEs in the economy on private sector growth.

Program design tended to be ambitious, and in many cases implementation fell short of program objectives and targets. Generally, though, this was a period when most countries made progress in market reforms—which in turn was reflected in growth outcomes (Box 4). The change in EBRD transition indicators between 1993 and 1997 paints a useful picture in two dimensions: (i) “liberalization” indicators on prices, trade and foreign exchange, plus small-scale privatization; and (ii) “restructuring” indicators on competition policy, large-scale privatization, governance and enterprise restructuring. As discussed in Chapter I, liberalization was typically politically easier, and implemented ahead of the more controversial restructuring reforms. Almost all countries made progress in both dimensions. The CE5 and Baltic countries started ahead and stayed ahead—but many Southeastern European countries also made great strides. Despite the late start, most CIS economies moved forward significantly, especially in liberalization. But for many the progress would not be enough: most of the countries that ended this period with restructuring still far from complete ran into difficulties in the subsequent period, as described in Chapter VI. Conflict accounts for the lack of reform progress seen in Bosnia and Herzegovina and Serbia.

The initial stage of transition was marked by large drops in output. When countries did recover, they did so at markedly different speeds. What determined the pace of recoveries?

Is the speed of reform important? Indeed, analysis of recoveries in transition suggests that the pace of reforms was a significant determining factor. The “shock-therapy” transition in Poland, and front-loaded reforms pursued by most other Central European and Baltic (CEB) countries—albeit initiated from a better initial position—appear to be associated with quicker macroeconomic stabilization and lower transition-related losses in per capita incomes.

Also, strong reformers appear to recover their pre-transition levels of per capita incomes much faster than those that followed a more gradual reform strategy. Durational analysis performed for 16 emerging European economies highlights a strong empirical link between the probability of a country reaching its pre-transition per capita income level and its overall progress measured by EBRD transition indicators. Indeed, the probability of closing the transition-related slump in per capita incomes increased much faster in countries that front-loaded the reform effort (CEB countries) than in those countries that left their transition agenda partial and incomplete (SEE and CIS countries). 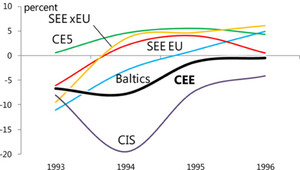 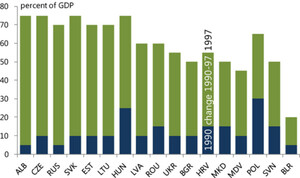 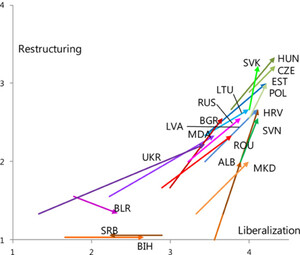