Many energy prices in many countries are wrong. They are set at levels that do not reflect environmental damage, notably global warming, air pollution, and various side effects of motor vehicle use. In so doing, many countries raise too much revenue from direct taxes on work effort and capital accumulation and too little from taxes on energy use.

Many energy prices in many countries are wrong. They are set at levels that do not reflect environmental damage, notably global warming, air pollution, and various side effects of motor vehicle use. In so doing, many countries raise too much revenue from direct taxes on work effort and capital accumulation and too little from taxes on energy use.

This book is about getting energy prices right. The principle that fiscal instruments must be center stage in “correcting” the major environmental side effects of energy use is well established. This volume aims to help put this principle into practice by setting out a practicable methodology and associated tools for determining the right price. The book provides estimates, data permitting, for 156 countries of the taxes on coal, natural gas, gasoline, and diesel needed to reflect environmental costs. Underpinning the policy recommendations is the notion that taxation (or tax-like instruments) can influence behavior; in much the same way that taxes on cigarettes discourage their overuse, appropriate taxes can discourage overuse of environmentally harmful energy sources.

Energy use is a critical ingredient in industrial and commercial production, and in final consumption, but it can also result in excessive environmental and other side effects, with potentially sizable costs to the economy. For example,

The Need for Fiscal Policies

Given the seriousness of the problems associated with fuel use, addressing them with carefully designed policy instruments is critical. Ideally, these policies should do the following:

All three features are important for balancing trade-offs between environmental protection and economic growth and enhancing prospects for sustaining and scaling up efficient policy. Fiscal instruments—environmental taxes or similar instruments (primarily emissions trading systems with allowance auctions)—can fully meet these criteria (in conjunction with complementary measures, such as research and development and investment in transportation infrastructure).

Fiscal instruments targeted directly at the sources of environmental harm promote the entire range of possibilities for reducing that harm. They can also produce a substantial revenue gain and, so long as this revenue is used productively—for example, to reduce other taxes that distort economic activity—environmental protection is achieved at lowest overall cost to the economy. Finally, and not least, if these instruments are scaled to reflect environmental damage, they avoid either excessively burdening the economy or, conversely, forgoing socially worthwhile environmental improvements.

“Getting prices right” is convenient shorthand for the idea of using fiscal instruments to ensure that the prices that firms and consumers pay for fuel reflect the full costs to society of their use, which requires adjusting market prices by an appropriate set of “corrective” taxes. In practice, many countries, far from charging for environmental damage, actually subsidize the use of fossil fuels. For many others, energy taxes—if currently implemented at all—are often not well targeted at sources of environmental harm, nor set at levels that appropriately reflect environmental damage. Clearly there is much scope for policy reform in this area, but there are also huge challenges, both practical and analytical.

From a practical perspective, higher energy prices burden households and firms and, even with well-intentioned compensation schemes, can be fiercely resisted. These challenges—not to understate them—are largely beyond the scope of this book; however, a complementary volume (Clements and others, 2013) distills lessons to be drawn from case studies of energy price reforms. Moreover, getting energy prices right need not increase the overall tax burden; higher fuel taxes could partially replace broader taxes on income or consumption (or environmentally blunt taxes on energy), broadening support for the policy. Where new revenue sources might be needed, corrective energy taxes are an especially attractive option because, unlike most other options, they improve economic efficiency by addressing a market failure.

The main focus here is on assessing the analytical challenges, that is, the pricing that needs to be put into practice. For the vast majority of countries, there has been no attempt to measure the magnitude of environmental damage across fossil fuel products—yet these measures are critical for actionable guidance to be given on how countries can get energy prices right.

The corrective energy tax estimates presented in this book should be treated with a good deal of caution, given data gaps, and controversies—for example, about the valuation of climate damage and the link between air quality and mortality risk. Nonetheless, the estimates provide a valuable starting point for dialogue about policy reform, scrutiny of the key uncertainties, and cross-country comparisons estimated on a consistent basis.1 Moreover, the impact of alternative assumptions on corrective tax estimates can be derived from accompanying spreadsheets.2 Although tax assessments may change significantly as evidence evolves and data improve, the basic findings—most notably, the strong case for substantially higher taxes on coal and motor fuels in many countries—are likely to remain robust.

In practice, there are complex political reasons why the bases and rates of energy taxes may diverge from the ideal, and why regulatory instruments are often the preferred approach. But a necessary first step for understanding the trade-offs involved between all the policy choices, and how political constraints might be met with minimal compromise to environmental, fiscal, or other objectives, is to provide some quantitative sense of the corrective energy tax system for different countries, which provides a benchmark against which alternative policies should be evaluated.

The techniques used for assessing various types of environmental damage are straightforward conceptually, although they require extensive data compilation.

The volume does not add to the contentious debate on climate damage but simply uses an illustrative damage value of $35 per metric ton of CO2 (US Interagency Working Group on the Social Cost of Carbon, 2013), combined with data on the carbon content of fuels, to derive carbon charges for all countries. (The implications of different damage assumptions, including zero damage for low-income, low-emitting countries, are easily inferred.)

The major problem from local air pollution is elevated mortality risks for exposed populations. For coal plant emissions, damage is assessed by first estimating how much pollution is inhaled by people in different countries based on combining data on power plant location with data indicating how many people live at different distance classifications from each plant (smokestack emissions can be transported over considerable distances). This pollution intake is then combined with baseline mortality rates for pollution-related illness and the latest evidence on the relationship between exposure and elevated risks, though substantial uncertainties surround this relationship. Health effects must then be monetized, which is a contentious exercise, but is done for illustrative purposes using evidence on how people in different countries value the trade-off between money and risk from numerous studies analyzed in OECD (2012). Finally, damage is expressed per unit of energy content or fuel use using country-level data on emission rates. The same approach is used to measure air pollution damage from natural gas plants. Damage from vehicle and other ground-level sources (which tend to remain locally concentrated) is extrapolated from a city-level database on pollution intake rates.

Traffic congestion costs imposed by one driver on other vehicle occupants are approximated by using a city-level database to estimate relationships between travel delays and various transportation indicators and extrapolating the results using country-level measures of those same indicators. Travel delays are monetized using evidence about the relationship between wages and how people value travel time. Accident costs are estimated based on country-level fatality data and assumptions about which types of risks drivers themselves might take into account versus those they do not, and extrapolations of various other costs, such as those for medical expenses, property damage, and nonfatal injury.

Getting energy prices right involves a straightforward extension of widely accepted and easily administered motor fuel taxes—better aligning the rates of these taxes with environmental damage and extending similar charges to other fossil fuel products (or their emissions). There are complications (e.g., charges should be based on emissions net of any application of emissions control technologies), but the issues should be manageable. The findings of this volume suggest large and pervasive disparities between efficient fuel taxes and current practice in developed and developing countries alike, with much (in fact, a huge amount in many countries) at stake for fiscal, environmental, and health outcomes.

The main challenge is how to get it done—how to build support for energy price reform. International organizations and others have an important role to play, first in promoting dialogue about best practice, and second in providing solid analytical contributions quantifying the benefits of pricing policies relative to alternative approaches, and assessing distributional implications to inform the design of compensating measures.

Outline of the Volume

The main findings of the report—the corrective tax estimates by fuel and by country, and rough estimates of the fiscal, environmental, and health benefits from tax reform—are presented in Chapter 6, which can be read without reading the preceding chapters for those who prefer to go straight to these results. The other chapters are organized as follows: A quick overview of energy systems, the nature of environmental side effects, and major fiscal policies affecting energy is provided in Chapter 2. Chapter 3 describes the case for and design of fiscal instruments to address environmental side effects. Chapter 4 then discusses the measurement of global, and in particular local, air pollution damage from fossil fuel use. The measurement of congestion, accident, and road damage costs associated with vehicle use is discussed in Chapter 5. Chapter 7 offers brief concluding remarks.

The estimates take into account extensive feedback from leading specialists and from participants at an expert workshop held at the IMF in April 2013.

All corrective tax estimates are for 2010 and, to facilitate cross-country comparisons, are expressed in 2010 U.S. dollars. Purchasing-power-parity (PPP) exchange rates should be used to express these figures in local currency (see www.imf.org/external/pubs/ft/weo/2013/01/weodata/index.aspx). 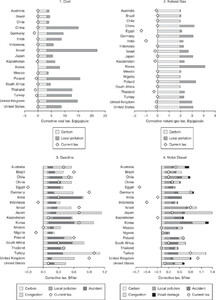 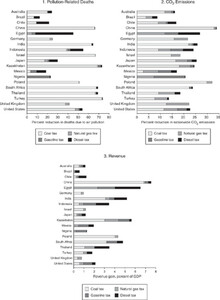