1. In the aftermath of the Argentine crisis, IMF members experienced a relatively calm period. There were few IMF-supported programs (Brazil, Turkey, Uruguay) under the Exceptional Access Policy (EAP—see chapter 3), largely due to balance of payments problems in the current account, and relatively few sovereign debt restructurings (e.g., Uruguay, Dominican Republic, Grenada, and Belize). However, imbalances and vulnerabilities were growing and subsequently erupted in 2007 [58].

1. In the aftermath of the Argentine crisis, IMF members experienced a relatively calm period. There were few IMF-supported programs (Brazil, Turkey, Uruguay) under the Exceptional Access Policy (EAP—see chapter 3), largely due to balance of payments problems in the current account, and relatively few sovereign debt restructurings (e.g., Uruguay, Dominican Republic, Grenada, and Belize). However, imbalances and vulnerabilities were growing and subsequently erupted in 2007 [58].

2. The Global Financial Crisis (GFC)—beginning in 2007 with the collapse of the U.S. sub-prime mortgage market and escalating with the failure of Lehman Brothers in 2008—led to the deepest global recession since the Great Depression. The ensuing global credit crunch required a swift and decisive policy response from the IMF, including through numerous IMF-supported programs under the EAP for members having lost market access. In 2008, the IMF modified its EAP to cover current account crises, as well as capital ones.

4. The GFC deepened and spilled over to euro-area members (Greece, Ireland, Portugal, and Cyprus). Balance of payments problems stemmed from fiscal and current account deficits (Portugal), fiscal and debt sustainability concerns (Greece), or financial sector crisis (Ireland, Cyprus). This stage of the crisis was marked by unprecedented concerns over contagion given the close economic and financial linkages within the currency union. Risk aversion also shot up for many emerging markets.

5. It was during this confluence of events in 2010 that Greece requested an exceptional access stand-by arrangement. The EAP required that debt be sustainable with “high probability”; staff was unable to determine that Greece’s debt met this standard. Concerned about the systemic consequences of a failure to provide financing, the IMF amended the EAP to allow the IMF to provide exceptional access financing to members, even if debt was not sustainable with high probability, if there was a high risk of international systemic spillovers [60]. This policy change essentially bought time for the euro-area to reorganize its crisis response architecture, but the change was controversial and recognized as imperfect.

6. Given the significant problems in the global architecture for preventing and resolving sovereign debt crisis exposed during the GFC, the IMF conduced a comprehensive review of its legal and policy framework to tackle these deficiencies in 2013 [58]. The following areas were highlighted:

7. An assessment of recent sovereign debt restructurings (e.g., Jamaica, Belize, Grenada) found that debt restructurings often did not adequately resolve debt problems. The conclusion was that debt restructuring often need to happen earlier and involve deeper debt reductions—private sector involvement (PSI) was often “too-little and too-late.” Furthermore, it was concluded that while the “systemic exemption” in the IMF’s EAP was necessary to tackle the euro-area crisis, it ultimately did not prevent contagion, and allowed some private creditors to avoid a “bail-in” [58].

8. The IMF policy response was to reform the EAP in 2016 by removing the systemic exemption and making the EAP more flexible. Importantly, it recognized that when debt sustainability is uncertain (i.e., debt is assessed to be sustainable but not with a high probability), the IMF could grant exceptional access if financing from other sources improves debt sustainability and sufficiently enhances the safeguards for IMF resources. In such cases, there would be a range of options that could meet such requirements, depending on the circumstances of the individual case. For example, in situations where the member retains market access, or where the volume of private claims falling due during the program is small, sufficient private exposure could be maintained without the need for a restructuring of their claims. In other cases, a reprofiling of existing claims (i.e., a short extension of maturities falling due during the program) would typically be appropriate [61, 62].

9. Prior to the crisis, the IMF’s debt sustainability analyses (DSAs) were often overly optimistic and did not focus enough on risks to market access and funding sources. This arguably contributed to the failure to anticipate debt sustainability crises and then to recognize their magnitude once they had begun (contributing to the “too-little, too-late” problem) [58].

10. This led to a wholesale redesign of DSA toolkit in 2013, which was rolled out to all advanced and emerging markets (“market access countries”). The revamped DSA moved to a more multifaceted framework for assessing sovereign debt risks, explicitly assessing market access and financing risks, recognizing the inherent uncertainty of debt projections, and scrutinizing the realism of assumptions underpinning the debt projections [63, 64].

13. The contractual approach to addressing collective action problems described in Chapter 3—i.e., the adoption of collective action clauses enabling a qualified majority of creditors to take a decision regarding the terms of the restructuring that is then binding on the minority—worked reasonably well after the widescale adoption of traditional collective action CACs in the 2000s. However, in the aftermath of the GFC, two weaknesses were exposed. First, the case of Argentina, where the interpretation by New York courts that the pari passu clause in Argentina’s international sovereign bonds required ratable payment to all creditors, raised concerns about the potential leverage for holdout creditors in future cases. Second, traditional CACs only enabled a restructuring of bonds series by series and thus allowed holdout creditors to impede a restructuring of one series if they could acquire a blocking position in that series [58].

14. In response, in 2014, the IMF reaffirmed its commitment to the contractual approach and endorsed key features of enhanced CACs and modified pari passu clauses for international bonds. Enhanced CACs enable decisions to be taken by a majority of creditors across all bond issuances, without the need for an issuance-by-issuance vote, subject to important safeguards to ensure inter-creditor equity across different issuances. A key advantage of having a single vote is that either no one is in or everybody is in, and enhanced CACs transfer legal leverage from individual creditors to the creditor group as a whole. The modified pari passu clause clarified that this clause does not require ratable payment to all creditors but only equal legal ranking [67]. Both clauses have since been very well accepted by the market and included in most bond issuances. However, a large outstanding stock with traditional CACs will remain for some time [68].

15. The IMF also took a fresh look at state contingent debt instruments, examining the case for instruments that link a sovereign’s repayment obligations to the underlying state of its economy. The paper highlighted the benefits of this type of instruments (e.g., for natural disaster risk and commodity price fluctuations) and suggesting practical steps to overcome some of the costs and constraints with their issuance [69].

[59] Review of Access Policy in the Credit Tranches and Under the Extended IMF Facility and the Poverty Reduction and Growth Facility, and Exceptional Access Policy, EBS/08/15, February 1, 2008; Acting Chair’s Summing Up, BUFF/08/30, February 29, 2008 (as reflected in the Public Information Notice).

[60] The Acting Chair’s Summing Up - Greece - Request for Stand-By Arrangement; Rule K-1 Report on Breach of Obligations Under Article VIII, Section 5 of the Articles of Agreement, BUFF/10/56, May 9, 2010. 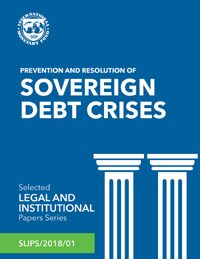