Latin America has enjoyed strong growth momentum during the last decade. While factor accumulation remains the main driver of GDP growth, the recent acceleration is mainly explained by higher total factor productivity (TFP). However, moving forward, this growth momentum might not be sustainable given some natural constraints on labor, despite recent capital and TFP trends.

Latin America has enjoyed strong growth momentum during the last decade. While factor accumulation remains the main driver of GDP growth, the recent acceleration is mainly explained by higher total factor productivity (TFP). However, moving forward, this growth momentum might not be sustainable given some natural constraints on labor, despite recent capital and TFP trends.

Highly favorable external conditions—interrupted only temporarily during the 2008–09 global financial crisis—coupled with prudent macroeconomic policies bolstered GDP growth in most of Latin America during the last decade. The Latin America and the Caribbean (LAC) region has grown by an average of 4 percent per year since 2003, compared with less than 2½ percent annually in 1980–2002 (Figure 3.1). But, what explains this remarkable growth performance from a supply-side perspective, and will this momentum be sustainable in the years ahead?

This chapter addresses these questions by identifying the proximate causes of the recent strong growth performance and estimating potential growth rates for the period ahead based on standard (Solow-style) growth accounting methodologies.1 Our analysis is based on a group of 19 LAC countries starting in 1980.2 First, we decompose the sources of output growth into accumulation of factors of production and total factor productivity. The results are compared with the region’s performance in the past as well as with other regional benchmarks. Then, we analyze the sustainability of the recent strong growth momentum by estimating the potential growth rate ranges using the production function approach. To this end, we use a battery of common filtering techniques to measure the trend of the subcomponents of output (namely, capital, labor, and TFP), smoothing out cyclical fluctuations. We then use these trend series obtained with alternative methods to compute potential growth rate ranges for each country rather than a specific point estimate. To investigate the sustainability of recent high growth rates, we explore possible constraints on factor accumulation for the region’s growth performance.

This study is, to the best of our knowledge, the first to examine growth decomposition while looking at potential GDP growth rates in LAC countries from a cross-country perspective with actual data extended to 2012. Existing research usually focuses on only one country or a small group of countries, typically analyzing long-term developments over a 30–40 year time-span; and importantly, the analysis is usually concentrated in the period prior to the global financial crisis.3 To incorporate the latest available data, we create a new database for the subcomponents of output using data from Penn World Table 7.1 and the latest IMF World Economic Outlook database.

Although there is consensus that the robust growth performance in recent years has been to a great extent due to favorable external conditions (namely strong global growth, high commodity prices, and easy external financing conditions) that fueled external and domestic demand, it is less clear what the main drivers were from a supply perspective. To examine the latter, we use a simple accounting framework that decomposes output growth into the contributions from the accumulation of capital and (quality-adjusted) labor, and changes in TFP (see Annex 3.1 for details on the methodology and data).

Our key findings can be summarized as follows (Figure 3.2):

Is the Recent Strong Performance Sustainable?

To address this question, we estimate potential growth rate ranges for 2013–17 in LAC countries using a simple accounting framework that decomposes trend GDP growth into the contribution of changes in capital and labor inputs and TFP.

We find that, if recent historical trends for capital and TFP continue, and given some natural constraints on labor, then the current strong growth momentum is unlikely to be sustainable. While the region has, on average, grown by 4 percent during 2003–12, our estimates suggest that the average potential GDP growth rate in 2013–17 is closer to 3¼ percent.7 Indeed, the strong GDP growth rates observed in recent years are higher than (or close to the upper bound of) the potential output growth ranges for 2013–17 in most countries (Figure 3.4).8

This envisaged growth deceleration (from the recent high growth to projected potential growth rates) reflects lower contributions from all sources in the coming years:

In light of the expected moderation in capital accumulation and the existing natural constraints on labor, the strong growth momentum in the region is unlikely to be sustainable unless TFP performance improves significantly.11 Although TFP contributed positively to GDP growth in recent years in most countries, its contribution was modest, especially considering cyclical issues and compared with other regions. Thus, fostering TFP growth remains a key challenge and priority for the LAC region.

The causes of low TFP growth in LAC countries are many and varied, and designing a policy agenda to unleash productivity is a difficult task. Policymakers should aim at policies that help reduce distortions in the allocation of resources, and this typically entails country-specific measures. Policies to be considered include: improving the business climate and enhancing competition; strengthening entry and exit regulation to facilitate the reallocation of resources to new and high-productivity sectors; improving infrastructure; promoting deeper and more efficient financial markets; enhancing research and development and innovation; and strengthening institutions to secure property rights and stamp out corruption. In the Caribbean, efforts are needed to tackle high debt levels and weak competitiveness, which have held back growth.

The potential growth rate is a good theoretical proxy for the long-term sustainable growth rate.

Labor productivity has been particularly strong in the services sector in 2003–12, with declining trends in the mining sector. See Sosa and Tsounta (2013).

These estimates are based on the assumption that both capital and TFP will grow at the average annual rate observed in 2000–12. This period covers a full economic cycle in most countries, whereas 2003–12 includes mainly the expansionary phase of the cycle. See Annex 3.1 for more details on our assumptions to project capital, labor, and TFP.

Mexico (strongly affected by the 2008–09 global financial crisis given its tight linkages with the U.S. economy) and Paraguay (owing to some idiosyncratic shocks) are exceptions.

In fact, the contributions to output growth of both changes in working-age population and the labor force participation rate have already narrowed significantly in 2003–12 compared with those of the 1990s. It is worth noting that these constraints on labor are less binding in countries with a large informal sector (e.g., Colombia, Mexico, Peru, and several Central American countries).

Although LAC region’s performance in terms of average years of schooling is relatively good compared with countries with similar income per capita, the quality of education has ample room for improvement (the region generally underperforms in terms of standard international tests).

Mobilizing higher domestic saving (which is low in the LAC region by international standards) could enhance the contribution of capital to long-term growth. Improving the quality of education would also help increasing potential output growth.

Our assumptions for the capital share of output, α, are country-specific and based on World Bank (2005) and are typically around 0.40 (in line with Gollin, 2002). Our main findings, however, are robust to a range of reasonable values for this parameter.

We include projections through 2017 to avoid the end-of-sample bias. 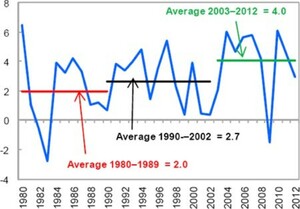 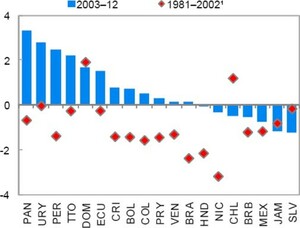 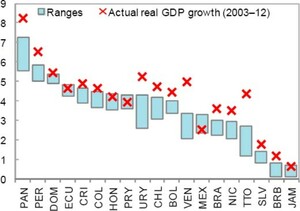 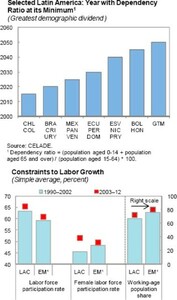