1. Fiscal transparency refers to the information available to the public about the government’s fiscal policy-making process. It refers to the clarity, reliability, frequency, timeliness, and relevance of public fiscal reporting and the openness of such information.

Fiscal Transparency and its Importance

1. Fiscal transparency refers to the information available to the public about the government’s fiscal policy-making process. It refers to the clarity, reliability, frequency, timeliness, and relevance of public fiscal reporting and the openness of such information.

2. Fiscal transparency is a critical element of effective fiscal management. It helps ensure that the economic decisions of governments are informed by a shared and accurate assessment of the current fiscal position, the costs and benefits of any policy changes, and the potential risks to the fiscal outlook. Fiscal transparency also provides legislatures, markets, and citizens with the information they need to make efficient financial decisions and to hold governments accountable for their fiscal performance and the management and use of public resources. And it facilitates international surveillance of fiscal developments and helps mitigate the transmission of fiscal spillovers between countries. Greater transparency can also help underpin the credibility of a government’s management of public finances and improve market confidence. Empirical evidence points to a positive relationship between the degree of fiscal transparency and sovereign credit ratings (IMF, 2012a).

3. The IMF’s Fiscal Transparency Code (the Code) is the most widely recognized international standard for disclosure of information about public finances (Box 1.1). The Code is part of the IMF’s efforts to strengthen fiscal surveillance, support policymaking, and improve fiscal accountability among its member countries. It is one of the 12 standards that have been recognized by the international community under the IMF and World Bank’s Standards and Codes Initiative launched in 1999 to strengthen the international financial architecture.2

The IMF has a long history in setting fiscal transparency standards dating back to 1998.

Source: IMF staff.1 The Asian financial crisis of the late 1990s highlighted shortcomings in financial reporting in both the public and the private sectors and regarding the linkages between the two (Lane and others, 1999). This led to the introduction of the IMF Code of Good Practices on Fiscal Transparency in 1998 as one of the 12 new international standards and codes designed to improve the functioning of the international financial system.2 See http://blog-pfm.imf.org/fles/ft-code.pdf.

4. In 2012, the IMF reviewed the state of fiscal transparency shortcomings that were revealed in the context of the 2008 global financial crisis and decided to update international fiscal transparency standards and monitoring arrangements (IMF, 2012a).3 The crisis revealed that, even among advanced economies, reporting by governments of their fiscal operations and finances was incomplete, as illustrated by the emergence of previously unrecorded deficits and debts. The crisis also demonstrated that, in many cases, countries had substantially underestimated the risks to their fiscal position and prospects, especially those emanating from the financial sector. The sharp deterioration in government finances that accompanied the crisis, and the related need for fiscal adjustment, increased the incentives faced by governments to engage in activities that clouded the true state of their finances (Irwin, 2012 and 2015).

5. The IMF’s new Fiscal Transparency Code, issued in 2014, is part of the renewed global interest in promoting fiscal transparency.4 Several other transparency initiatives in the fiscal area have been established, including the Organisation for Economic Co-operation and Development’s (OECD) Best Practices for Budget Transparency,5 the multi-stakeholder Extractive Industries Transparency Initiative (EITI) to address resource revenue transparency issues in resource-rich countries,6 and the International Budget Partnership’s (IBP’s) Open Budget Survey7 of information provided to citizens in budget documents. In addition, assessments under the multi-donor Public Expenditure and Financial Accountability (PEFA) program include a series of performance indicators covering aspects of fiscal transparency, which are derived in part from the Code. More recently, the Global Initiative on Fiscal Transparency (GIFT), a multi-stakeholder network, has promulgated a set of high-level principles of fiscal transparency, participation, and accountability.8 The OECD, with the participation of the GIFT network, has also recently developed a Budget Transparency Toolkit aimed at serving as a guide/gateway to existing standards and guidance materials and reinforcing some key practical messages in budget and fiscal transparency.9

6. The 2014 Code comprises a set of principles built around four “pillars” (Figure 1.1). Each pillar contains three to four dimensions, and each dimension, two to four principles.10

7. Reflecting the aftermath of the global financial crisis, the new Code updates the 2007 Code in several respects. It emphasizes the need for information that fosters good fiscal management and decision making in a postcrisis world where more attention is being paid to the full extent of government operations and the risks they entail. Specifically, the new Code

8. Several other standards and diagnostic tools have been developed by the IMF in the fiscal area that complement the Code. These tools analyze issues relating to transparency (Box 1.2).

Public Investment Management Assessment (PIMA) instrument, which evaluates 15 institutions that shape decision making at the three key stages of the public investment cycle: planning sustainable investment across the public sector, allocating investment to the right sectors and projects, and implementing projects on time and on budget (see http://www.imf.org/external/np/fad/publicinvestment/index.htm#3).

Tax Administration Diagnostic Assessment Tool (TADAT) (jointly with other partners), which is designed to provide an objective assessment of the health of key components of a country’s system of tax administration (see http://www.tadat.org/overview/overview.html).

10. FTEs are carried out at the request of governments and form part of the IMF’s policy dialogue and capacity-building efforts with its member countries. They support the identification of fiscal transparency strengths, weaknesses, and challenges as well as the prioritization and delivery of technical assistance by the IMF and other development partners. Many FTEs, across a broad spectrum of countries, have been completed.14

11. An analysis of completed FTEs reveals that fiscal transparency levels vary both across and within countries and are positively correlated with the level of income (Figure 1.2). While low-income countries have generally scored relatively lower than emerging market and advanced economies, there is scope for countries at all income levels to improve practices, particularly in fiscal reporting and fiscal risk analysis and management.

12. FTEs have an important part to play in providing input to the IMF’s surveillance through exposing strengths and weaknesses in institutional public financial management frameworks. In several cases, findings and recommendations from FTEs have fed into IMF’s country reports in the context of Article IV or other surveillance-related missions.15

The Role of the Handbook

13. This Handbook explains the 2014 Code’s principles and practices and provides more detailed guidance on their implementation. In particular,

14. The Handbook aims to provide guidance on the application of the Fiscal Transparency Code to a range of stakeholders.

16. This Handbook covers Pillars I to III of the Fiscal Transparency Code.19 The three following chapters cover each pillar, respectively. 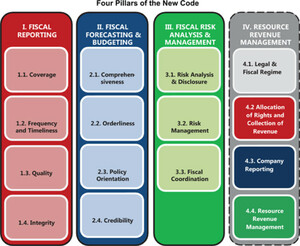