Macroeconomic policymakers in emerging Asia are facing several broad challenges. First, central banks need to deal with inflationary pressures arising from the surge in international oil prices, without endangering the recent improvements in domestic demand. Second, governments are trying to reduce their debts, while attempting to create the fiscal space needed to meet the costs of population aging and upgrading public infrastructure.

Macroeconomic policymakers in emerging Asia are facing several broad challenges. First, central banks need to deal with inflationary pressures arising from the surge in international oil prices, without endangering the recent improvements in domestic demand. Second, governments are trying to reduce their debts, while attempting to create the fiscal space needed to meet the costs of population aging and upgrading public infrastructure.

Central banks in emerging Asia are facing a delicate balancing act. They are addressing the inflationary pressures that have arisen from the doubling of international oil prices between the end of 2003 and end-2005. But at the same time they are being careful to avoid undermining the nascent recovery of domestic demand.

The rate increases have effected a modest tightening of the monetary stance. While the increases have essentially matched the rise in headline inflation, they have exceeded the rise in the more relevant index—core inflation, excluding the inevitable impact from the doubling of world energy prices. Relative to core inflation, real policy rates have increased by 1.3 percentage points in emerging Asia since the start of the current tightening cycle, with over half of the increase—0.8 percentage points—occurring since the middle of 2005.2 Within the region, the largest increase in real rates has occurred in India (4.4 percent), reflecting a marked decline in core wholesale price inflation.

Headline inflation is projected to subside over the course of 2006. One reason is that expectations of inflation seem generally well-anchored. As of March of this year, the private sector consensus forecast for average inflation in emerging Asia in 2007, when base effects from fuel price increases will have come off, is just 3.4 percent. For the ASEAN-4, the consensus forecast for 2007 has increased to 4.7 percent, 1.1 percentage points higher than the 2005 forecast made two years ago—a significant increase, but still small compared to the large increase in headline inflation.3

Policy challenges remain, however, since the inflation outlook is not without risk. One key risk lies in the narrowing interest differential between emerging Asia and the United States. This differential has narrowed to around 50 basis points, from above 240 basis points before the current tightening cycle began. Even for the ASEAN-4, where the nominal increases in policy rates have been the largest, the interest differential remains well below its historical average.

So far, the small interest differential has proved sustainable because risk premia have fallen, especially for the ASEAN-4. Using the uncovered interest parity condition to recover a one-year-ahead local currency risk premium relative to the U.S. dollar suggests that the risk premium for the ASEAN-4 had fallen below 2 percent as of February 2006, compared to an average of above 4 percent since mid-2003.4 Excluding Indonesia, this premium had fallen to just 0.3 percent. To a certain extent, the decline in risk premia reflects a recognition of ongoing reforms that are improving macroeconomic stability and growth prospects. But it is also due to abundant global liquidity.

Consequently, risk premia could rise again as global liquidity conditions tighten. If the U.S. Federal Reserve and other major central banks continue to raise policy rates, further eroding Asia’s interest spreads, the regional balance of payments may weaken and currencies could begin to face downward pressure. As a result, even taking into account the dampening effects from a jump in risk premia on domestic demand, headline and core inflation rates could rise, and inflation expectations could increase, as well. The dangers are particularly high in countries which still need to pass on the global oil price increase into domestic prices, for in these countries external pressures could coincide with supply-side shocks from domestic price adjustments. (Countries where pass-through remains incomplete include China, Malaysia, India, and Indonesia.)

Should such a scenario materialize, it would present central banks with a policy dilemma, for further rate increases could undermine economic growth. The dilemma would be particularly acute in some of the ASEAN-4, where the rollover and foreign exchange risk associated with high levels of public debt (Philippines, and Indonesia and Thailand to a lesser extent) could force monetary policy to tighten even as domestic demand is weakening. This dilemma is less pronounced in the NIEs, where external positions are stronger, allowing monetary policy to accommodate still weak domestic demand. By contrast, in India, where domestic demand has long been strong, both robust credit growth and the growing importance of return-sensitive portfolio flows in financing the current account deficit suggest that further tightening may be needed going forward.

Finally, in Japan incipient price pressures have been welcomed, as they signal an end to a prolonged period of deflation and depressed demand. As a result, the BoJ in mid-March announced that it was exiting from its quantitative easing policy, under which it targeted sizeable excess reserves of commercial banks. In taking this step, the BoJ noted that the necessary conditions have been met: stable positive y/y core CPI inflation and expectations that this would continue. With this change, the central bank has returned to targeting the overnight call rate, which it expects will remain “effectively at zero” for the time being. As part of this change, the BoJ also announced a new framework for monetary policy, which includes defining price stability to be y/y CPI inflation between zero and two percent, a range that will be reviewed annually. The BoJ will also report on its monetary policy view in a semiannual report.

On the fiscal side, governments have been trying to improve their fiscal positions. Across the region, there are a variety of reasons for doing so.

Governments in emerging Asia have made some progress in improving their fiscal positions in the past year. For this region as a whole, government debt was cut by about 1¾ percentage points to an estimated 37 percent of GDP. Most significantly, the average debt to GDP ratio in the ASEAN-4 countries is estimated to have fallen by 4½ percent in 2005, bringing the ratio down to 51 percent, significantly below its 1997 level. Similarly, the stock of general government debt in India is estimated to have fallen by 2½ percentage points to 84 percent of GDP last year. Against this, the average debt-to-GDP ratio for the NIEs continued to rise last year, and is now well above pre-crisis levels, but at an estimated 32 percent of GDP it remains relatively low.

The expected fiscal adjustment is driven largely by an increase in revenues, which is primarily due to new policy measures. This continues a trend of recent years, in which the revenue-to-GDP ratio has grown steadily. In India, a modest broadening of the tax base is planned, complementing an earlier drive to improve tax administration and the introduction last year of a VAT at the state level. In the ASEAN-4, the rise in the revenue to GDP ratio is expected to continue, reflecting measures such as an expansion of the tax base for VAT and a VAT rate hike in the Philippines. This continues a steady rise of the revenue to GDP ratio in the ASEAN-4, which has increased from 19½ percent in 2002 to an estimated 20¾ percent in 2005, reflecting a combination of additional tax measures, improved collection, and a revenue lift from high oil prices in the case of oil exporters (Indonesia and Malaysia). In the NIEs, revenue to GDP is expected to remain stable, while past increases in the revenue to GDP ratio were largely driven by improvements in tax administration, which also appears to be the case in China.

Meanwhile, spending is expected to remain stable, albeit with further marked shifts in allocations amongst expenditure categories. In recent years, interest payments have been shrinking, for several reasons including the reduction in debt stocks in the ASEAN-4, a strengthening of regional currencies, and a general fall in global and domestic interest rates. In the NIEs, interest payments, already low by regional standards, have fallen steadily in importance, while in the ASEAN-4 countries they declined to 2¾ percent of GDP, after peaking in 2001 at 4¼ percent. These reductions have created space for an increase in spending on social welfare outlays, notably for pensions, health insurance, welfare for poor households and unemployment insurance payments.

Looking ahead, capital spending, which has contracted sharply in the ASEAN-4 and the NIEs in recent years, is expected to grow rapidly in the coming years. To meet the challenge of growing infrastructure needs, countries in emerging Asia are adopting different strategies:

Though the rate of remuneration on excess reserves was reduced in March 2005, and local currency deposit and lending rates were increased in October 2004.

These calculations are based on simple averages of real policy rates in emerging Asia.

Among the ASEAN-4, inflation expectations for 2007 are highest in Indonesia, and are above the inflation target in the Philippines, calling for continued policy vigilance.

Risk premia are calculated as (i-i*) - E(Δe) where i and i* are secondary market rates on a one-year local currency bond in an ASEAN-4 country and in the United States, respectively, while E(Δe) is the one-year-ahead expected depreciation of the exchange rate against the U.S. dollar from Consensus Economics. In contrast to the bond spreads in Chapter II, these risk premia capture currency risk in addition to sovereign default risk. See R. Balakrishnan and V. Tulin, “The Risk Premium on the U.S. Dollar,” (forthcoming).

(1=poorly developed and inefficient, 7=among the best in the world) 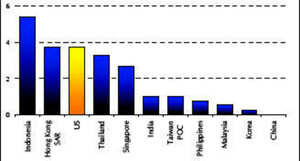 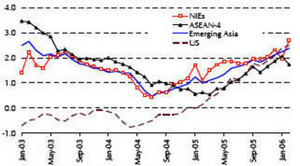 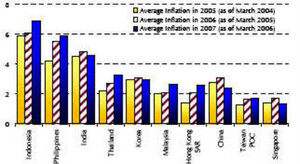 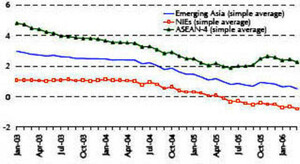 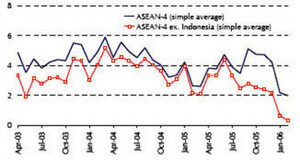 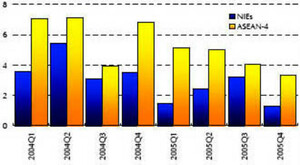 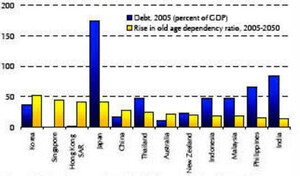 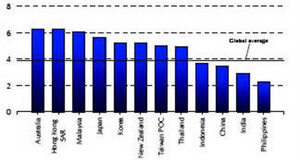 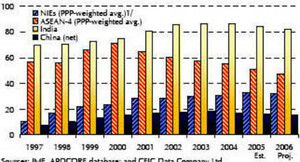 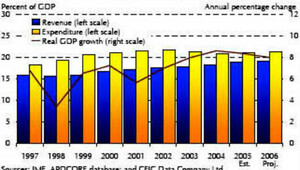 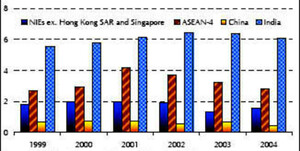 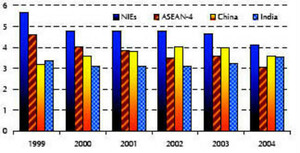