Jump to Content Jump to Main Navigation
What it will take to achieve the goals
Author: International Monetary Fund

Stronger voices for the poor, economic stability and growth that favours the poor, basic social services for all, open markets for trade and technology, and enough development resources, used well

Stronger voices for the poor, economic stability and growth that favours the poor, basic social services for all, open markets for trade and technology, and enough development resources, used well

The Republic of Korea, Malaysia and Morocco belong to a select group of countries that halved the proportion of their people living in poverty in less than a generation. So did the Indian states of Haryana, Kerala and Punjab. Another dozen countries—including Botswana and Mauritius—reduced poverty by a quarter or more in a generation. Other countries can learn much from the well-documented lessons of this experience, for if it has been done, it can be done again.

Voices and choices for the poor

Empowering poor people is the starting point—providing opportunities for women, opening political space for poor people to organise. Democratisation has to go beyond simple rule by the majority to include minorities in all aspects of political participation—in cabinets, legislatures, civil services and local governments. Such inclusive democracy promotes an independent judiciary, an open civil society and a free media—all of which can ensure respect for human rights and make governments accountable for their promises and actions.

A commitment to respect fundamental human rights and the rule of law is a critical prerequisite for sustainable development. Half the world’s countries have ratified all six human rights conventions—up from a tenth of countries just 10 years ago. This is significant because, by ratifying treaties, countries open themselves to being held accountable for their actions.

Economic growth is not a guarantee of poverty reduction—but it is absolutely essential for sustaining poverty reduction over the longer run. And it needs to be pro-poor. How? It has to generate more income-earning opportunities so that poor people can engage in productive and well-paid work, it has to give poor people more access to assets to help unleash their productive potential and allow them to feed themselves. And it has to be fair in creating better opportunities for poor women. This will require measures to strengthen women’s land rights, increase their bargaining power and broaden their access to credit, training and new technology.

Many countries today need substantially faster pro-poor growth, among them the 30 developing countries whose real per capita incomes are lower today than they were 35 years ago. That growth will be built on increased production among the poor themselves: by productivity increases among small farmers; by small enterprises, both rural and urban; by informal producers and by the many women and men providing a host of small-scale services.

What a country invests in basic health and education signals its commitment to long-term development. At the Copenhagen Social Summit in 1995 the world’s leaders suggested as a rough guideline that 20% of budgetary expenditure and 20% of aid flows should be allocated to basic social services. The objective was for countries to have a healthy, well-educated workforce, able to compete in the global economy. Although the budget allocations to basic social services have recently increased in many countries, such as the Dominican Republic, Guatemala, Malawi and Namibia, few developing countries or donors meet the guideline.

Over the past 40 years, trade has grown faster than global output. But heavily protected economies and those dependent on commodity exports have lagged behind or suffered from price fluctuations. More countries now recognise the advantage of open trade, which boosts their exports and increases their capacity to import.

Economic policies must also be sound, well balanced and sustainable. This requires strengthening national institutions to build the capacity to implement the right economic and social policies.

Basic social services for all

Policies have to go beyond the purely economic to focus on the needs of the poor—to ensure minimum social standards and universal access to basic social services. Countries have to invest in education—especially girls’ education, which produces one of the highest payoffs in development. They also have to deliver high-quality and cost-effective services to the poor—health care, water, sanitation and other basic services. Part of this is ensuring action to reduce malnutrition, with a special focus on women of child-bearing age and young children. Countries also have to provide safety nets for the vulnerable in times of crisis.

Globalisation offers enormous opportunities to the developing countries—better ways of tapping the world’s knowledge, better technology for delivering products and services, better access to the world’s markets. But taking advantage of the opportunities requires action. Countries have to lower their tariffs and other trade barriers and streamline their systems for the flow of imports, exports and finance. They also have to manage their inflation, interest and exchange rates—to be seen as good places for doing business. And they have to maintain consistent policies—to be credible to investors, both domestic and foreign. The high-income countries have their part to play too—reducing tariffs and other trade barriers to imports from developing countries and providing assistance to build the capacity to trade effectively.

Not all countries are enjoying the possible benefits, however. With a legacy of poor policies and poor performance, too many of them are being left behind in trade, in finance, in technology, in ideas—in precisely the things that could help them grow and reduce poverty.

The cost of telecommunications plummeted in the past two decades, opening the opportunity for the use of cellular telephones by, say, cocoa traders in Ghana who need to know world prices. And now the Internet offers email, online training and an infinity of resources on the Web. These resources have become a reality for some, but clearly not for most. So a major challenge is to plug all of civil society, all of developing country business, into the networks that offer so much. To grasp this opportunity will require major investments in telecommunications.

One thing countries can do to raise more money for development is to build their capacity to collect taxes, not from the easy sources of tariffs and licenses, which make the allocation of resources less efficient, but from a broad base of equitable taxation. The tax system should also be set up in ways that do not invite corruption.

Effective and equitable use of resources for development

Development costs money. Much comes from the investments by people—and much from the investments by government. What has spurred the growth of many East Asian countries is their high savings rates, often more than 30% of gross national product. That’s allowed them to invest in infrastructure and social services. Many African countries, by contrast, have had savings rates of only 10-15% of national income, too low to sustain growth fast enough to lift more people from poverty.

It’s important for countries to spend wisely—on basic services for the poor, not on subsidised services for the rich, and on sound investments for future development. How governments spend their money matters as much as what they spend it on. Instability and unpredictability in government expenditures make progress in poverty reduction more difficult. The quality of people that governments recruit also makes a difference. Governments that hire and promote based on merit perform better than those that give the best jobs to friends and political allies.

External aid plays an important part in supporting development, especially in poor countries. There is a growing consensus that country ownership of development policies and country leadership in development programmes are essential for success—and that donor procedures and reporting need to be co-ordinated and harmonised to reduce administrative burdens. Donors and international financial institutions are now working more closely with developing countries on strategies for poverty reduction, formulated through a participatory process and driven by countries. They are also being more selective in the kind of aid that goes to a country, better ensuring that it is tailored to country priorities and local needs.

Donors realise the need to build strategic partnerships that capitalise on each partner’s intrinsic strengths, reflect shared goals and objectives and build on existing achievements. Working in partnership with developing countries, the high-income countries need to supply more aid. They also need to provide more and faster debt relief. They need to offer easier access to their markets, including duty-free and quota-free access for poor countries. And they need to finance programmes of benefit to many countries, such as research on vaccines for tropical diseases. These are the essential ingredients for promoting growth and reducing poverty in the poorest and least developed countries. These are also essential for reducing human suffering and the number of violent conflicts, sustaining the environment and stemming the spread of such global threats as HIV/AIDS.

Most OECD countries have adopted a target to provide 0.7% of their GNP as aid, but only Denmark, the Netherlands. Norway and Sweden have met this. Worse, the inclination to help developing countries declined in the 1990s. In just five years, from 1992 to 1997. OECD aid fell from 0.33% to 0.22% of GNP, a decline that halted in 1998 and 1999. Donors need to provide more aid to poor countries, especially to those that use it effectively. Accelerated debt relief to the most heavily indebted poor countries will help to support national strategies for poverty reduction.

Some regions rely almost entirely on aid for their external finance. Private capital flows can add much to what countries put into their development efforts. But these flows are concentrated in fewer than 20 developing countries, and some types of these flows, such as bonds and bank lending, can be volatile. Countries need to create the conditions that attract longer term investments from overseas as well as locally. Mozambique and Uganda are beginning to do just that.

Proportion of countries with democratic governments (%)

Number of countries that have ratified the treaties

The growing importance of trade

Exports and imports of goods ($ billions)

Crossing the digital divide is essential for being competitive

Many countries could do more to mobilise their own resources

Aid, on the decline in the 1990s, needs a major boost, especially for the poorest countries 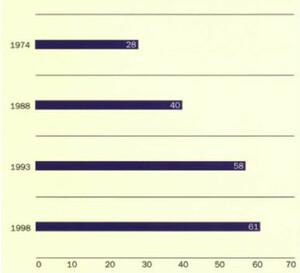 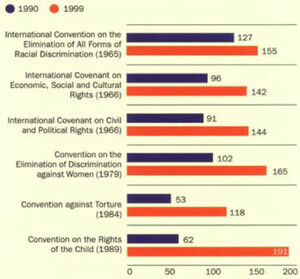 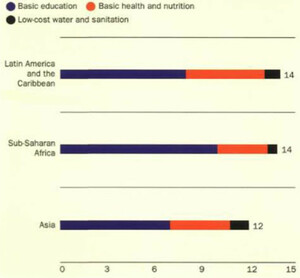 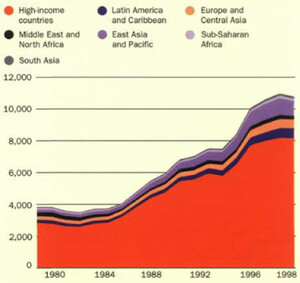 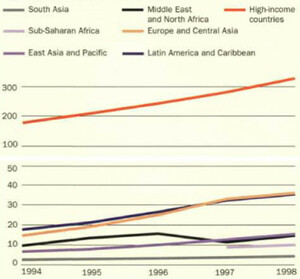 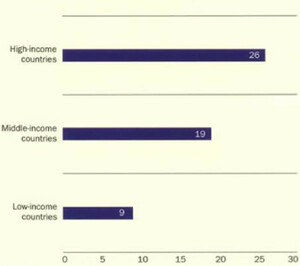 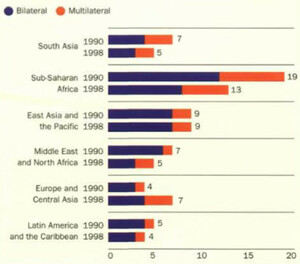 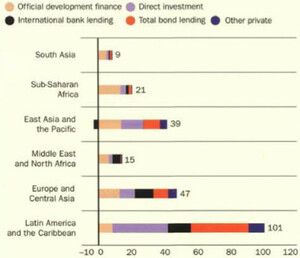